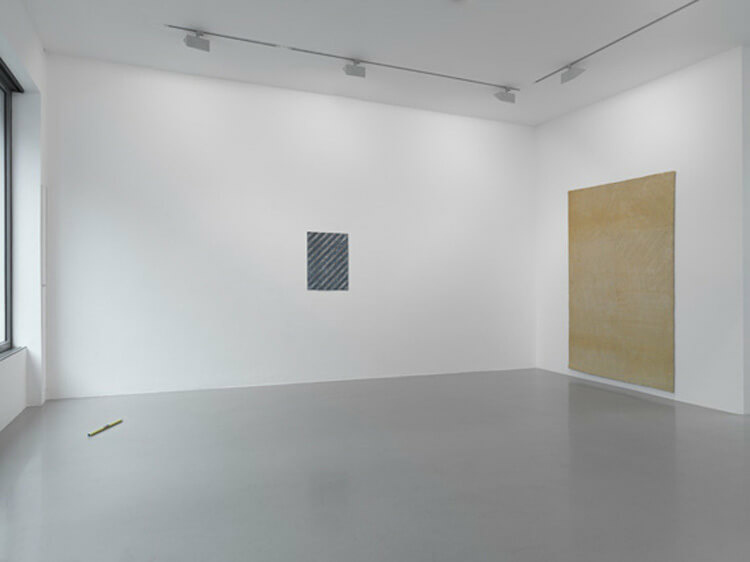 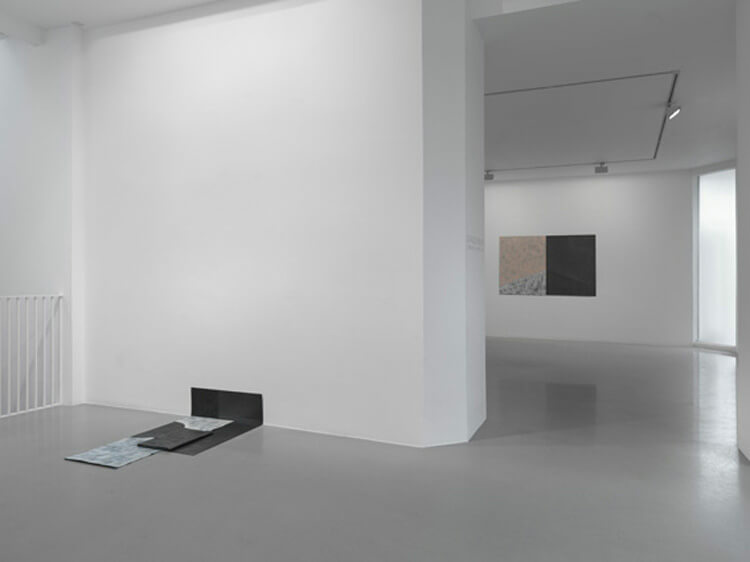 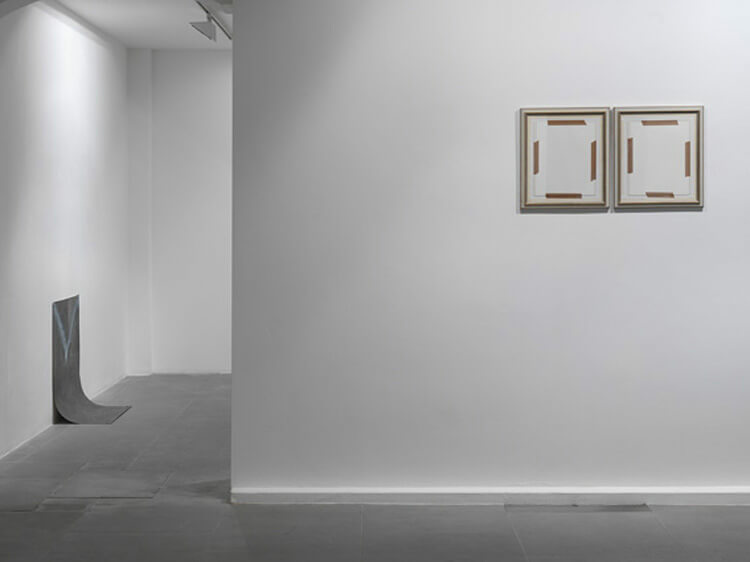 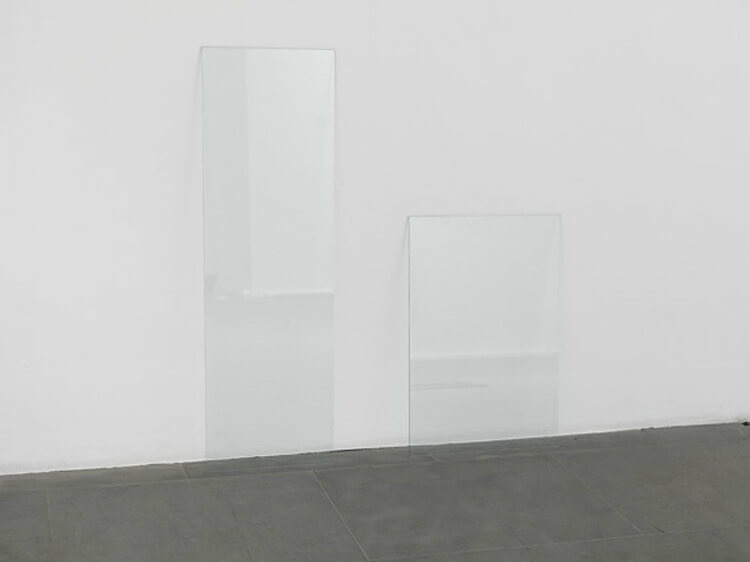 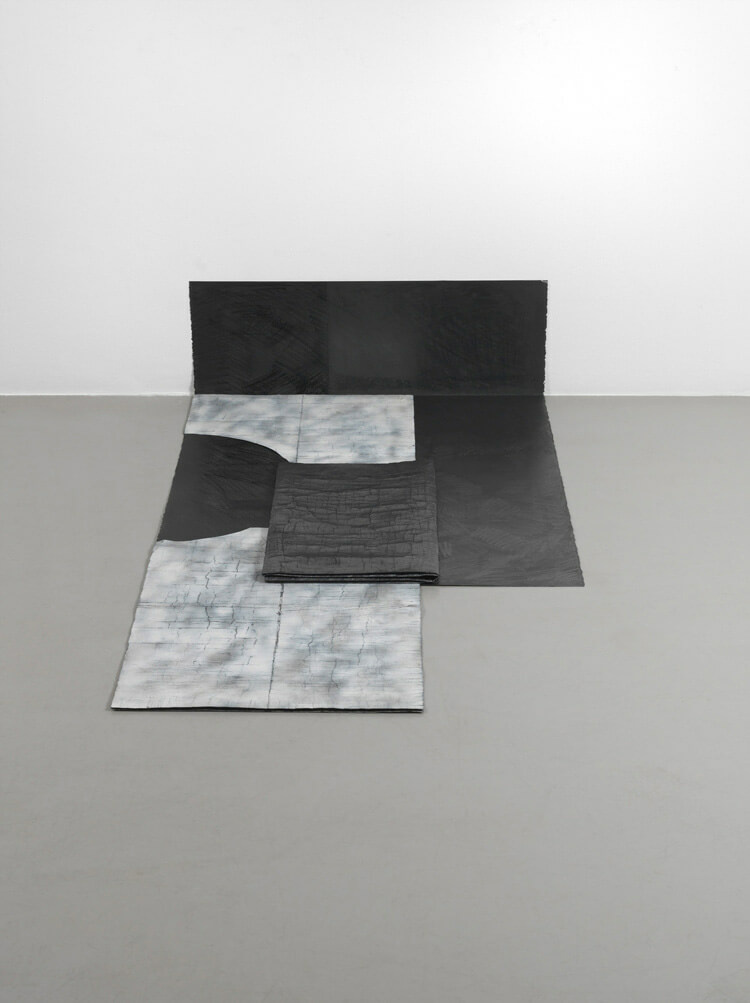 graphite and spray enamel on paper with metal grommets 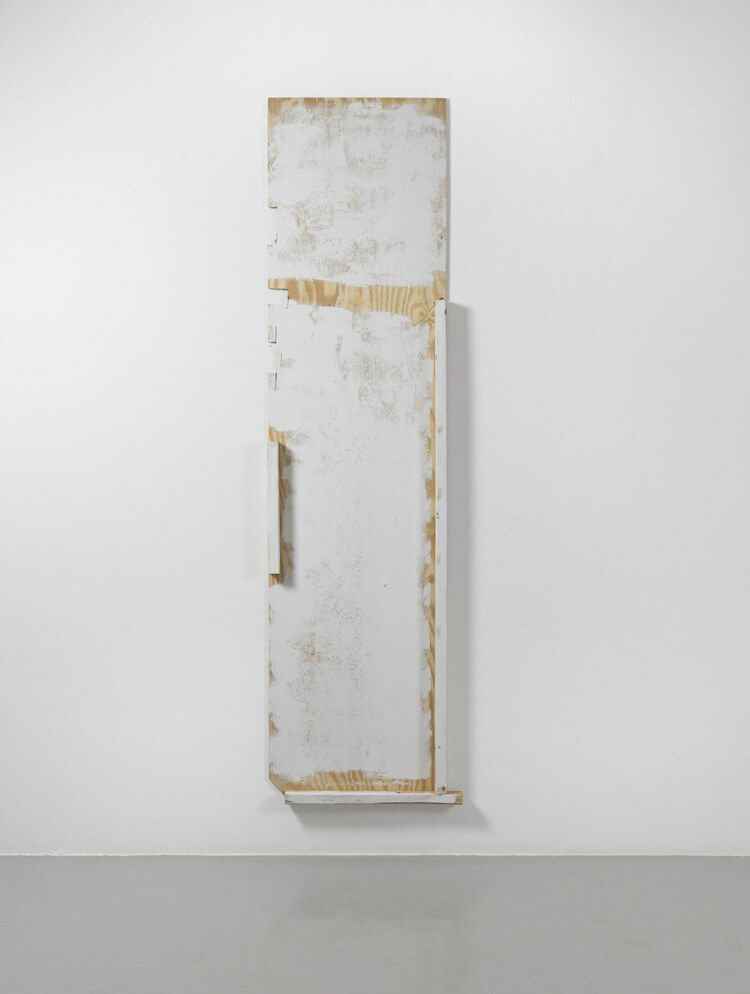 Lisson Gallery is pleased to announce a three-person exhibition of new works by Kitty Kraus, Dan Shaw-Town and Gedi Sibony. The works in the show explore the unifying aesthetic and interest in unconventional materials and sculptural practices shared by these three geographically and methodologically disparate artists.  The exhibition will be the first time that these artists have shown work with Lisson Gallery.

Kitty Kraus’ installations explore the physical processes that govern how materials behave. Through Kraus’ interventions small-scale objects act in unexpected ways, transforming and expanding to fit their environment. Glass explodes through overheating and dyed black ice melts across the floor as the potential instability of seemingly ordered materials is revealed. Kraus also works extensively with sheet glass, exploring its fragility and often attempts to push the large sheets almost to their breaking point to achieve a desired quality within the material. Throughout her practice Kitty Kraus imposes a constant state of tension and within her sculpture. This action causes her sculptural objects to either visibly alter over a short period of time or create an expectation that there will be a violent and sudden change, which never comes.

Dan Shaw-Town’s work possesses a polished quality that belies his intricate and layered use of materials and the utilitarian nature of his installation process. Using traditional processes of mark-making with graphite on paper, he folds, crumples, flattens and reworks drawings so that they become simultaneously polished and worn to unveil their hidden potential. The precision with which works are formed becomes apparent only on close contact: every stroke and mark placed carefully. Drawings are erased, sanded and painted to achieve a wide array of surfaces and textures, many of which seem at first to sit uncomfortably on the paper. Many works blur the distinctions between drawing and sculpture, even on occasion becoming folded objects placed on the floor hiding much of their heavily worked surface on their interior.

Gedi Sibony’s installations make use of carefully sourced and often used materials such as cardboard, plastic sheeting, carpeting and wood. Placed on view largely unaltered, these humble objects intrude upon and define their environment, occupying voids and spaces and imbuing them with a poetic quality. Sibony’s aesthetic sensibility relies on the details within a material or object: glorifying and celebrating their construction and hidden qualities. The fragility of materials often viewed as ‘junk’ causes the viewer to reassess the objects’ original intended use, construction and history. The dissection and re-appropriation of objects throughout Gedi Sibony’s work causes a shift in how these materials are absorbed by the viewer, the appropriated objects become skeletal remains of their original form while also becoming precise assemblages in their own right.