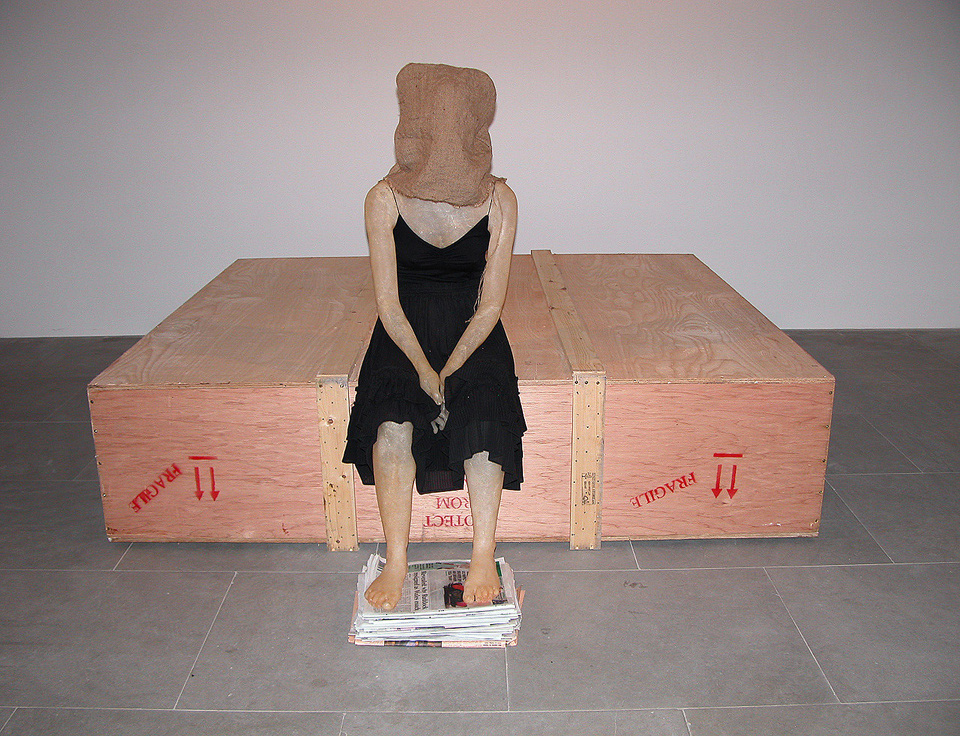 Lisson Gallery is pleased to announce an exhibition of new paintings and sculpture by Julião Sarmento, his first solo show in London since 2002.

This exhibition is comprised of new mixed media paintings and a sculpture that extend Sarmento’s continuing fascination with the transgression of boundaries and the dichotomies those transgressions often illuminate, such as spirituality and eroticism, sexuality and morality, speech and dialogue. By silk-screening fragments of text from an essay by the French thinker Maurice Blanchot directly onto the surface of the paintings, he integrates language with his iconic images.

The number three often recurs throughout Sarmento’s practice; in this exhibition it is manifest from his use of his three signature colours: yellow ochre, burnt sienna and grey, to the de-contextualised dialogue he creates via himself, Blanchot and Bataille.

Further reflecting his interest in the notion of trilogy, each painting relies on three key elements; the silk screened texts by Blanchot, the female figures and hand- drawn phrases such as I Love You Too Much and You Take My Breath Away, which are also the titles of the works. The gallery space too becomes part of the work, as the architecture containing each group of paintings he installs by colour in three separate rooms.

Responding to the vaguely oppressive lower-ground gallery space, Sarmento has cast a single life-size sculpture from resin and fibreglass entitled I Love You Too Much (with crate), 2006. In all of his depictions of female figures, Sarmento avoids his work becoming portraiture by omitting the face. Far from making a ‘statement’ however, the absence of facial features enables his female forms to remain purely figurative. “The moment you add even so much as a nostril or the hint of a mouth, you begin to give the figure the specific identity. This is never my intention.”

Julião Sarmento lives and works in Estoril, Portugal. Born in 1948, he has exhibited worldwide since his first show in 1969. He has been included in two Documentas and three Venice Biennales. His work is represented in public and private collections worldwide, including The Hirshorn Museum and Sculpture Garden, Washington D.C., the San Francisco Museum of Modern Art, The Guggenheim Museum, New York; MoMA, New York; the Musée National d’Art Moderne Centre Georges Pompidou, Paris; the Van Abbemuseum, Eindhoven; and the Hara Museum of Contemporary Art, Tokyo.