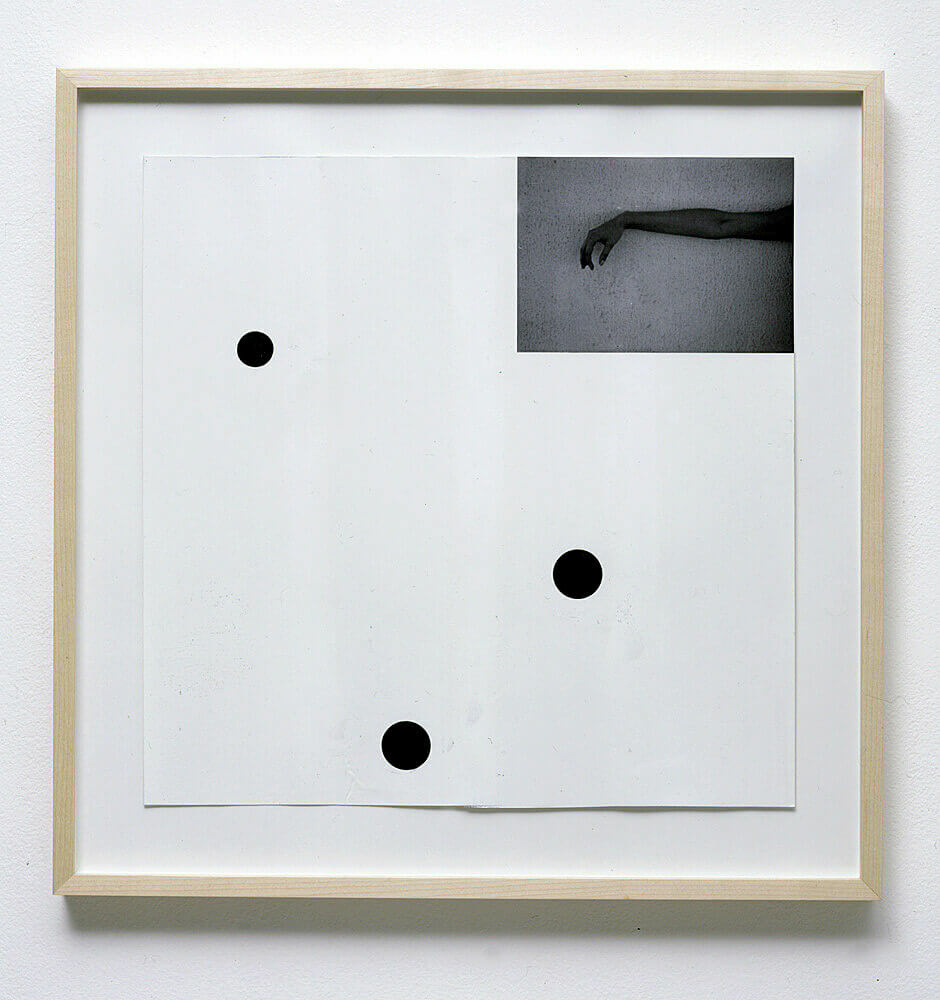 Julião Sarmento’s work over the last 26 years shows an intimate and passionate pre-occupation with desire exploring the realm of the speculative and gestural. Within his work there is no chronology, no unfolding narrative, no apparent logic, simply glimpses of experience that give visual form to primordial desires, ones we feel yet cannot define. Working with various media including paint, print, photography, sculpture and video his work illustrates the persistence in his determination to define the intangible gap between experience and memory, now and then.

Seemingly hiding behind the banal, Sarmento appropriates a multitude of motifs, the placement of a hand or the touch of a finger forming a secret camouflage within the ordinary. Through the power of the gaze, the viewer is invited to invent their own narrative by piecing together each captured moment from apparently arbitrary or unconnected episodes. In doing so, this undermines the chronology of one’s memory to form a series of fictional scenarios.

Sarmento has been known more for his paintings than for his films. However, this exhibition makes it clear that both mediums of film and painting allow him to fully explore the themes of his work.

His recent work delves into the notion of repetition and highlights an incidental moment that appears the same but not the same; the simultaneous existence of doing the same things over and over. Of double identity or déja vu.

Sarmento has created a new film for this exhibition also entitled Doppelgänger 2001. This focuses on the idea of the doppelgänger, or doubling. Sarmento films two women who do not look alike yet behave identically although in different situations. A painted diptych presents the headless bodies of the women which are featured throughout the show. Double screens, painted diptychs, doubling of bodies whose identity is no longer distinguishable appears to be the underlying focus of the work. With the use of two-screen installations Sarmento shows two existences, which are eternally stuck, doubled and intertwined.

The viewer will never know which one is which as they both will continue to exist with each other’s identities. A single canvas merges both bodies so they indistinguishably become one conjuring a perverse sexual tension. These characters are eternally imprisoned within each other.

Sarmento has exhibited extensively over the years throughout Europe and America. His recent solo exhibitions include the Reina Sofia Museum, Madrid,

Fundação Calouste Gulbenkian, Lisbon Hirshhorn Museum and Sculpture Garden, Washington DC and the Stedelijk Van Abbemuseum, Eindhoven. In 1997 he represented Portugal in the Venice Biennale. This exhibition will be Sarmento’s first solo show at the Lisson Gallery. He lives and works in Lisbon.