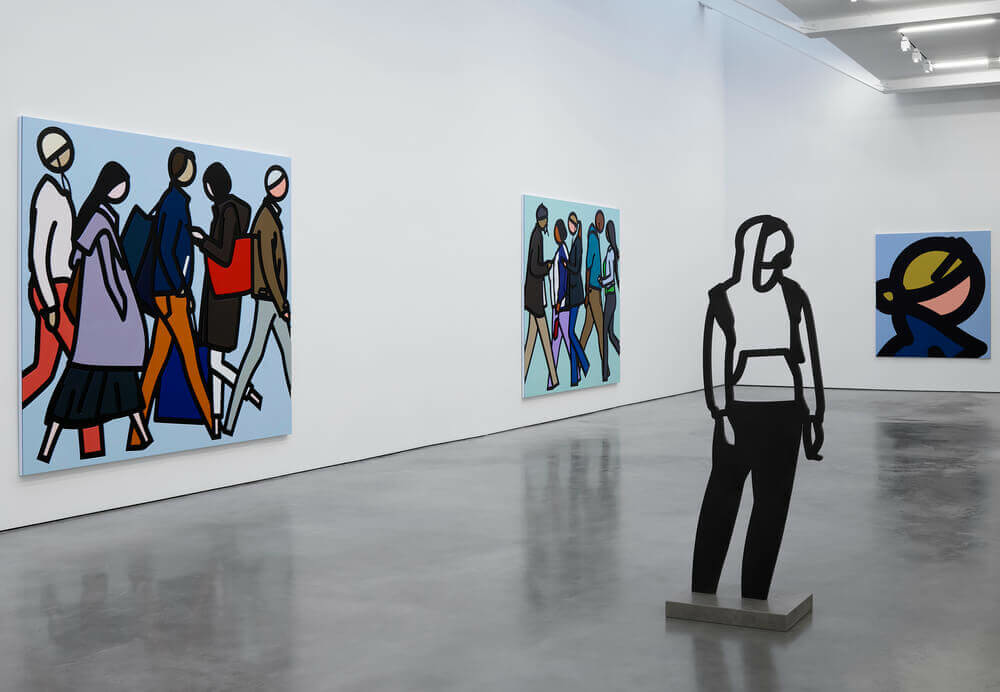 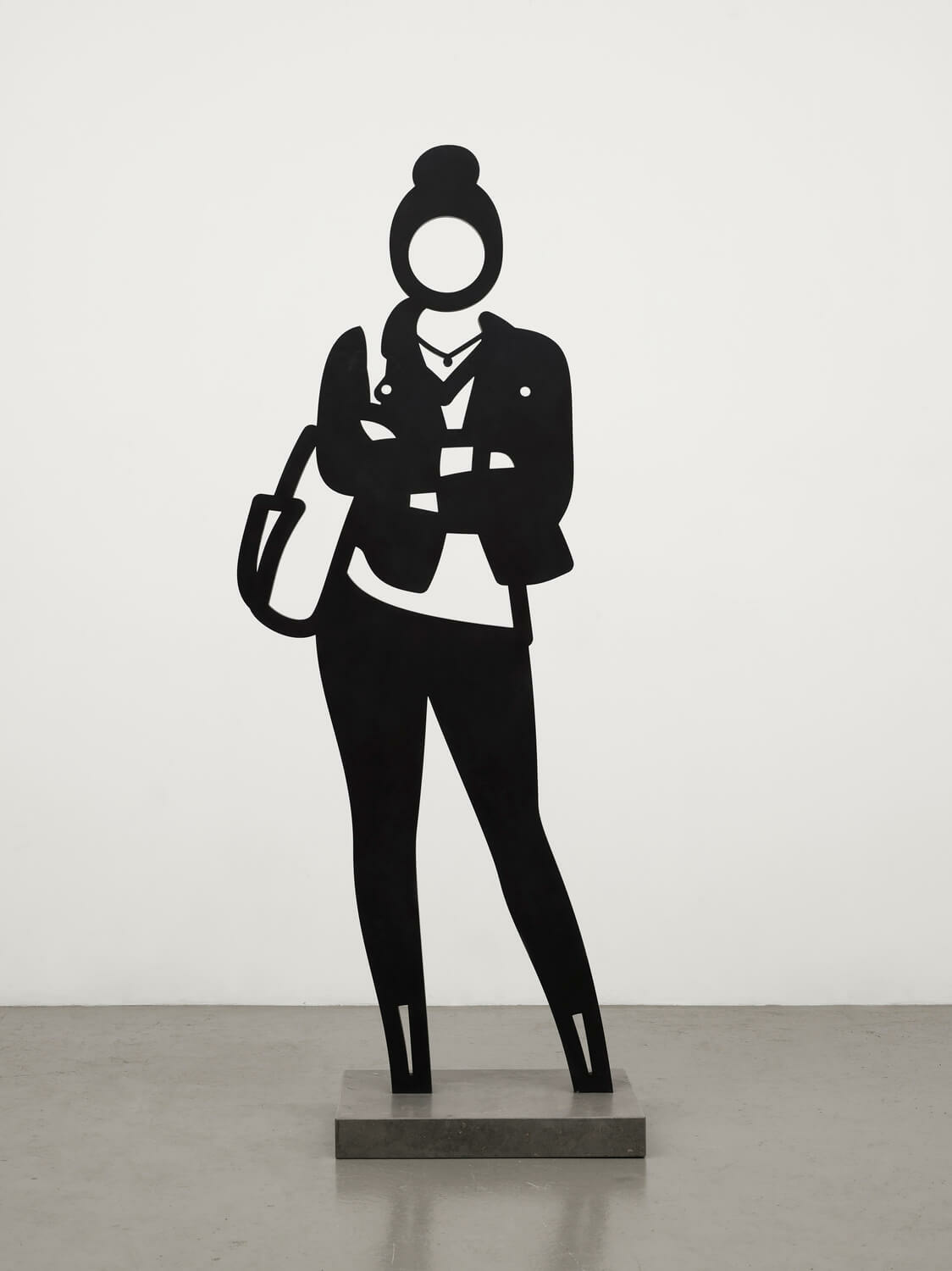 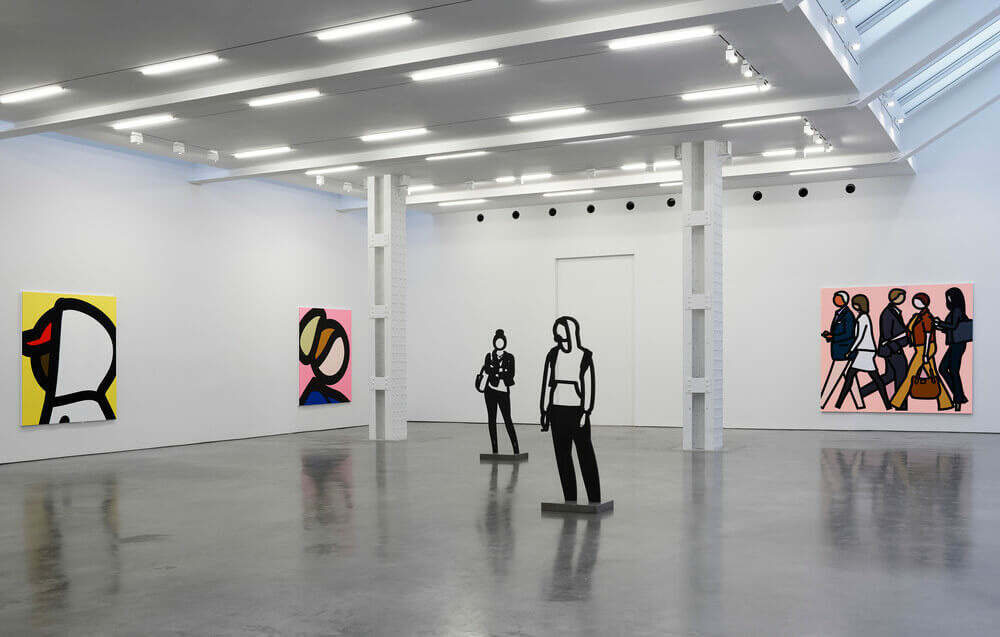 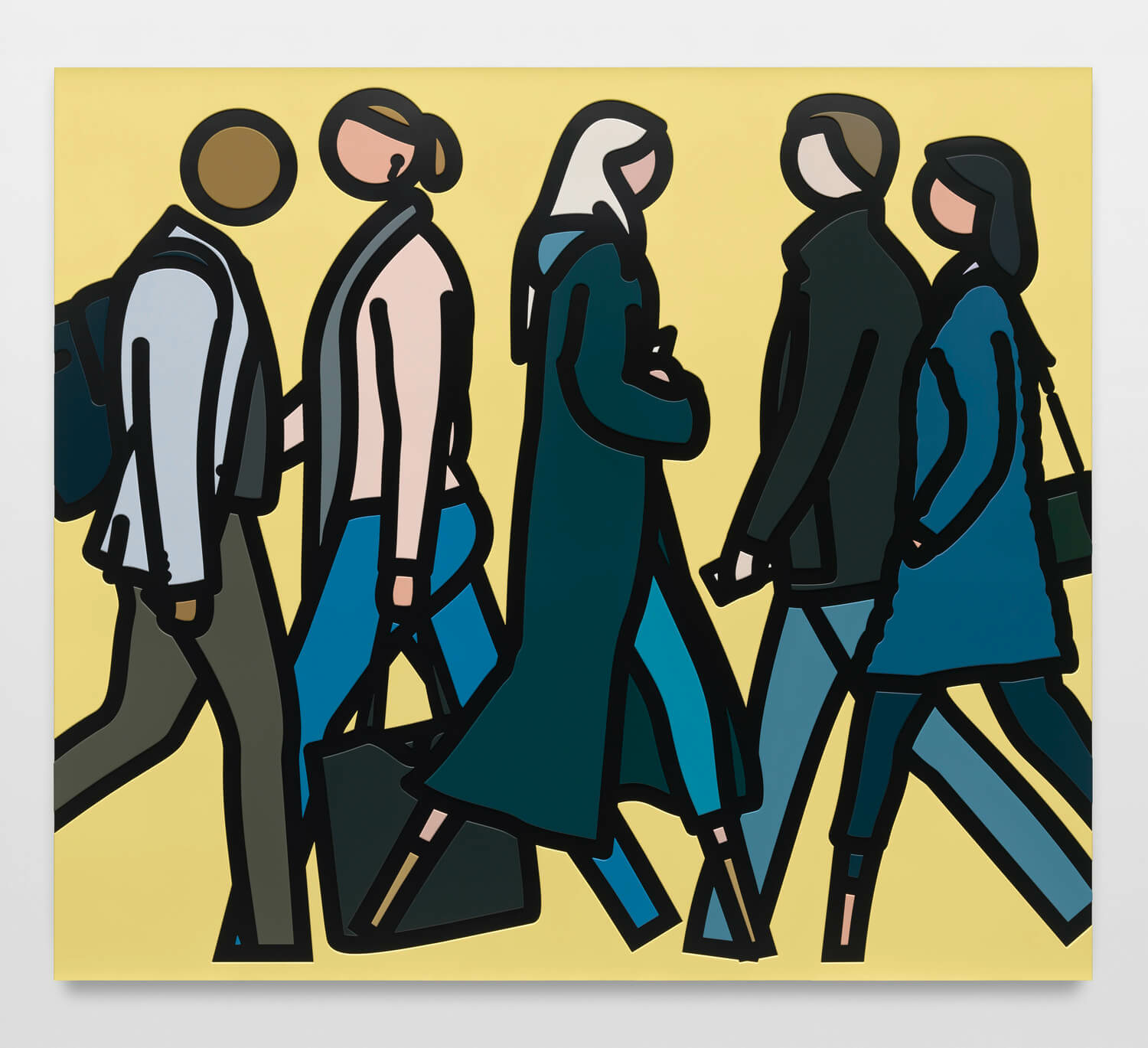 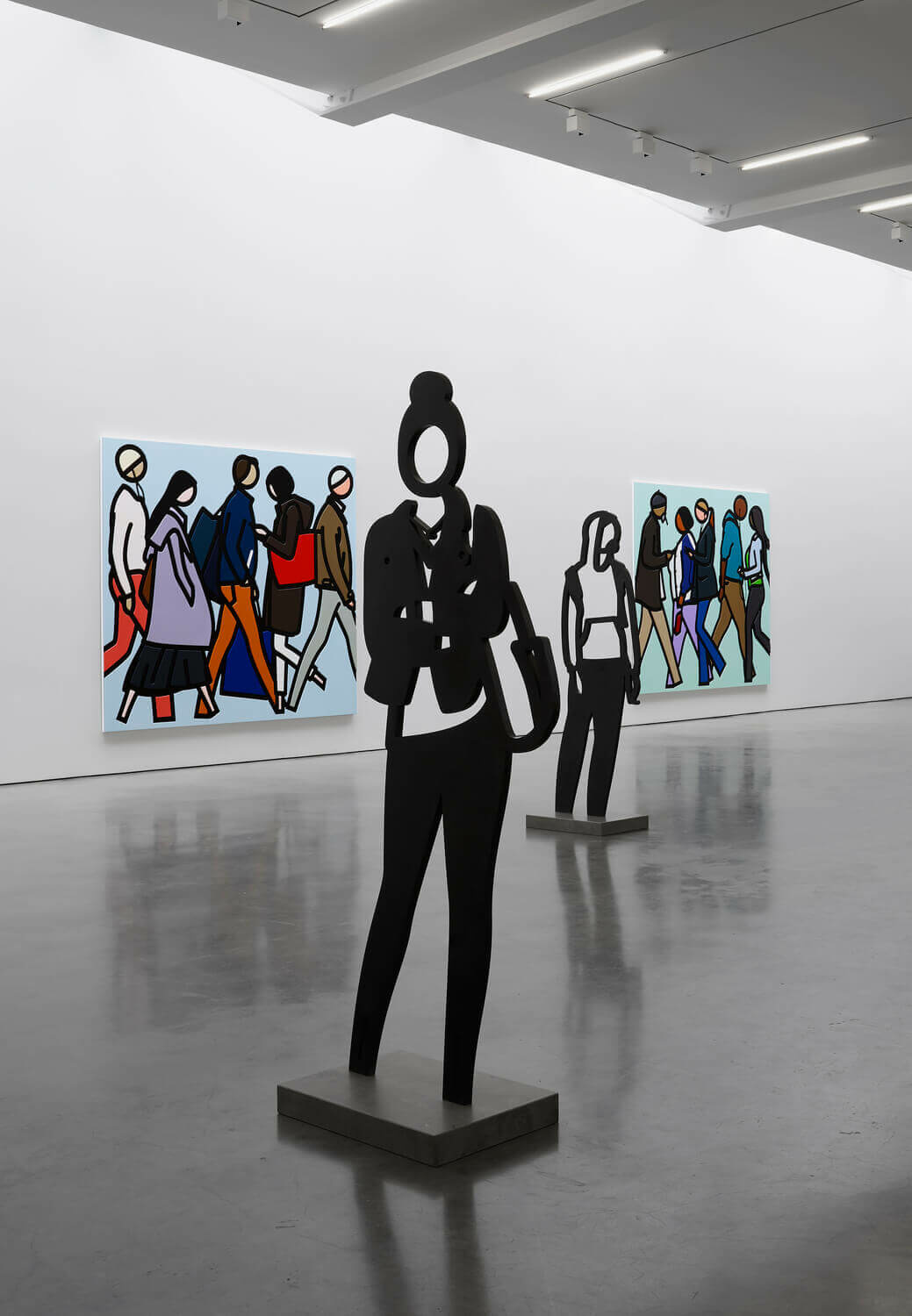 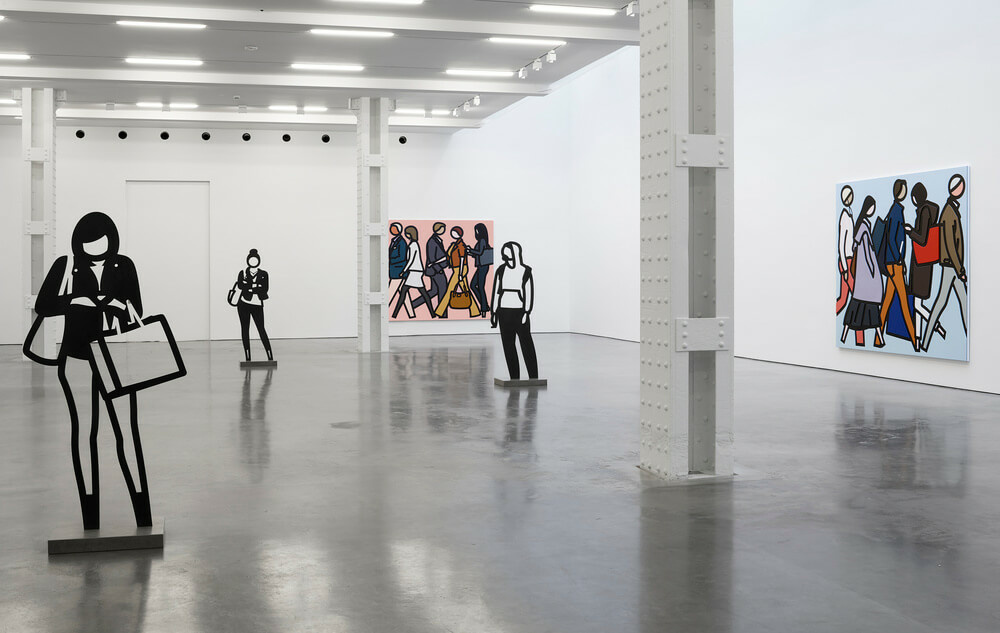 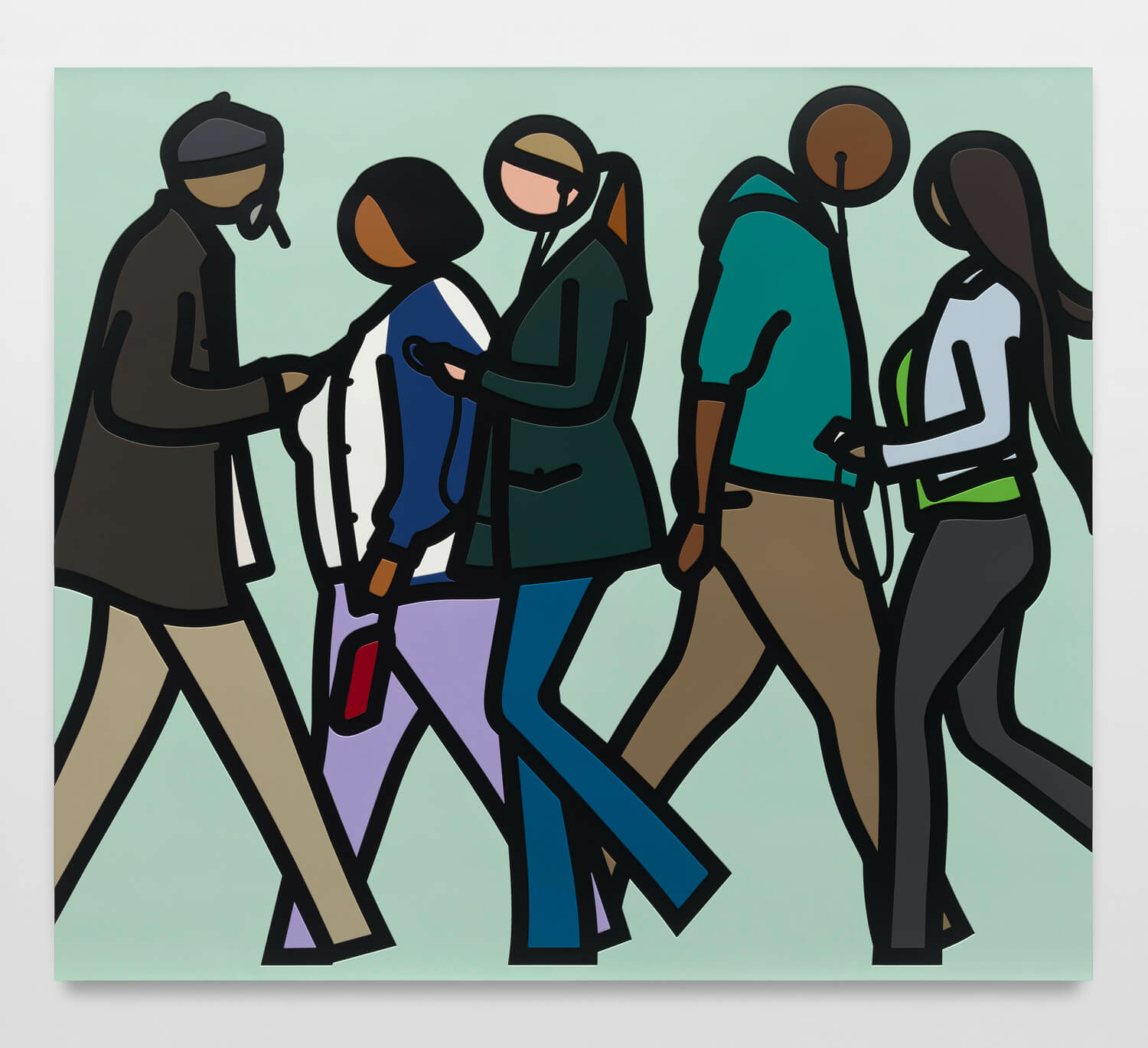 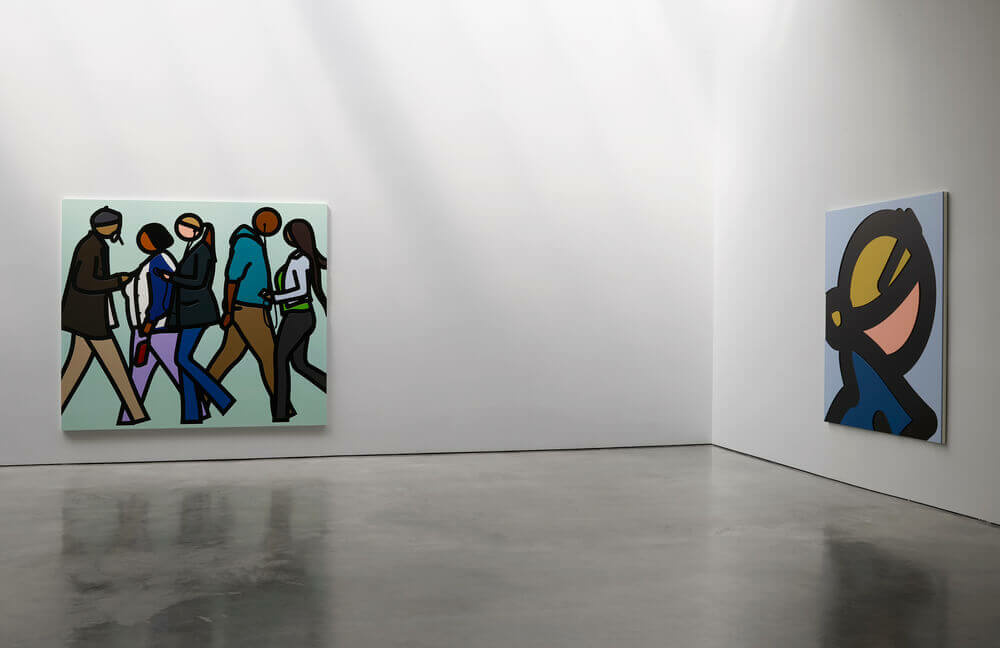 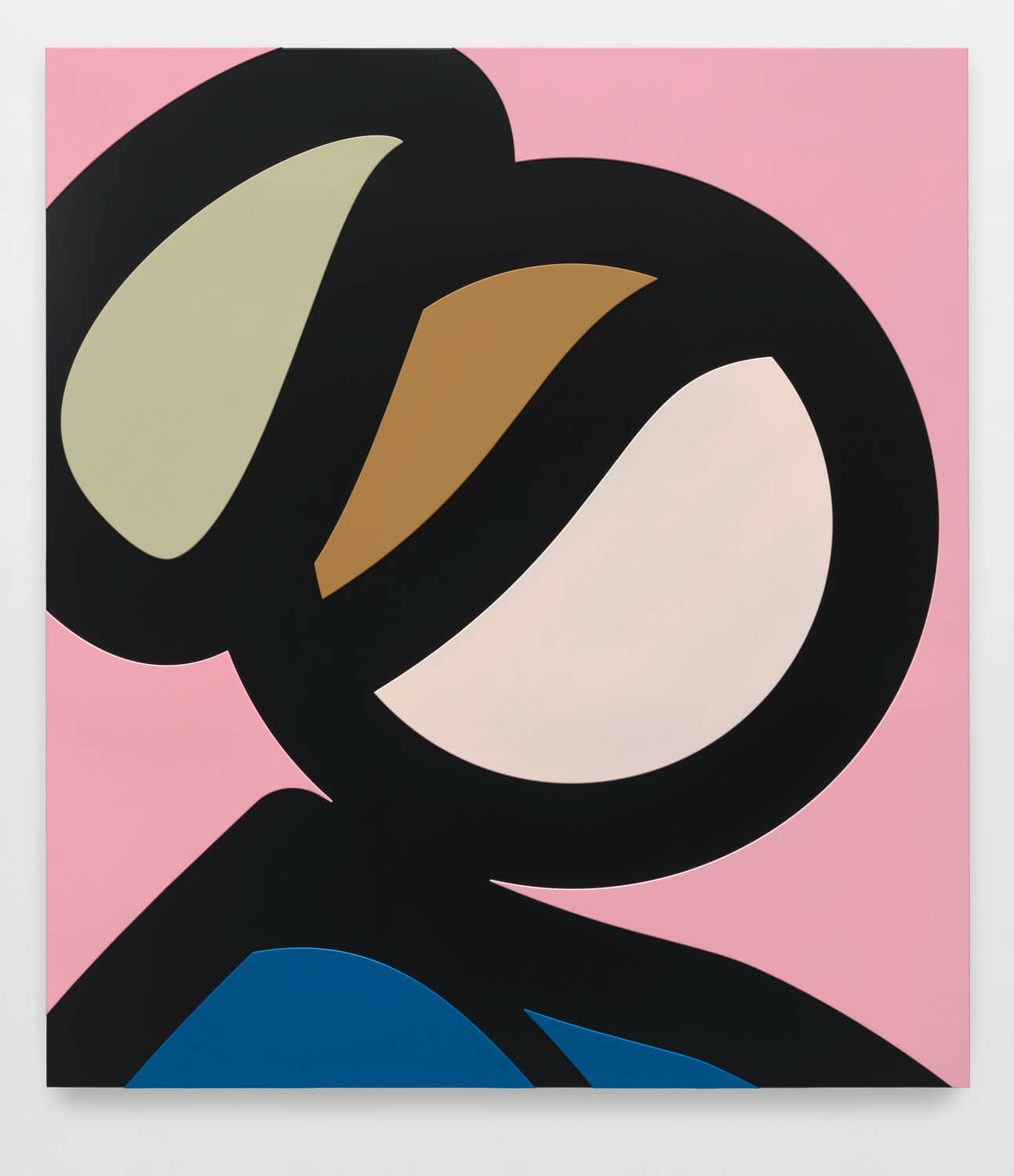 For Julian Opie’s first solo gallery exhibition in New York City, Lisson Gallery presents a new body of work focused on the artist’s portraits, presenting both individual heads and full-length groups. As Opie’s first presentation in Manhattan since his major Public Art Fund commission in City Hall Park in 2004, this presentation captures the people and daily routines that make up life in communities around New York City.

Over the years Opie has quietly observed the homogenisation of the world in cities and the people around him – from friends to strangers on the street – to produce portraits of individuals and society. Whether recreating a skyscraper, a serene landscape on the Cornish coast, or a selection of runners in a city park, Opie constructs an environment, a space that echoes the colours and shapes he observes. Fascinated by the act of picturing, and how that influences our ability to navigate and interact with the world, the artist’s portraits have become ubiquitous in locations across the globe.

The exhibition will include four individual portraits, all in profile, composed of auto paint on aluminium: Pony Tail., Hoodie., Diamond earring. and Dark Glasses. (all 2019). Despite the simplicity of the portraits, Opie’s process involves building up rather than reducing, beginning with one aluminium layer and adding onto the surface to shape the form, resulting in a three-dimensional, semi-sculptural object. Each figure, oscillating between figuration and abstraction, is embodied through one singular characteristic, be it their hairstyle, jewellery or clothing. A realist painter, Opie captures not the accuracy of a photograph, but the realism of a memory, a glance, or a feeling; each character’s identity determined by the artist’s intangible experience or memory of the encounter.

Along the opposite wall are four group portraits, each featuring five individuals walking: Walking in New York 1., 2., 3., and 4. (all 2019). This body of work, based on photographs of specific scenes in neighbourhoods across New York, presents a snapshot of life in the city. Surrounded by abstracted figures, these portraits are at once distinctly individual and yet universal, recalling the anonymity omnipresent in modern city life. Opie echoes the arrangement and rhythmic movement of Greek vases and stone-carved Roman friezes, bringing these traditions into the modern-day – just as an ancient frieze mural would depict the identity of a warrior through their sword or valiant pose, Opie characterises each individual through a specific stance, adornment, attire or attitude.

The exhibition also features three life-size, patinated bronze sculptures standing in the gallery amongst the paintings. In each figure represented in Leather Jacket., Hoodie. and Two Bags. (all 2019), the viewer instinctively builds a narrative around the character, recalling typical scenes from metropolitan life, from a man smoking casually, perhaps at a bus stop or waiting for a friend, to a woman travelling home with shopping bags, aimlessly checking her phone. Familiar yet unnervingly distant, these figures highlight questions about our own reality – as individuals and as a society – and prompt us to ask, what object or pose would we choose to characterise our existence?