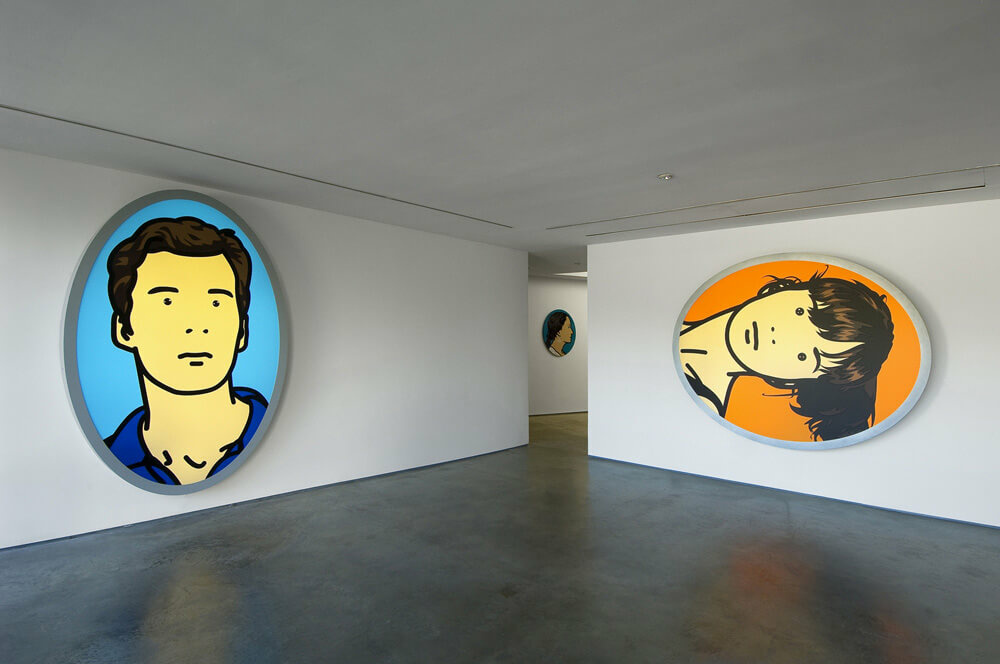 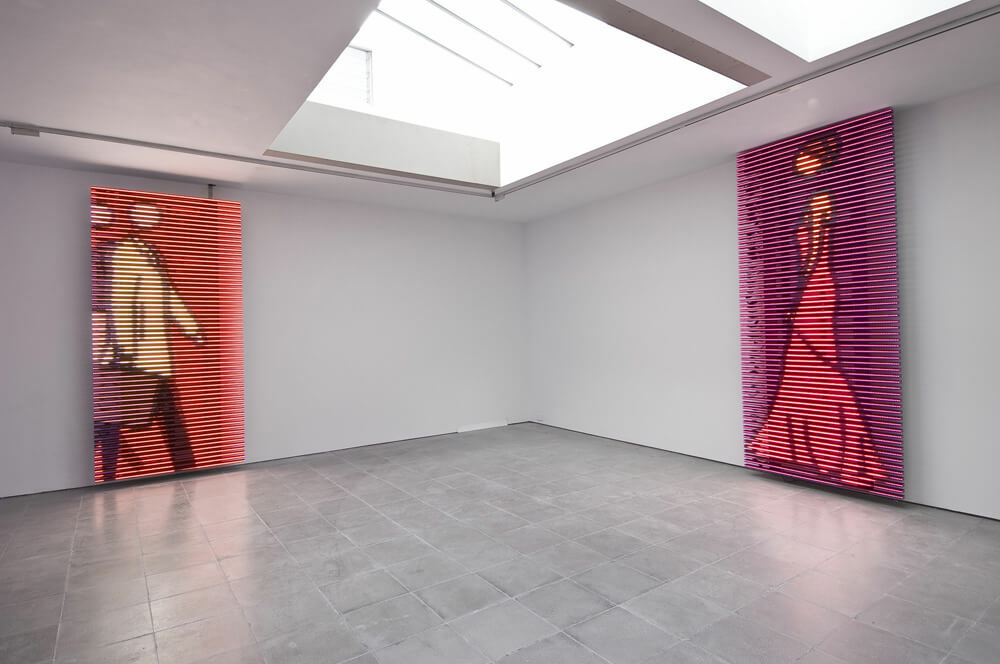 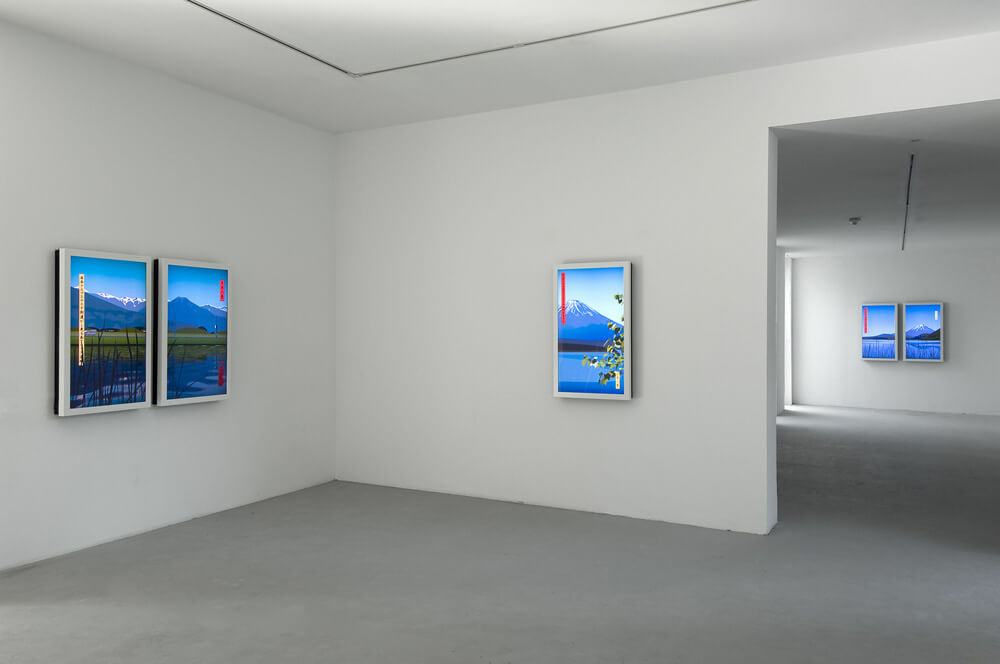 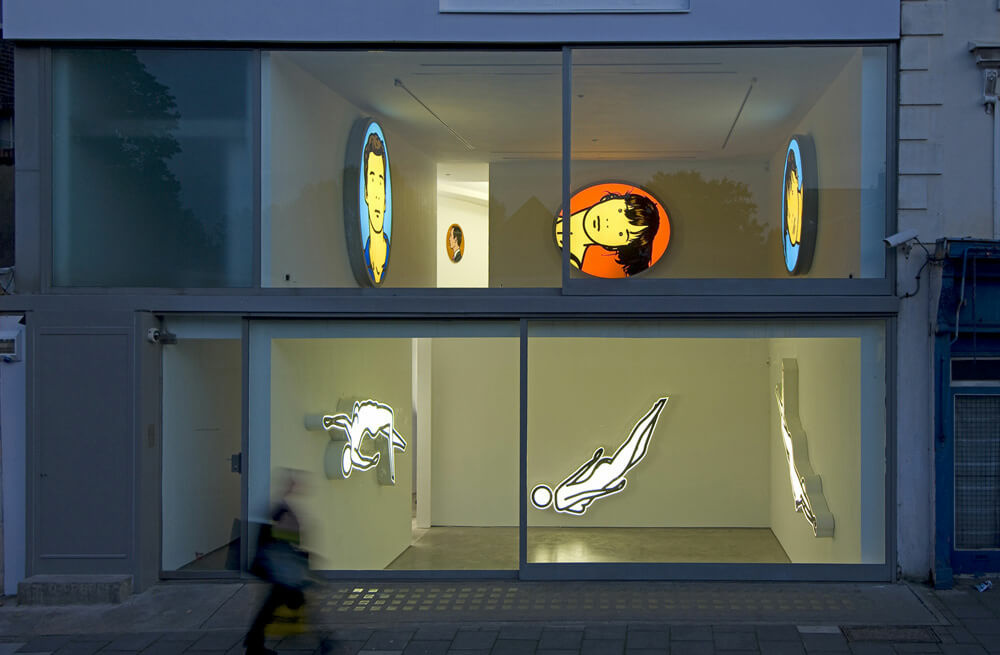 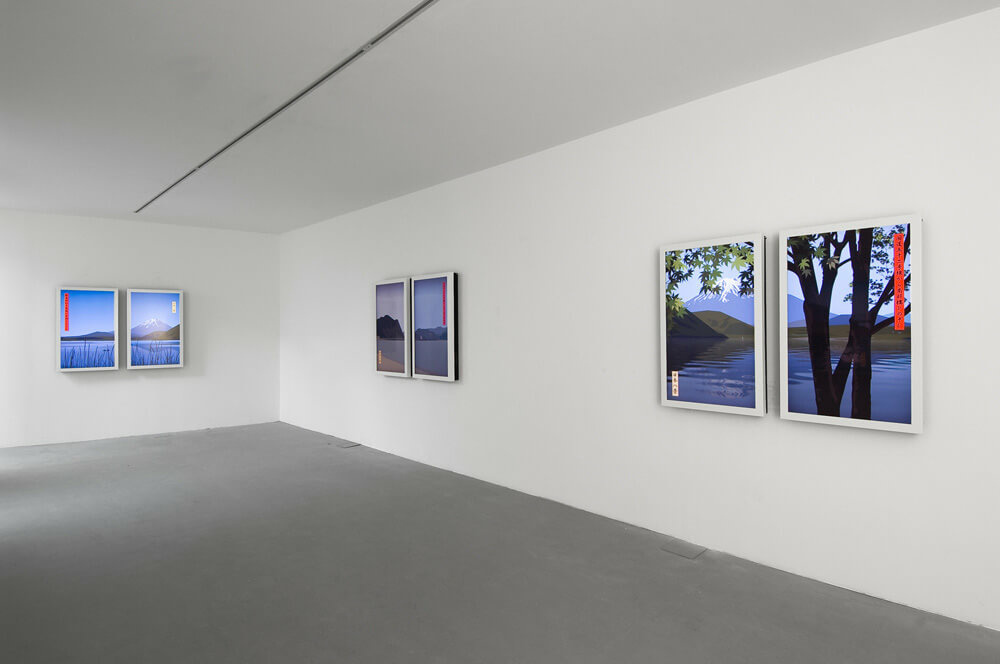 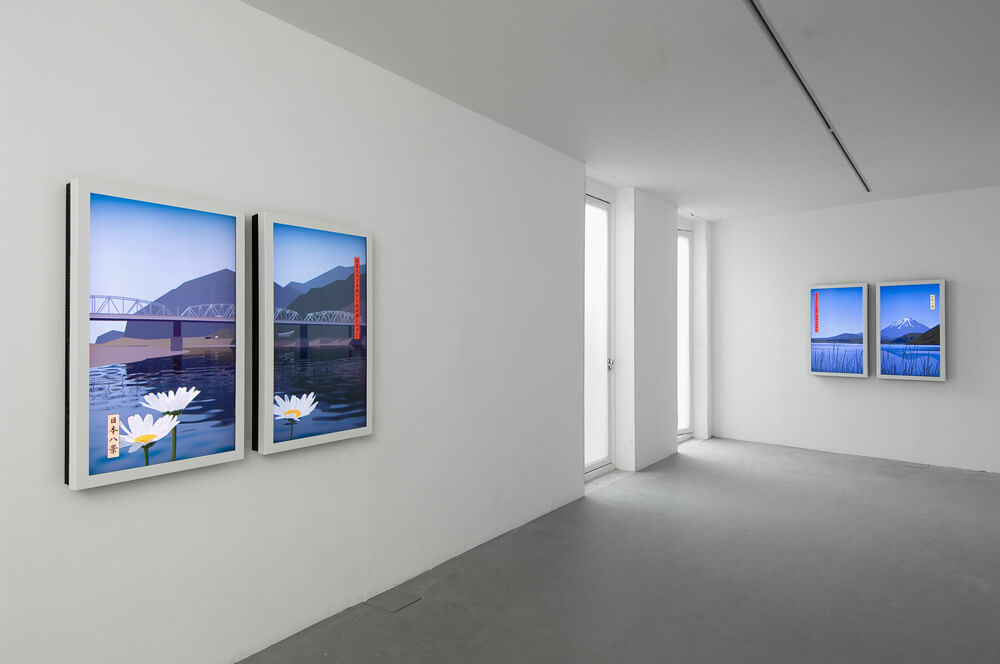 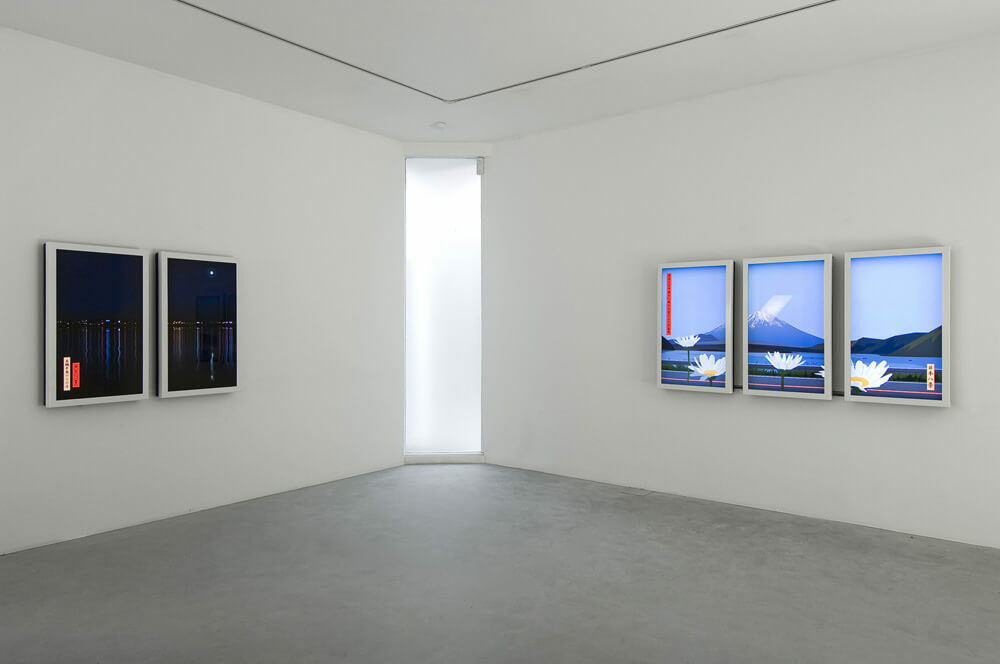 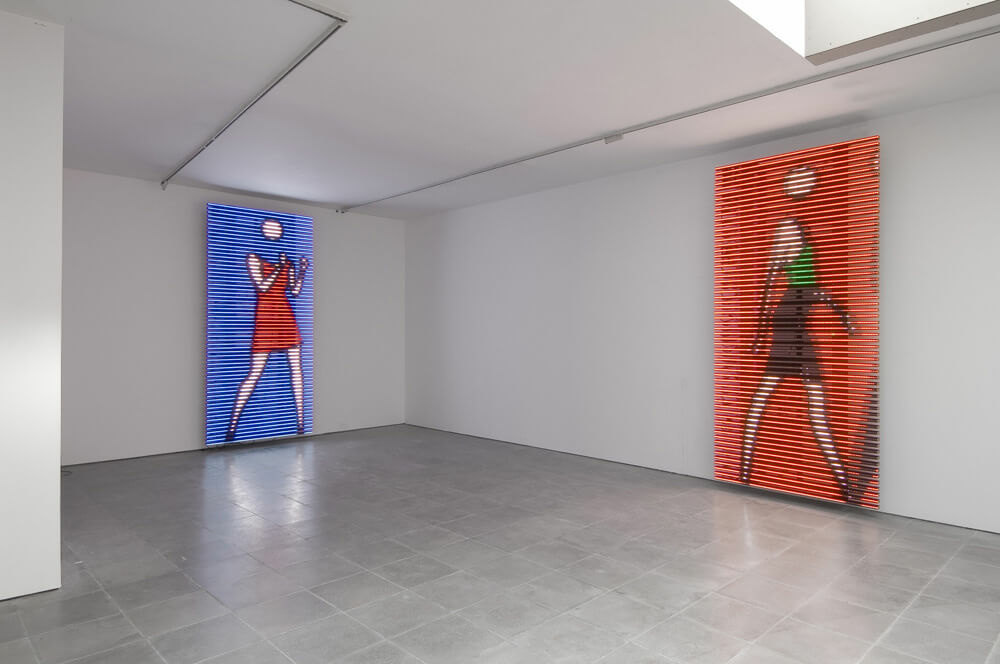 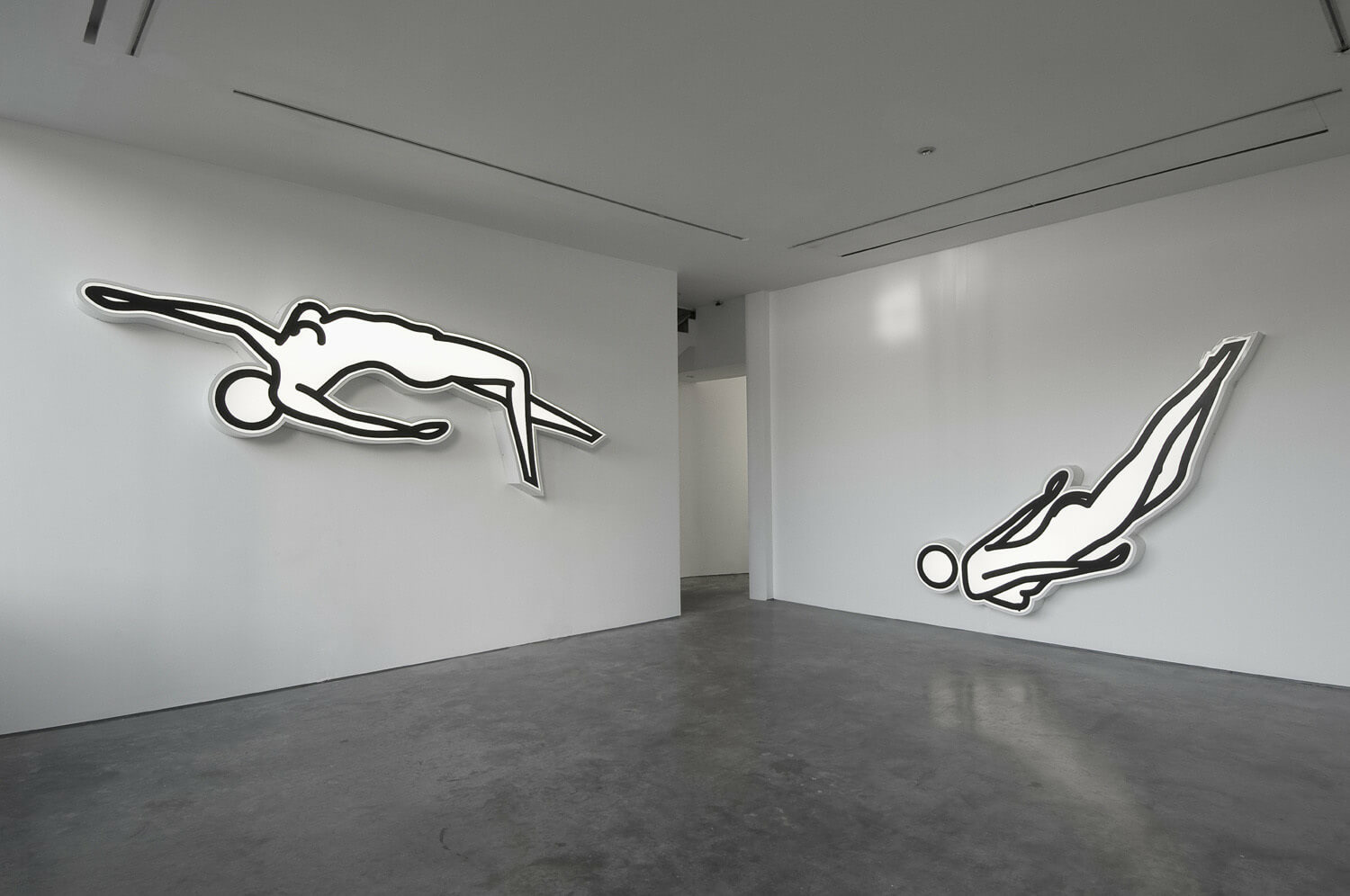 Lisson Gallery is delighted to announce an exhibition of recent works by Julian Opie. This extensive show will articulate Opie’s interest in the traditional genres of landscape painting and portraiture, and his engagement with art history. Some forty works will range in medium from painting and sculpture to liquid crystal display (LCD) screens and light emitting diodes (LEDs).

Julian Opie draws the contemporary world, constructing his refined, concise visual language, through which images of people, figures and landscapes are conjured. He distils his images from the wide but everyday world we encounter, rendering them in his universally recognisable style. Simple signs and pictograms are expanded to evoke real people and places. Opie is interested in reality, not a photographic record of a past moment, but a full reality of reference, memory, sensory experience and representation.

Opie’s portraits explore the tension between general and specific reality, transforming individual subjects into universal signs, interrogating the genre of portraiture itself. His new portrait works, such as Maria Teresa with red shawl (2008) and Antonia with evening dress (2008), are incredibly beautiful and rich in detail, and echo the repertoire of postures and poise found in seventeenth and eighteenth century British and Dutch portraits by Sir Anthony Van Dyck, Sir Joshua Reynolds and Peter Lely.

Opie’s interest in the human figure and portraiture has been further extended into moving animations. The animated figures walk, smile or dance with the fluidity of movement of real humans. Ann dancing (2007) is a huge brightly illuminated LED depicting a young woman’s stylish swaying dance motions. Her movements are hypnotic, creating in the viewer a heightened sense of their own physical presence.

Also exhibited will be Opie’s Eight Views of Japan (2007), a series of animations on double and triple LCD screens of Japanese landscapes based on a trip taken by the artist around Mount Fuji in Japan. These works closely reference Japanese art history, particularly ‘pictures of the floating world’ - paintings and prints of the Ukiyo-e school. Opie has been much influenced by the graphic, pared down style of Utagawa Hiroshige and Kitagawa Utamaro, in whose work a seeming simplicity is attained from underlying complexity. Opie’s work, such as View of the mountains from the Nihon Alps Salada Road (2007), is influenced by Hiroshige’s spare, ideal compositions, which often play with perspective and cropping techniques to juxtapose a foreground motif with the background to dramatic effect.

Julian Opie lives and works in London. He studied at Goldsmith’s College of Art, graduating in 1982 and had his first solo exhibition at Lisson Gallery in 1983.

Lisson Gallery is publishing a catalogue for their exhibition, in the style of a Japanese Manga comic. The catalogue will include full illustrations and accompanying text.

Other Publications and Projects

A new book of Julian Opie’s portraits from 2002 to 2008, published by MAK, Vienna, is now available, priced at 34 euros. The book includes essays by Sandy Nairne, Director of the National Portrait Gallery, London and Timothy Clark, Curator and Head of the Japanese section in the Department of Asia at the British Museum.

Concurrently with the exhibition at Lisson Gallery, Julian Opie will show a new series of prints ‘Shahnoza in Three Parts’ at Alan Cristea Gallery from 18th October – 15th November.

0n 13th October 2008, www.julianopieshop.com, will launch. This online store will offer a wide range of product designed by Julian Opie.