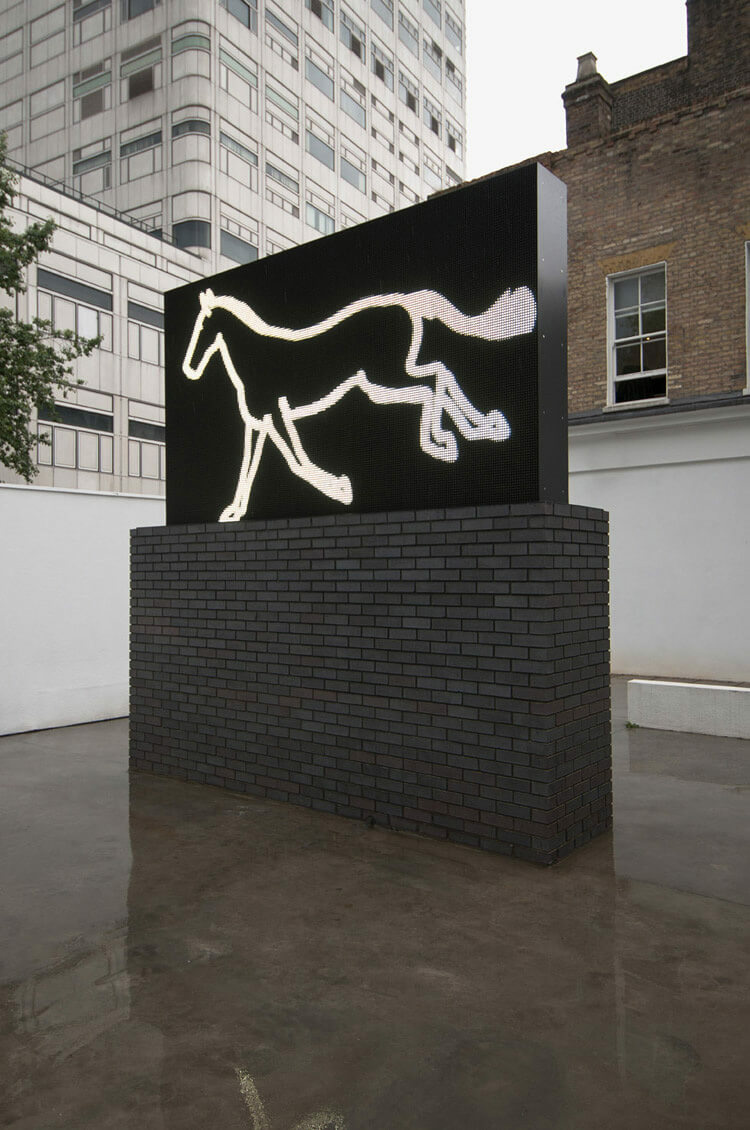 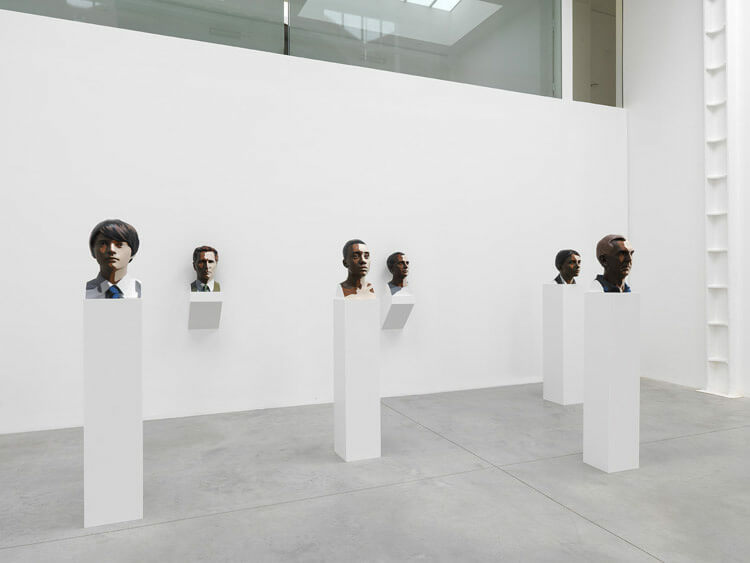 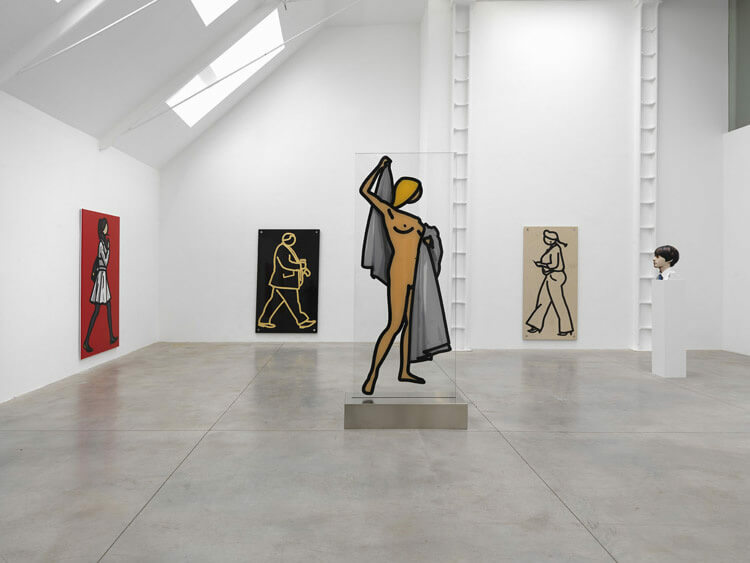 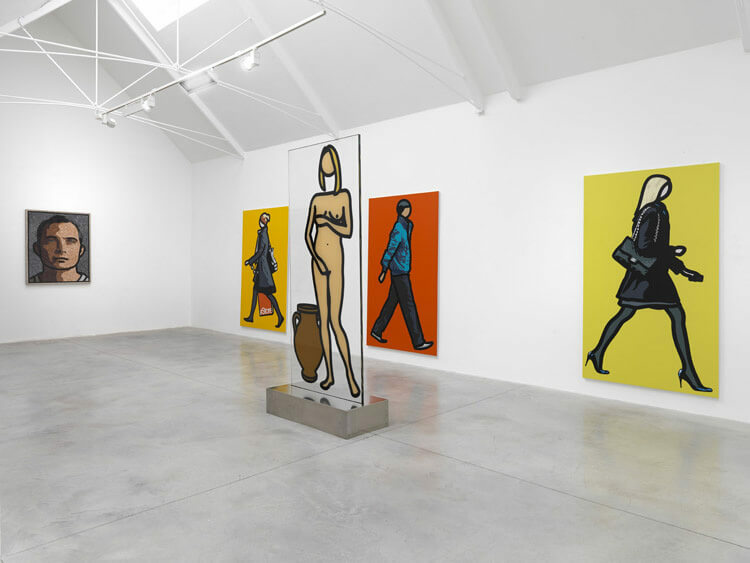 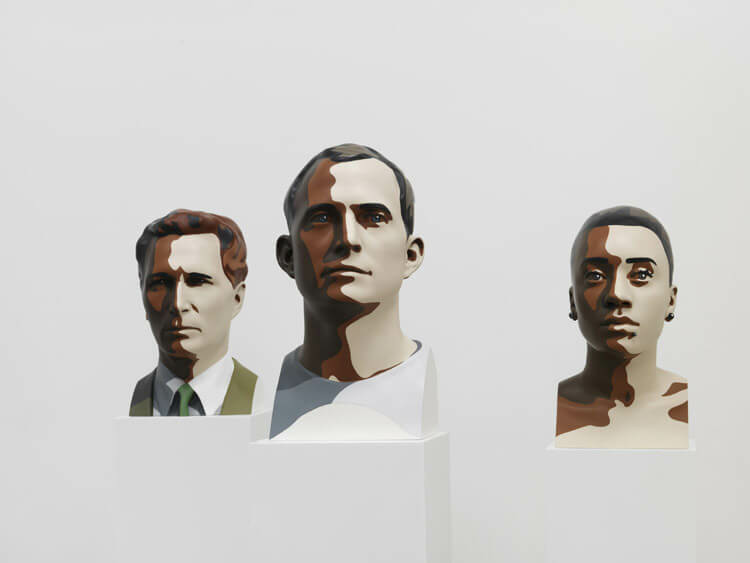 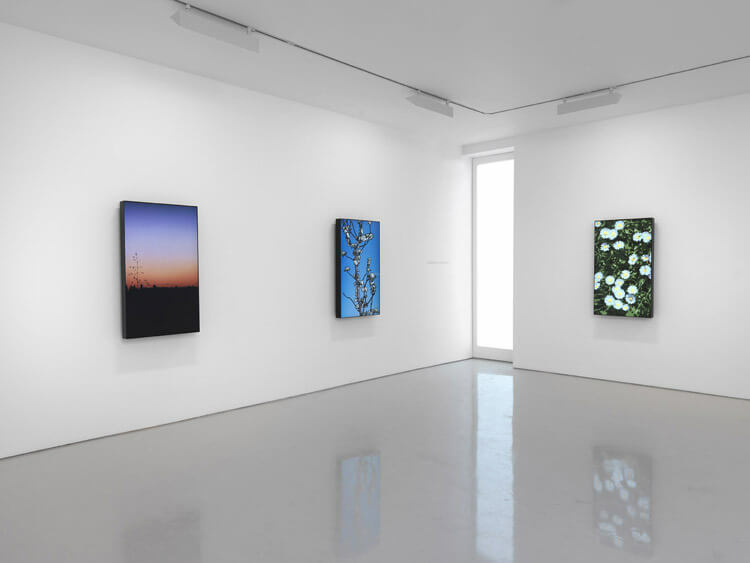 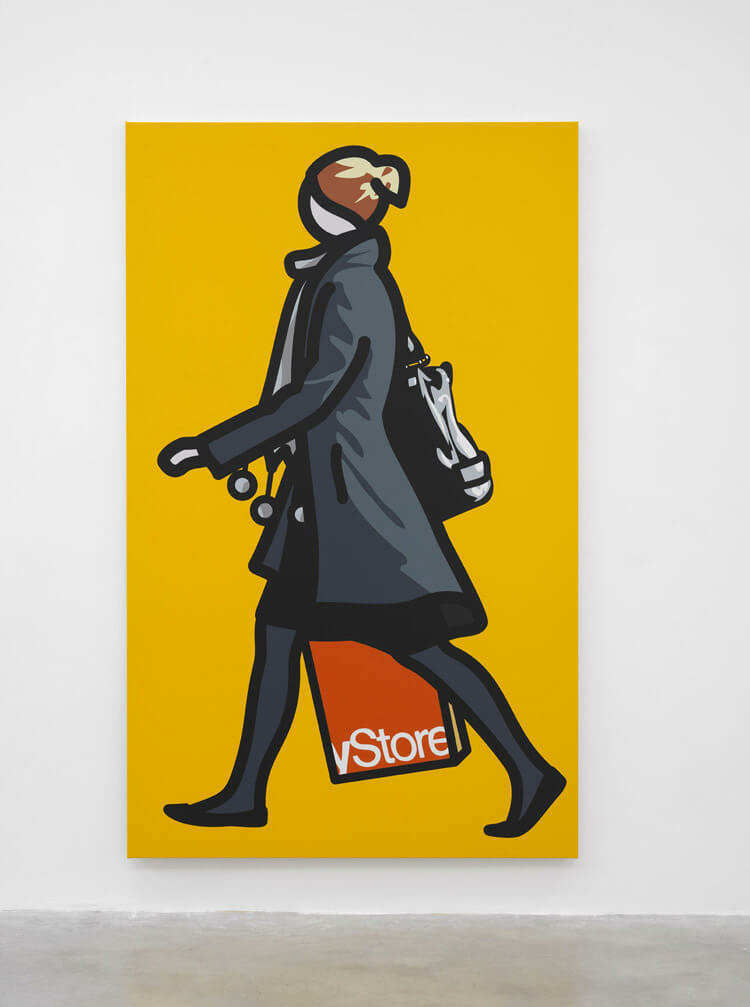 Woman with shopping bag and scarf, 2012,
Vinyl on wooden stretcher 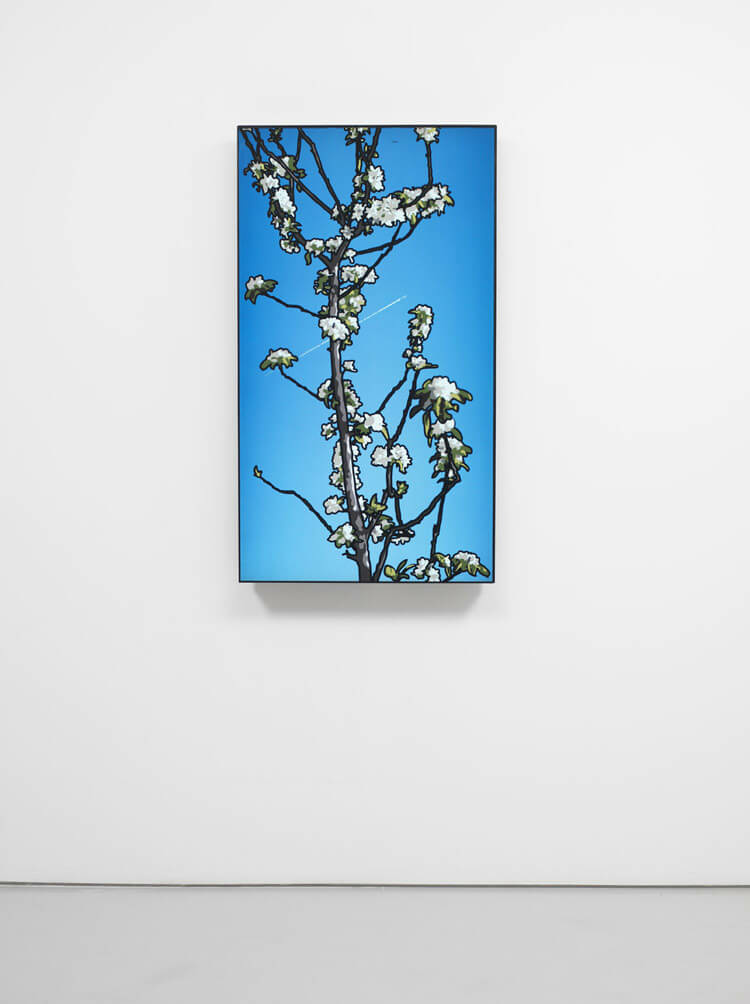 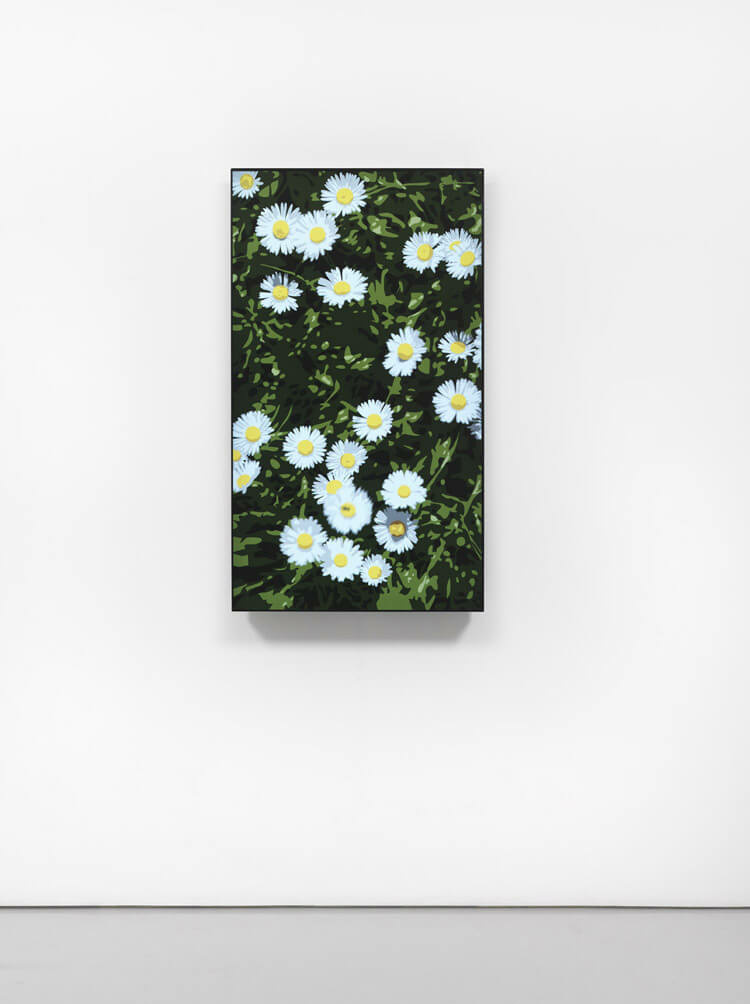 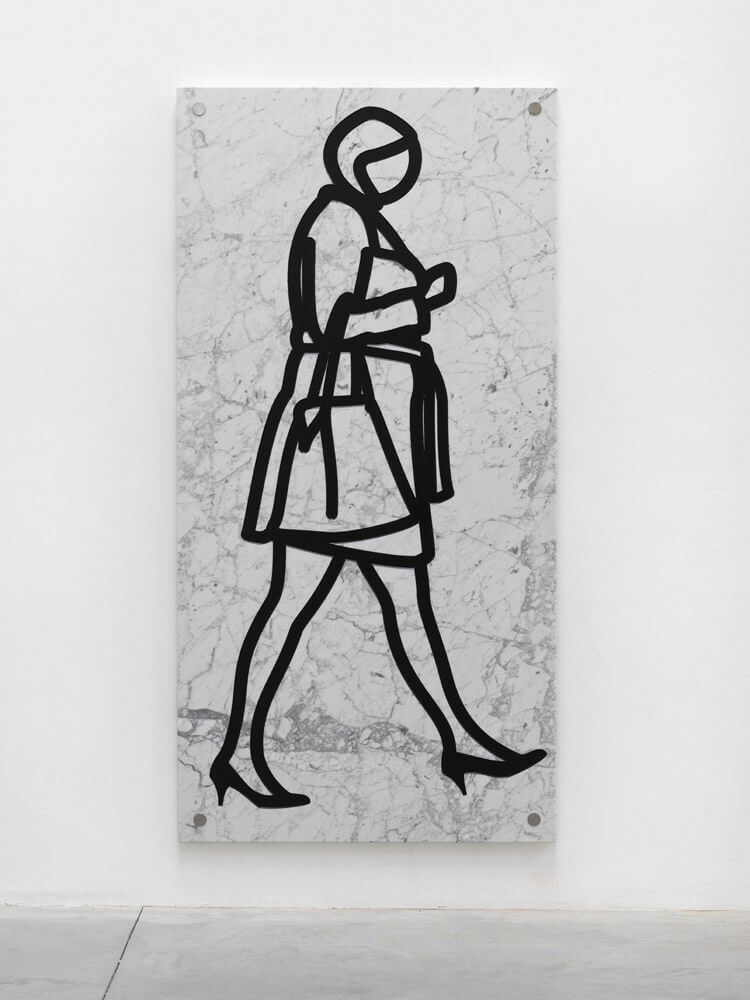 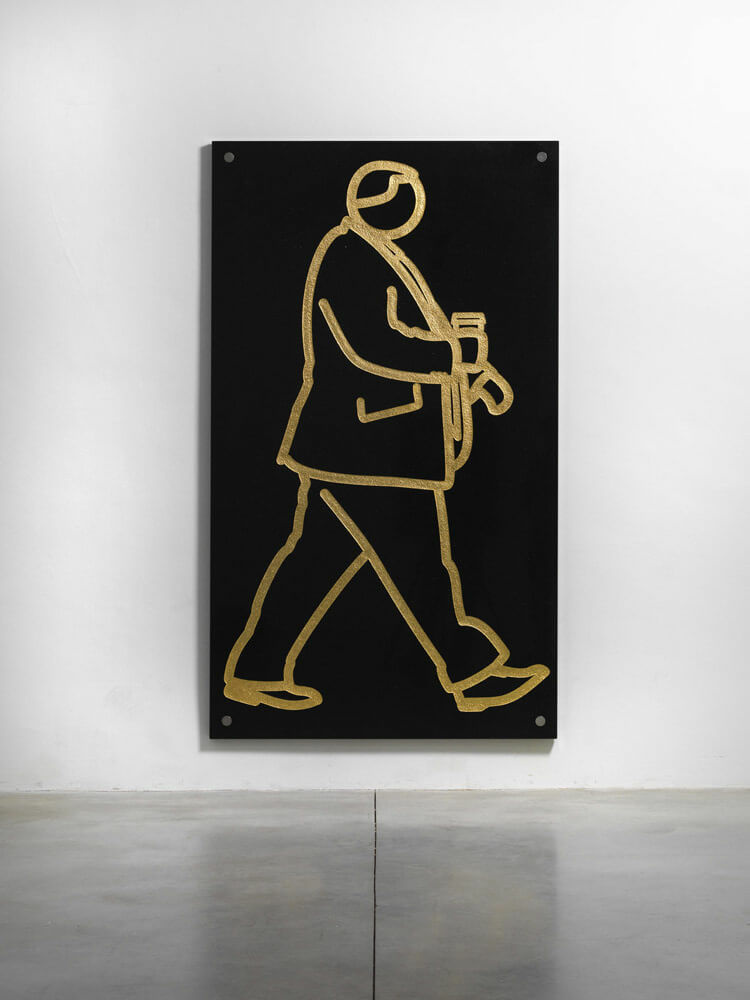 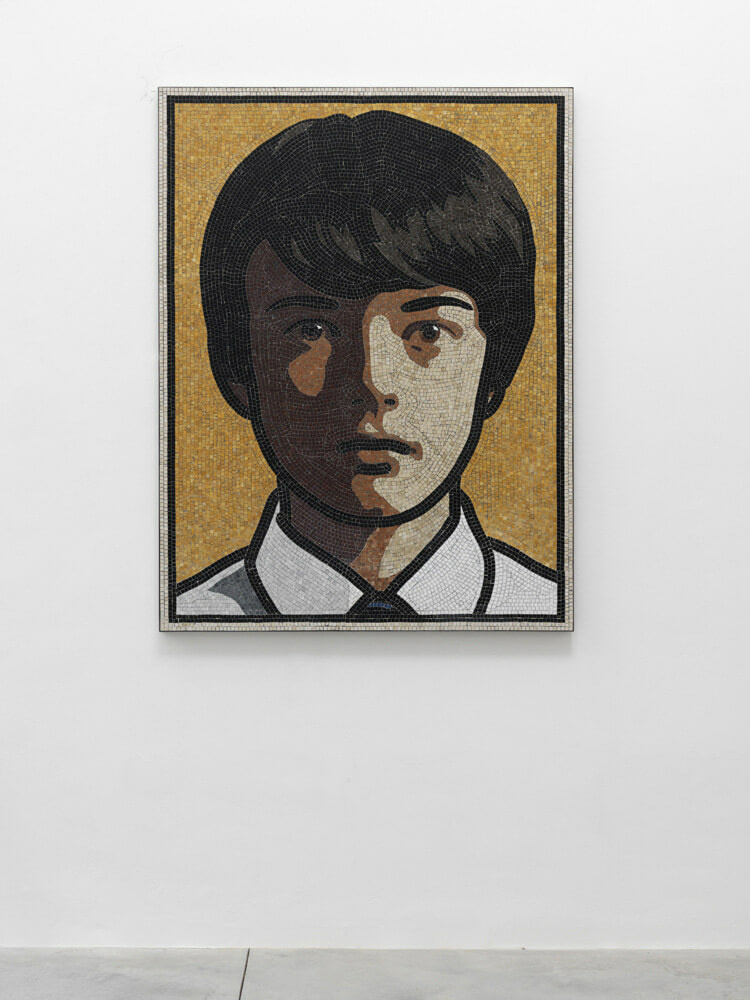 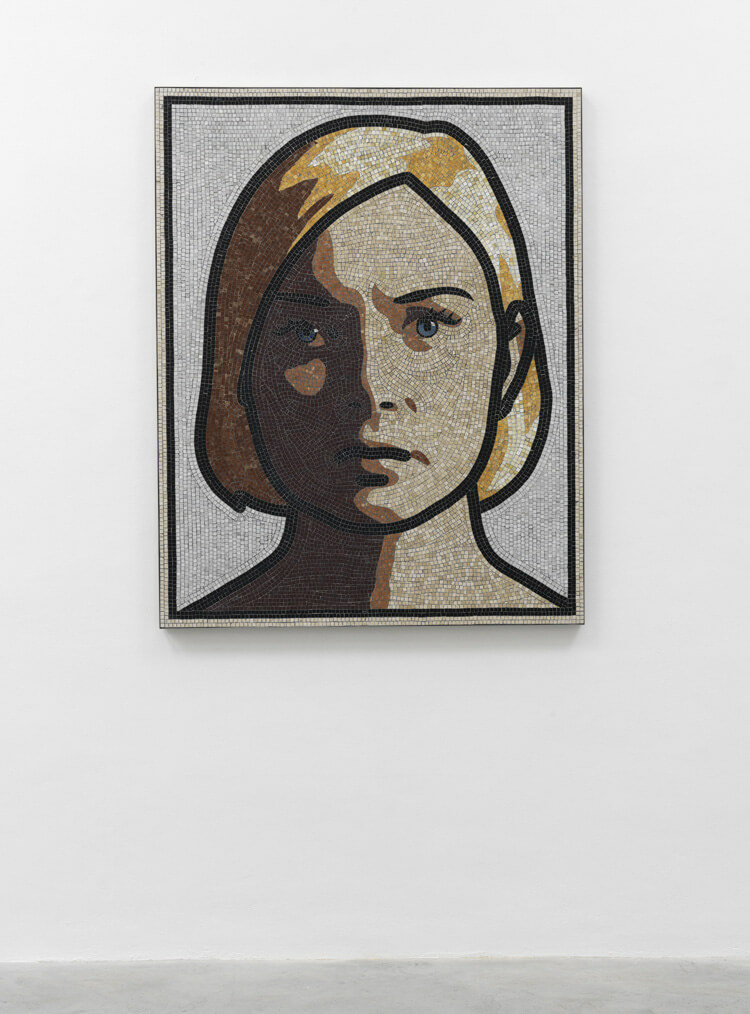 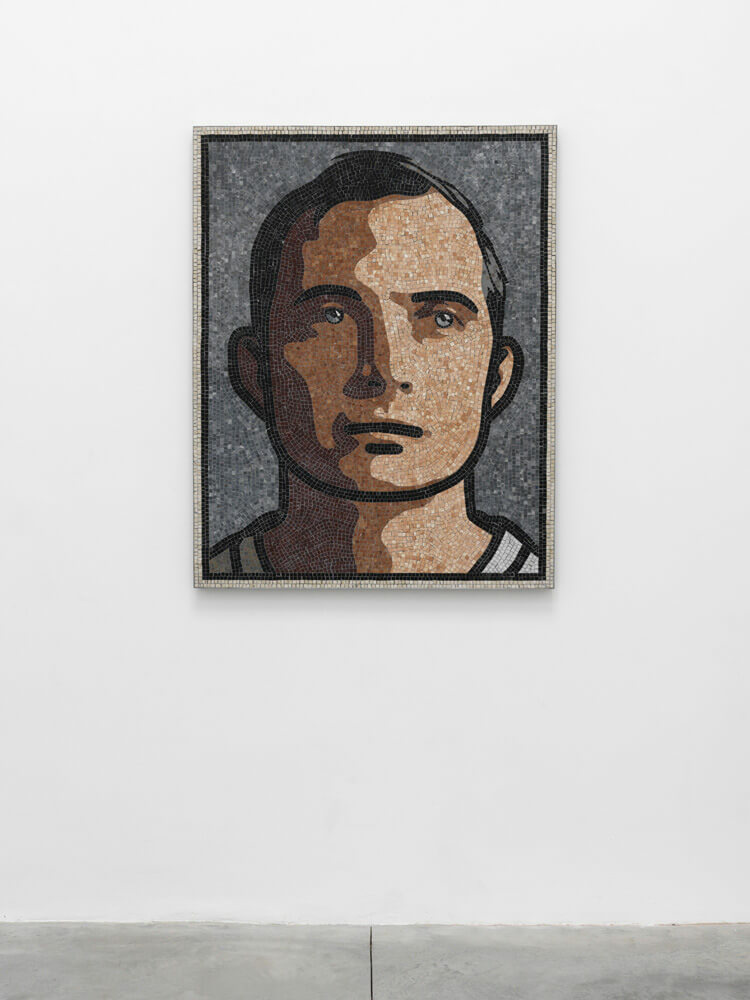 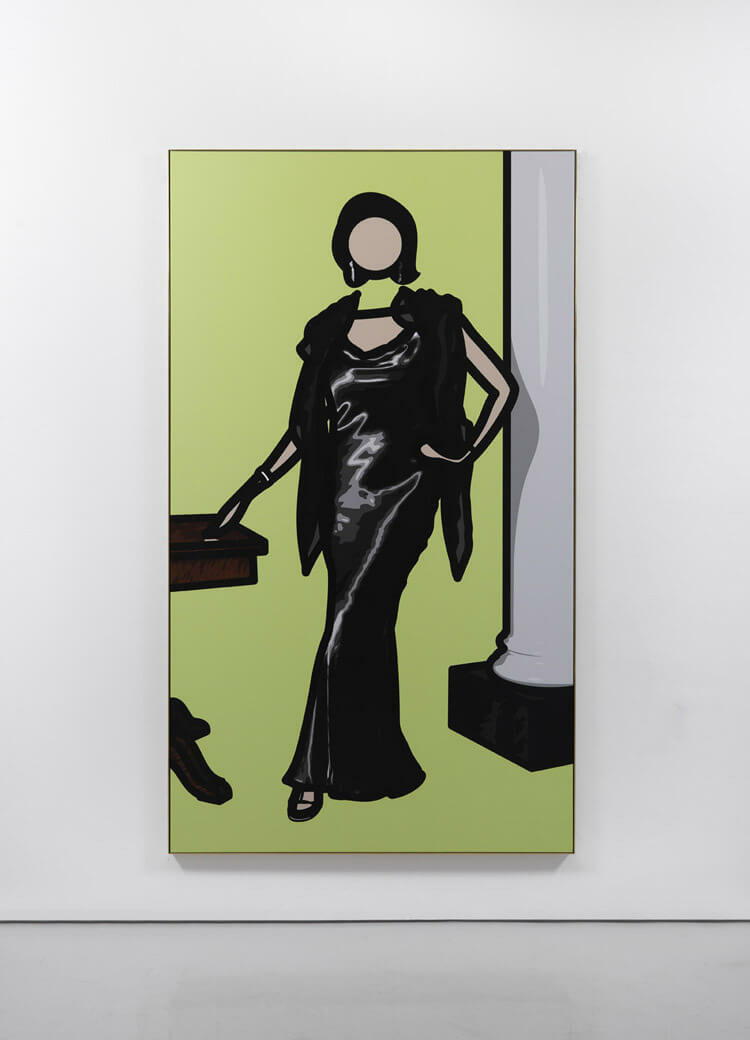 At home with Maria 1, 2011,
Inkjet on canvas with brass frame 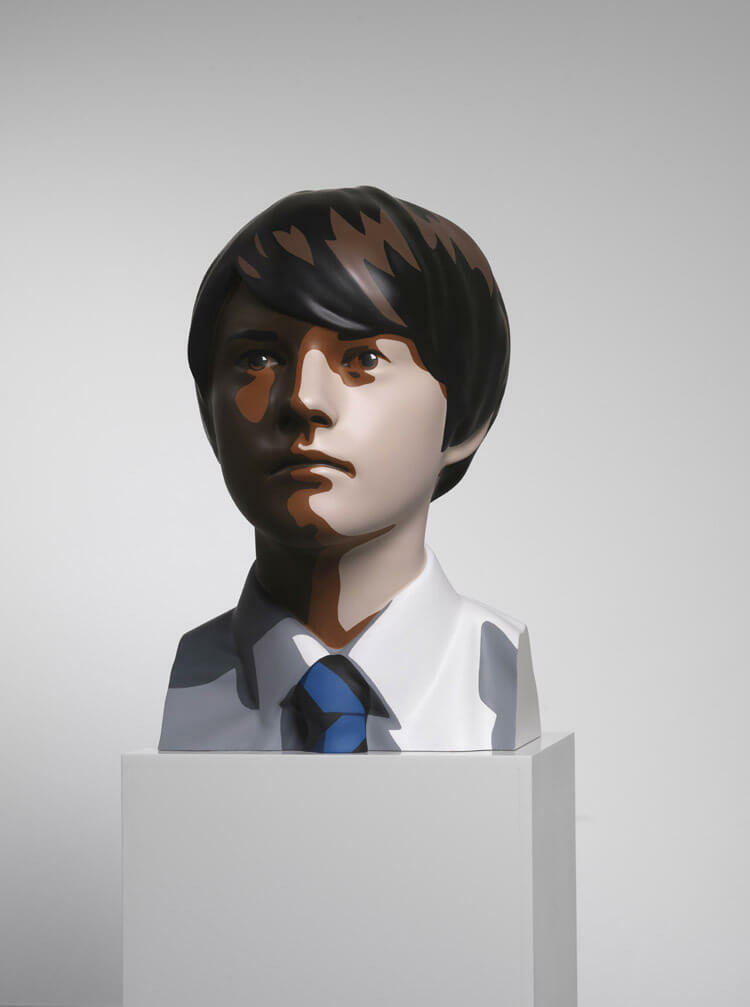 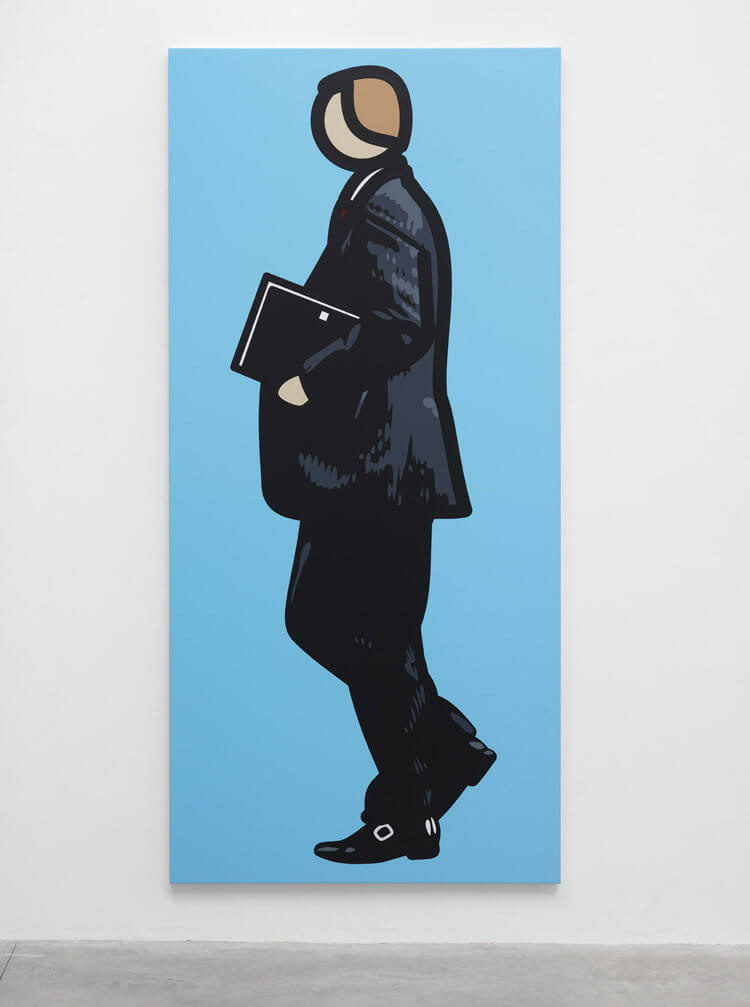 Man in pinstripe suit with laptop, 2012,
Vinyl on wooden stretcher 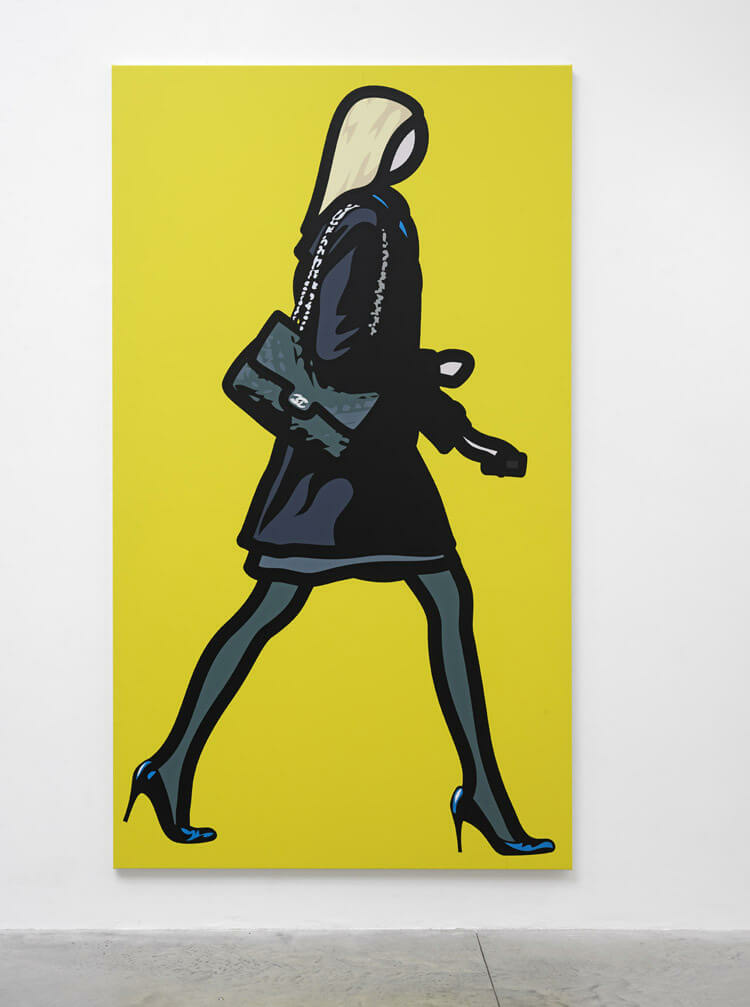 Woman in high heels with telephone, 2012,
Vinyl on wooden stretcher 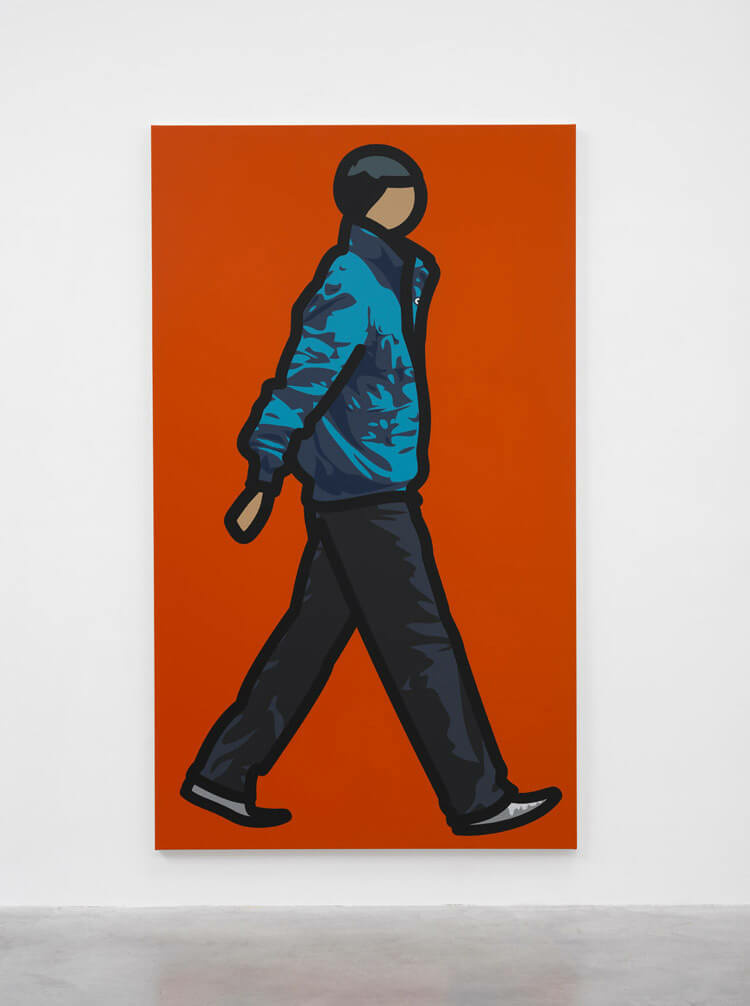 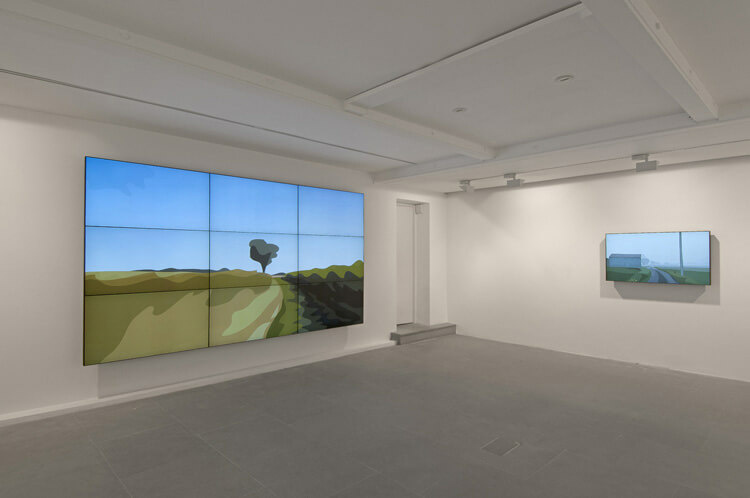 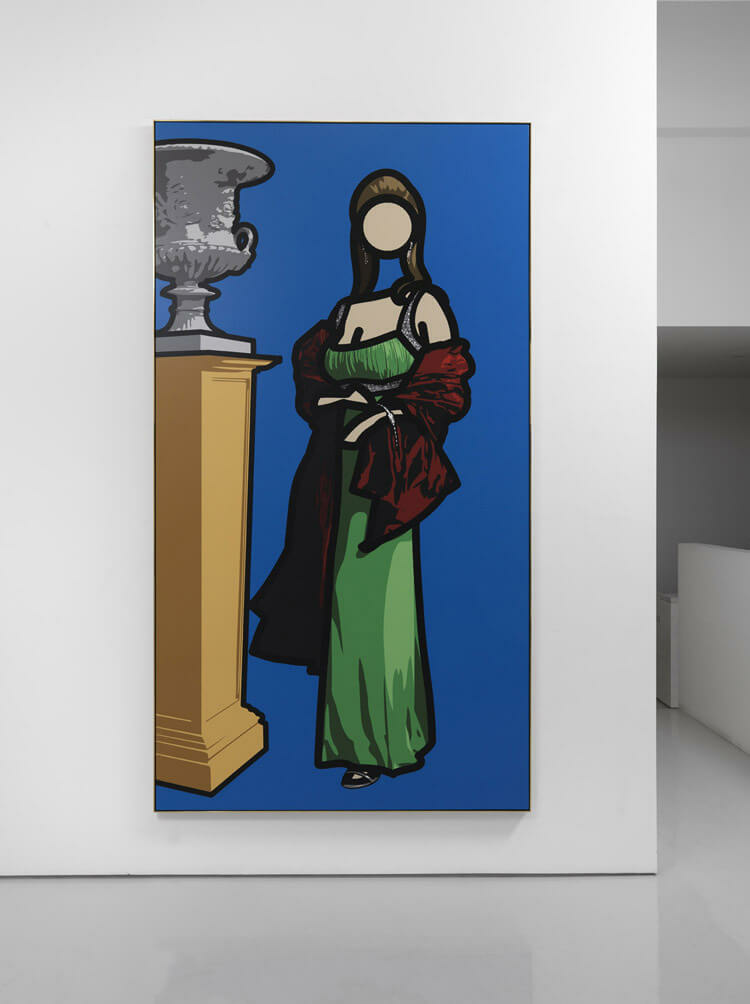 At church with Felicia, 2011,
Inkjet on canvas with brass frame 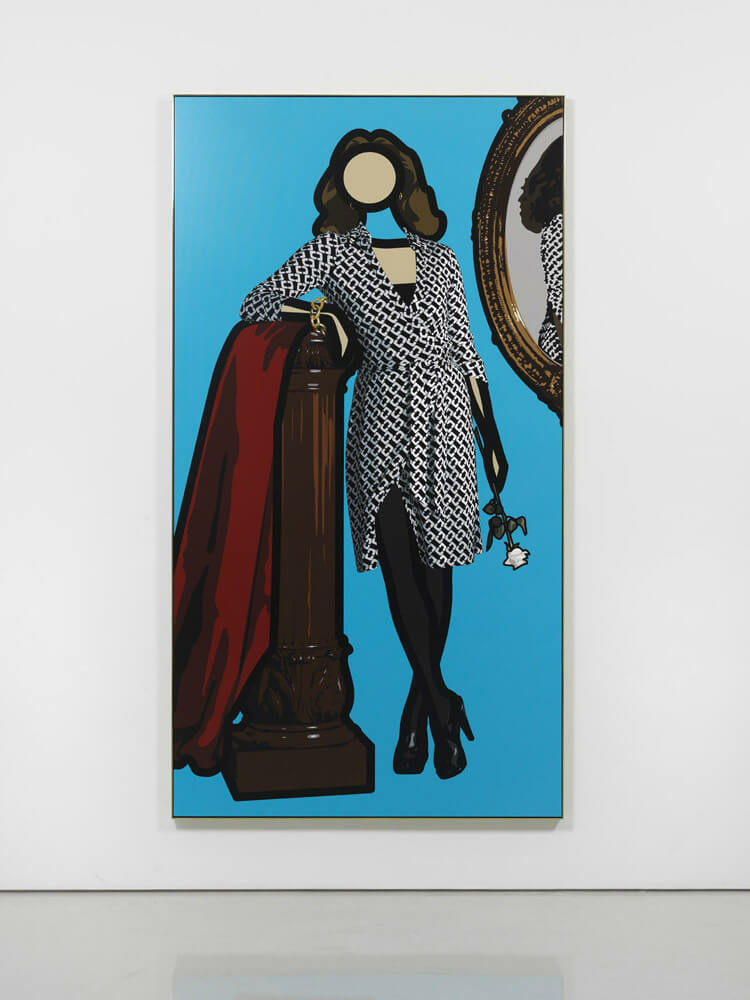 At home with Diane, 2011,
Inkjet on canvas with brass frame 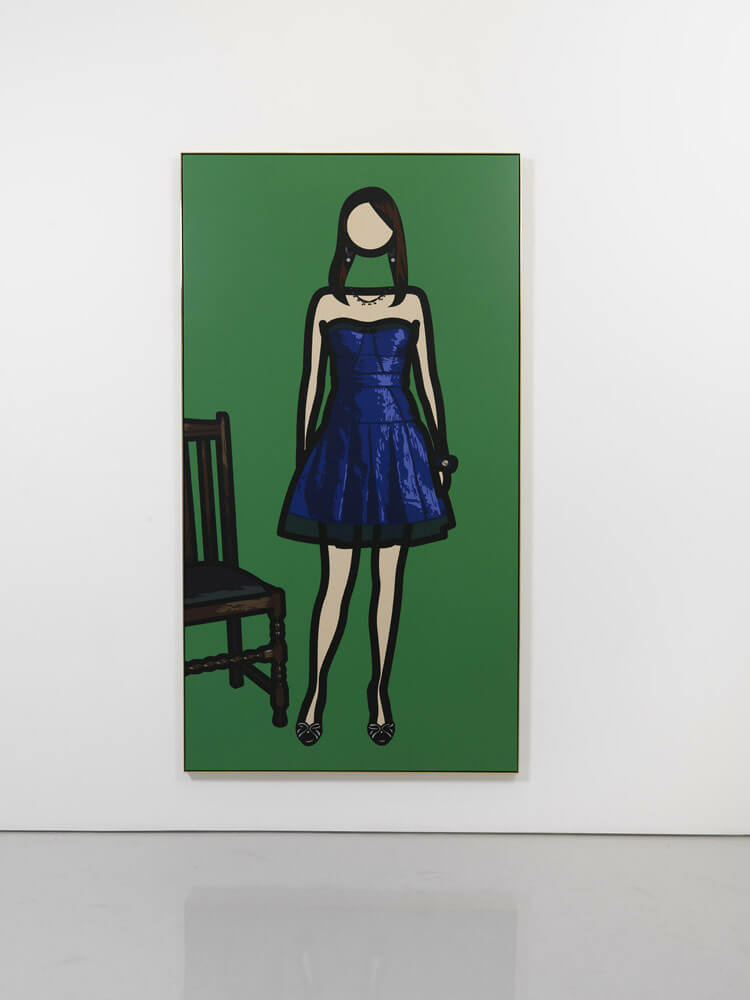 At the studio with Ika 3, 2011,
Inkjet on canvas with brass frame 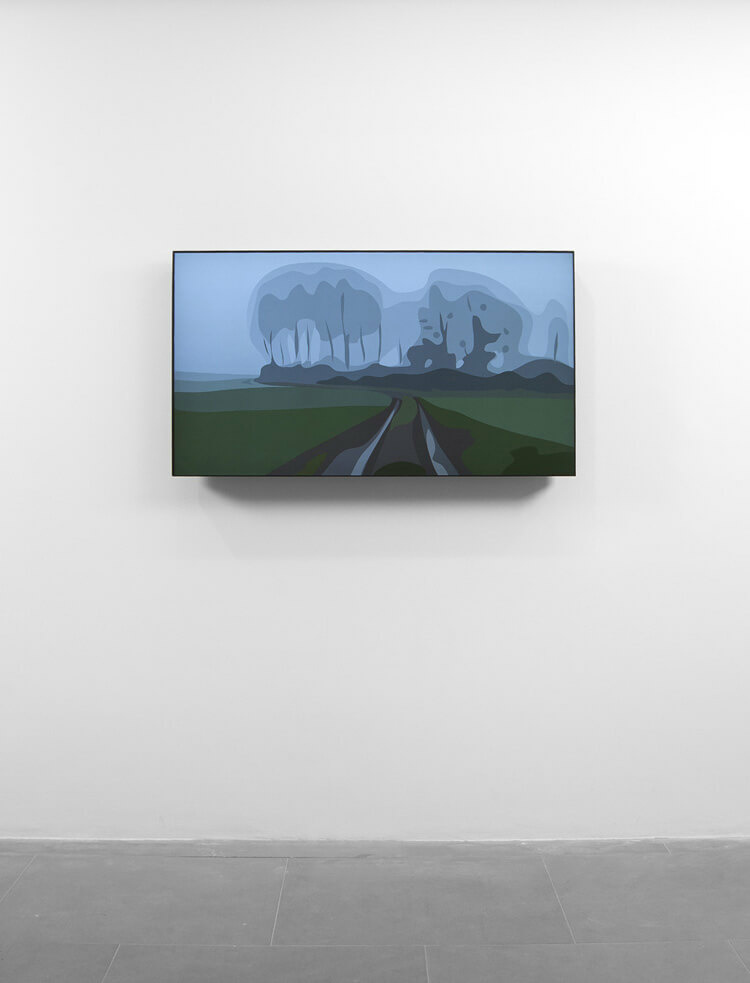 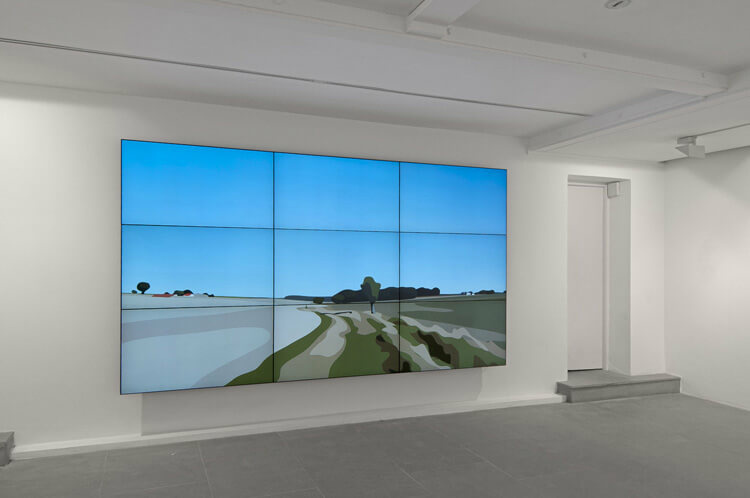 Lisson Gallery is proud to announce an exhibition of new work by Julian Opie. In the broadest single display of his practice to-date, Opie employs the concise vernacular of modern media, depicting new subjects in previously unexplored mediums as well as self referentially developing ideas from his early works.

Opie is an artist of international significance widely recognised for his distinctive contribution to contemporary art over the last three decades. His artistic preoccupation is the investigation into the idea of representation and the means by which images are perceived and understood. He reinterprets the vocabulary of everyday life, opening a discussion between the slick visual language of modern society and art history.

The exhibition includes a striking series of walking figures, which have increasingly become an important part of the artist’s practice. Simplified to the point of becoming human ‘logos’, walkers in vinyl are displayed in an extended line, recalling Egyptian friezes. In an intriguing and radical development for the artist, he has captured unknown passers-by from the streets of London rather than working with personally known subjects. The unwitting subjects reveal themselves in movement, captured in the moment, exhibiting their own idiosyncrasies in the way they carry themselves. Walking figures are also captured as still images on inlayed granite and stone.

Opie’s choice of medium is key in drawing attention to the physicality of his portraits. Two major new bodies of work mark a technical departure for Opie and juxtapose modern and classical sources.  A group of mosaic portraits explore the relationship between sculpture and painting by emphasising the materiality of the imagery. This relationship is taken further in a series of painted busts on plinths in the same room, which beguilingly unite sculptural forms with flat imagery.  The busts are the result of the artist’s use of three-dimensional scanning, a meticulous process that involves laser scanning the subject’s head from various angles. The resulting image has then been simplified, formed and dipped in resin, and then hand painted by Opie. Though created using cutting edge technology, the busts are also rooted in traditional sculpture dating back to the Roman period and beyond.

Opie’s interest in traditional portraiture, in painting and sculpture, is evident throughout the show, with subjects frequently adopting poses and props inspired chiefly by 17th and 18th Century English, Dutch and French portraits. The open book in the hand of one subject depicted in inkjet on canvas traditionally symbolises religious dedication whereas the type of material and how it is draped around other subjects in the same series, conveys their social standing and refinement.

Opie’s animations instil the fields of portraiture and landscape painting with a new sense of life and dynamism.  A series of six digitally animated landscapes on LCD screens, complemented by an internal soundtrack of natural sounds, offer a window into the idyllic pastoral landscape of central France. While his landscapes are presented in a vertical format that calls to mind the Japanese landscape prints of Hiroshige, the medium is directly inspired by advertising and signage. In Daisies. (2012), a patch of flowers bob and sway in the breeze as insects buzz from flower to flower. Other screens capture similarly tranquil moments such as airplanes passing through the night sky, and a cloud of gnats hovering in the dusk sunlight.

The ambience and evocativeness of these scenes is echoed in the film, Winter. (2012), which invites the viewer on a journey through the beauty of a bleak winter day. Compiled of over seventy digital sketches, the film is accompanied by a specially commissioned score written by Paul Englishby (award winning composer for An Education and Miss Pettigrew Lives for a Day), resulting in an immersive and cinematic experience that merges romanticism with contemporary style. This film is accompanied by three glass works which provide snapshots of the same landscape at different times of year.

A monumental double-sided LED sculpture of a galloping horse mounted on a plinth, rises above the walls of the gallery’s sculpture courtyard.  The animation - high enough to be seen from the street outside the gallery - becomes part of public life like the equine monuments around London that it directly references. Opie has a number of public art works around the city, including Ruth walking in jeans. (2010) in Regent’s Place and 3 men walking. (2008) in the sculpture park at No 30 St Mary Axe “The Gherkin”. The latter will be joined by three of Opie’s sculptures from his Caterina dancing naked. series during the summer, coinciding with Opie’s exhibition at Lisson Gallery and a multiple panel installation at the maternity ward of St Mary’s Hospital.