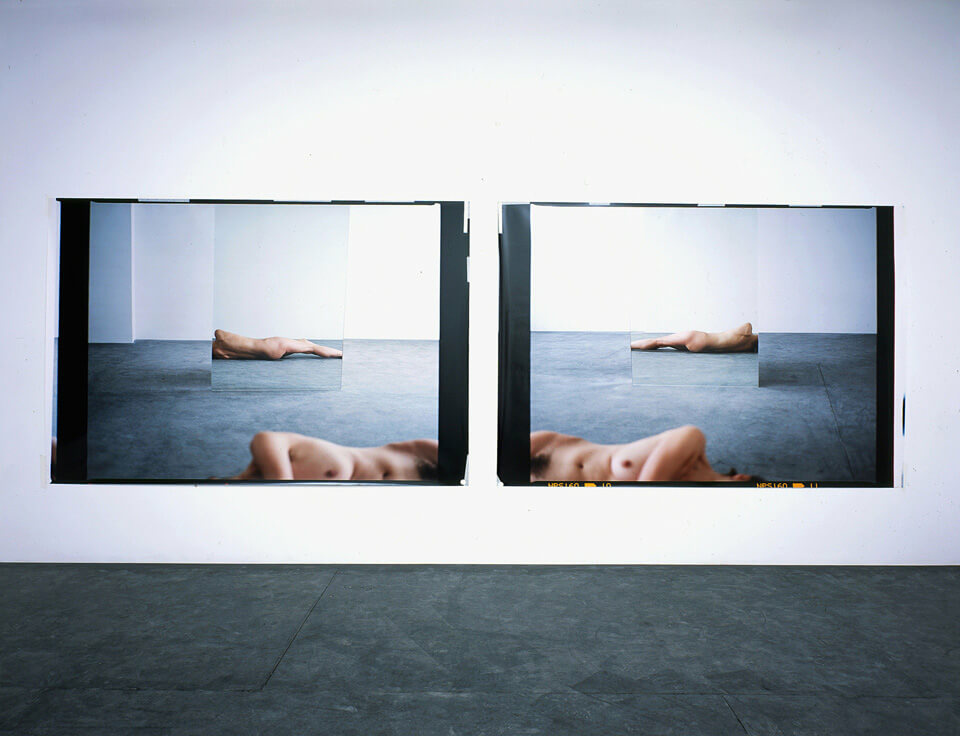 Lisson Gallery is delighted to announce an exhibition by Jemima Stehli at 27-29 Bell Street.

In this new body of work, Jemima Stehli is an identifiable presence, but far from creating self-portraiture we see her engaging in a series of ‘performances’ in which she uses her naked body to challenge notions of desire, narcissism, and sexuality. Whether or not she is enjoying using her body in this way is provocatively ambivalent. In Standing Nude (2001/2002) Stehli stages a full-length nude photograph of herself in the setting of her studio. Holding the remote shutter release in her left hand, she gazes directly into the camera yet employs a pose more reminiscent of the classicism of Botticelli’s The Birth of Venus, 1485-86. The coupling of the traditionally formal posture with her command of the circumstances indicates her complicity in the image building process while simultaneously subverting our received perceptions of the tractability of feminine beauty.

Much of Stehli’s work is shot in her studio. The chaos of the interior of the studio is deliberate and very often apparent in the images she produces, reaffirming the connection between the artist, the studio and the means of production. In Mirror no. 1, 2 & 3 (2001) we find the images becoming more abstract and painterly. Here she uses a mirror at close range to distort and confuse, at the same time continuing the dialogue between exhibitionism, scrutiny and pleasure, and maintaining the connection of artist to studio.

Again using mirrors, yet moving into the unforgiving space of the gallery, Gallery 1,2 (2003) shows the artist divested of the security of her studio. These images are more sculptural, severe, and thematically cooler than the others, and Stehli appears more vulnerable. The works are shown in the space where they were actually made and are the only photographs in the exhibition not taken in her studio.

In the mm, (2003) works, Stehli takes the idea of photograph as painting one step further. Inspired by Bert Stern’s photographs of Marilyn Monroe taken shortly before her death, Stehli playfully manipulates a red scarf as a prop to obscure her naked body while using mirrors to create images of varying degrees of abstraction. The variety of colour and tone in this series ignores the convention of consistency usually employed when printing a photographic series, and highlights the formal emphasis of the work. These works make apparent the tensions that have always existed in Stehli’s practice between sculpture, photography, performance and painting - a fascinating play on media and our expectations.