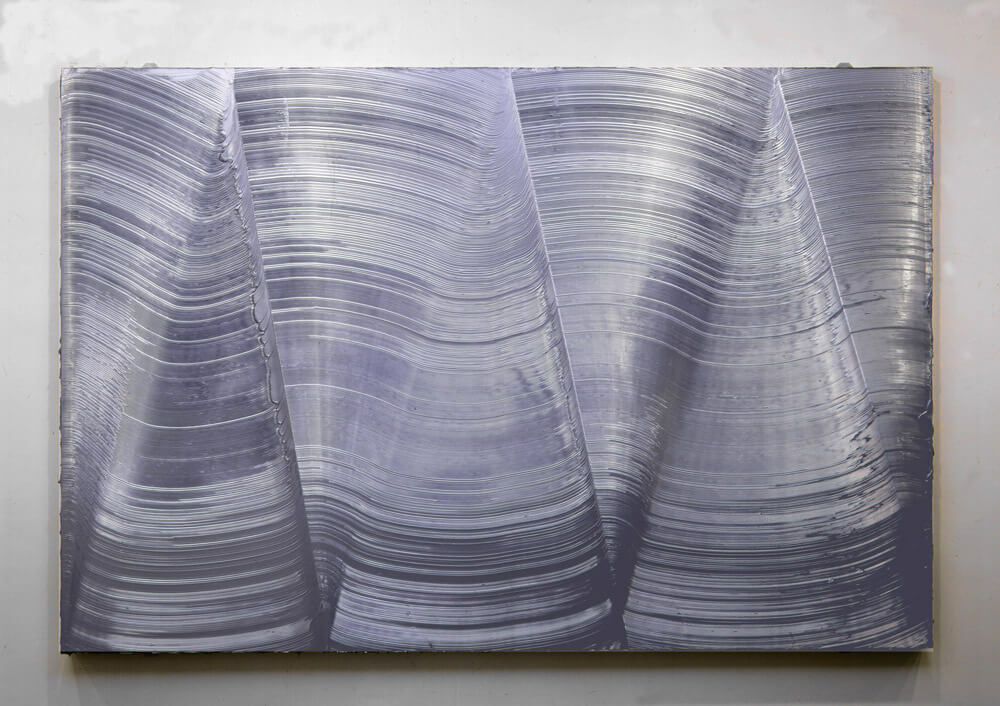 We are pleased to announce Jason Martin’s third solo exhibition at the Lisson Gallery. His work has been extensively shown in Europe, the United States and Japan. In an exciting new series of silver acrylic on aluminium, scale is taken to overwhelming proportions on 8 x 12 foot panels, far exceeding the bodily reach of the artist. The exhibition shows a subtle yet definite readjustment in Jason Martin’s approach to his work, highlighted by the reduction of his usual vibrant colour to inflections of grey and black, ensuring our attention is honed into and focused solely on the brush mark. In an exploration of new relations between scale, light, process and chance, the surface is textured through a number of layers of paint varying in shade and depth of relief. Using his bodily movement, implements with deep set fissures are traced from one side of the painting to the other in a continuous trail, letting unpredictable events unfold in the spatial and rhythmical regularity of the painting. The flow and varying intensity create a character indigenous to each work, animating the tradition of monochrome. Importantly, this latest collection also exposes a completely different body of work: the experimental use of oils on the new medium of black or white fibreglass, which allows for a gentler application of paint, creating a lighter relief. Though the painting’s creation is strongly based on the methodology of approach, Jason Martin seeks validation for his work from a more poetic instinct, allowing the viewer to form associations, directed by the form, texture and colour. As he undertakes to harness the scale and abundant lusciousness of the paint, he creates a space which offers reflection through the erotic sensation of movement’

Jason Martin will be exhibiting at Lisson Gallery from 16th September to 23 October 1999. His work is also included in the ‘Sensation’ exhibition opening at the Brooklyn Museum of Art from 2 October 1999 to 9 January 2000.