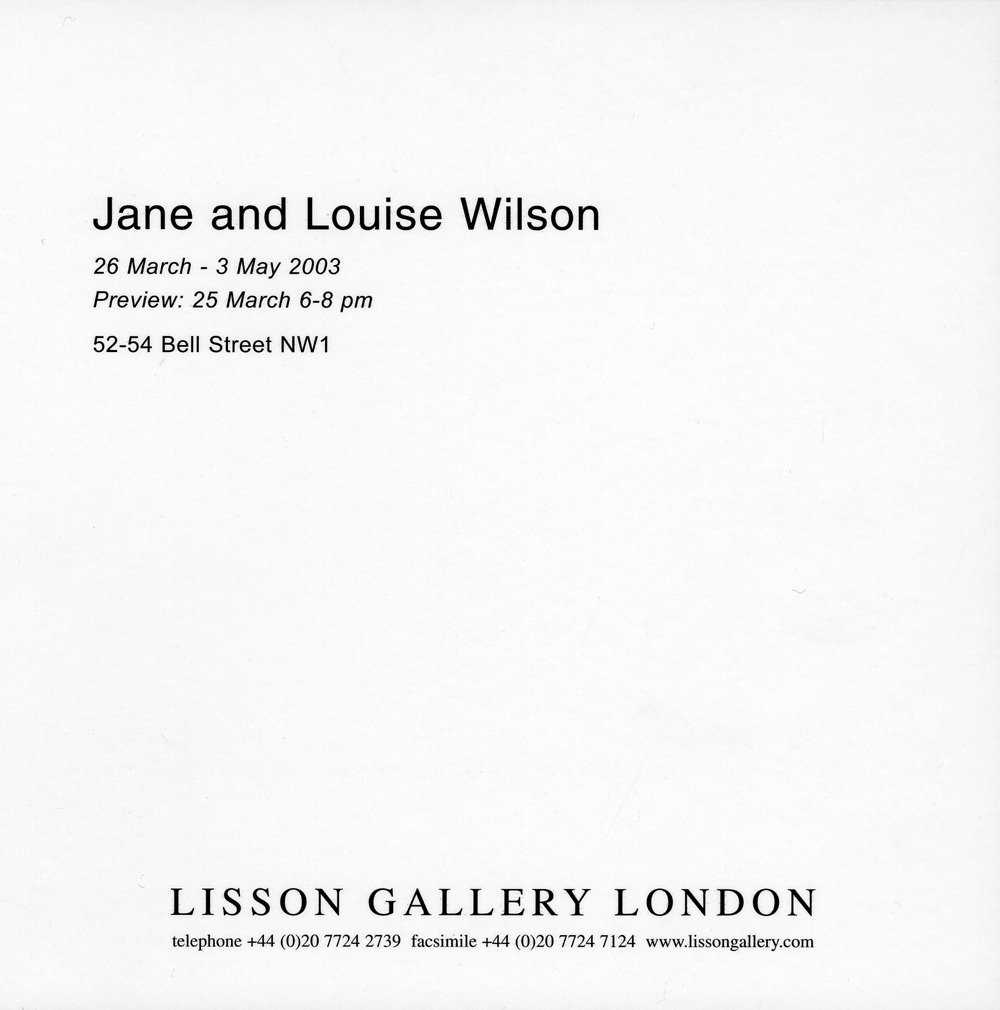 Opening on March 26th, 2003, Lisson Gallery presents an exhibition by Jane & Louise Wilson. The exhibition will include the film Dreamtime along with new works, Monument (Apollo Pavilion, Peterlee) a four-monitor installation, and Safe Light, a photographic narrative of the hyper-modern environment necessary for the manufacture of advanced microchip technology.

Jane and Louise Wilson’s work has often centred on abandoned buildings, which are still imbued with the presence and ideology of the original occupants. In Monument (Apollo Pavilion, Peterlee), named after the first moon landing, the Wilsons return to their home territory in the north of England to explore the decaying pavilion in Peterlee, designed by the artist Victor Pasmore. Built as an independent piece of architectonic sculpture, it now faces an uncertain future having become the focus of social resentment from many local residents. In Monument (Apollo Pavilion, Peterlee) we are presented with a model of neglected ‘dis-topian’ urban planning. This work is positioned as a diametrical counterpoint to Dreamtime, a 35mm film shot in Baikonur, the Russian flagship for space endeavor, in which the artists document the launch of the first manned space mission to the International Space Station. The footage collapses the narrative, moving between single and multiple views of the preparation and rituals surrounding, and leading up to the launch itself. The work is a single screen installation edited with single and multiple views, existing on one plane.

Against the crumbling neglect of Monument (Apollo Pavilion, Peterlee), in Safe Light we are invited to observe the inner sanctum of mass high technology. Here we are given a glimpse of the self-contained and ordered world of high-spec mass production. Yet, for such a harshly futuristic space, it nevertheless possesses an intangible quality that is implicit in much of Jane & Louise Wilson’s work.

In 1996 the sisters were part of the studio program of the Deutsche Akademische Austauschdienst (DAAD), Berlin, and in 1999 they were short- listed for the Turner-Prize.