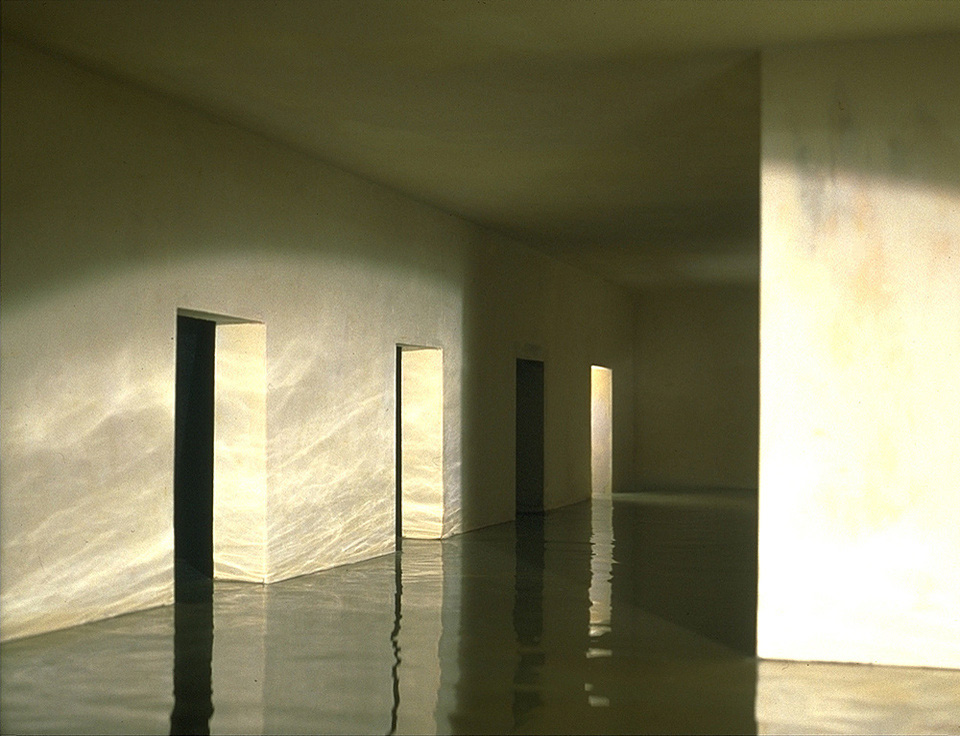 Casebere’s photographs are two dimensional representations of three dimensional sets and models that the artist constructs in his studio based on photographs of existing buildings. They are generic structures of the human cultural environment in which the artist attempts to de construct the fundamentals of art and architecture. Desolate, empty interiors in warm earthly colours, skilfully illuminated so as to imply the penetration of natural day or nocturnal light from different apertures, Casebere’s spaces are compelling for their simple beauty and their hidden mystery. They transform the spectator to a lonely witness of uninhabited though haunted interiors in which a number of doors, corridors, windows or tunnels seem to suggest undisclosed scenarios. During the last two years, Casebere’s work on the architectural and psychological landscape of institutions of confinement (e.g. a prison cell, an asylum, a monastery, a hospital ward) was much acclaimed for its successful portrayal of very complex and sensitive social and psychological issues by very minimal means.

In his new body of work, the artist brings drama into the foreground by introducing the primary elements of water and mist. In Flooded Hallway, 1998, the water filled offices seem to have succumbed to nature and time. A chain of responses ranging from surprise at what went wrong, apprehension, to a sense of threat, to a resigned tranquility is provoked on the part of the viewer. In Four flooded Arches, 1999, the elements of water and fog form part of a subterranean environment that could be a sewer. The fluidity of nature works as a catalyst that transforms the image to experience by introducing the dimensions of movement and sound. Ultimately, reality becomes an archetypal psychological space beyond time. The work has been praised for its subtle mastery of scale and technique.

James Casebere lives in New York. He has exhibited extensively in the United States at galleries such as at the Whitney Museum of American Art, the Museum of Modern Art, NY and the Museum of Fine Arts in Boston. He has also shown widely in Europe including recently a solo show at the Museum of Modern Art Oxford; UK, The Centro Galeco de Arte Contemporanea in Santiago de Compostela, Spain. This is his second show at the Lisson. Casebere has recently been short-listed for the Citibank Private Bank Photography Prize 2000. The prize exhibition opens at Photographer’s Gallery from 11 February until 25 March 2000.