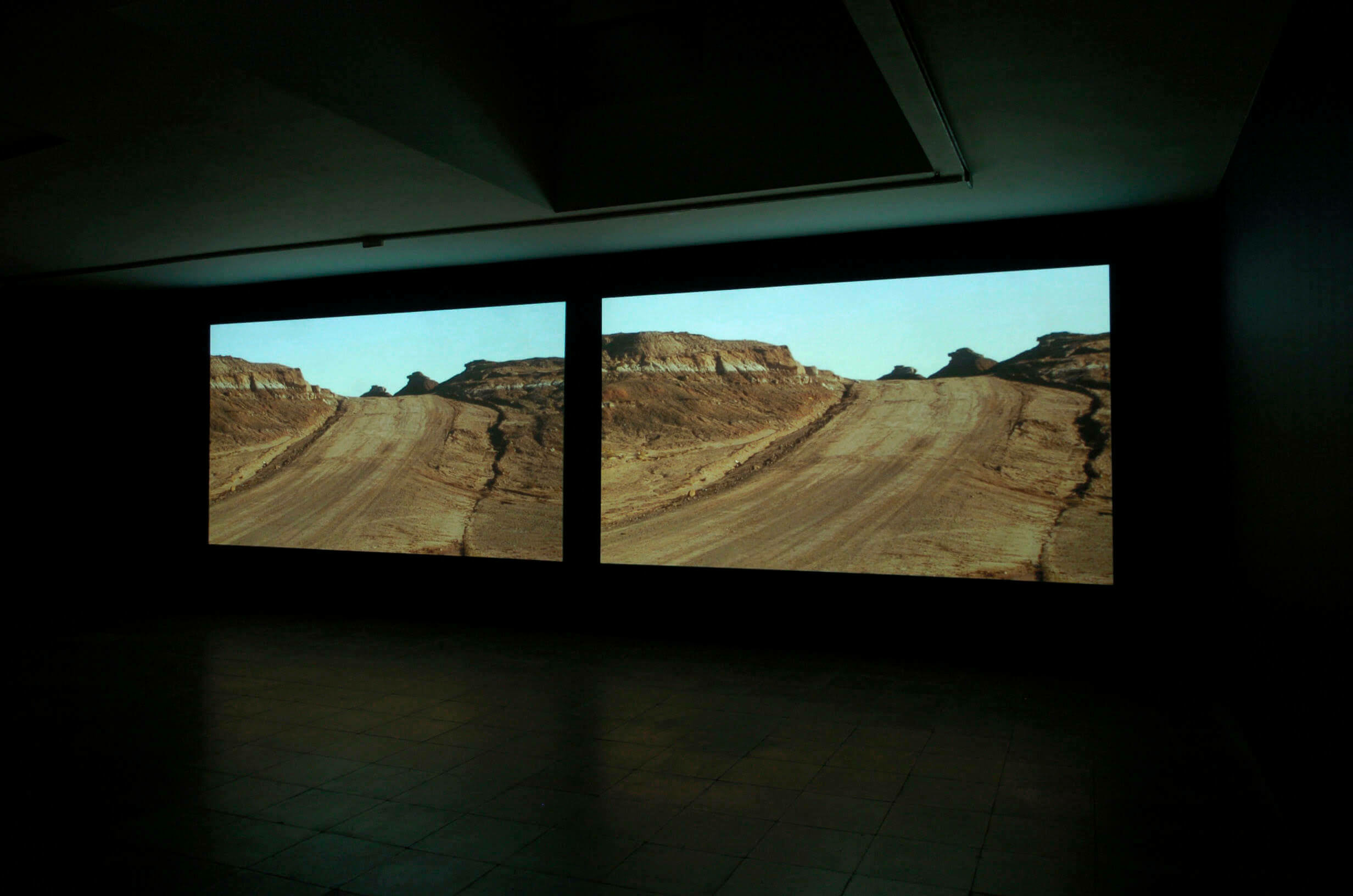 Lisson Gallery is pleased to announce a new exhibition by Igor and Svetlana Kopystiansky, previewing on Thursday 6th July from 6-8pm. The exhibition will include new photography and video works as well as vintage photographs, paintings and works on paper.

In the new work ‘Sandglass (Establishing Shot)’ 2005, originally commissioned by the Scottsdale Museum of Contemporary Art, the Kopystianskys present a two screen video projection set in the Arizonan desert. The viewer is presented with two photograph-like projections which seem to be still but are actually moving imperceptibly, heading inexorably towards each other until they meet to become momentarily one image, before moving past each other again. The stillness of the image is an illusion and the movement seems to be motionless, thus eliding the languages of photograph and film.

‘Sandglass (Establishing Shot)’ is conceptually based on and takes its title from the establishing shot -an important filmic devise which is usually a long shot at the beginning of a scene intended to inform the audience about the locale or time of the action. The work plays with and investigates the nature of the filmic medium itself: film is constituted by a succession of still images, which are the only reality, and their ‘movement’ is a result of a purely mechanical shift between the lens and a source of light.

The imagery of the desert is continued in the Kopystianskys’ photographs of the Arizona horizon, entitled ‘Fade’, 2006, where the sense of the location is governed by the camera’s perspective. Each work is a diptych with one image being taken by Svetlana and the other by Igor. These photographs, whilst beautiful and poetic, also constitute an investigation of the photographic medium itself. Here the Kopystianskys highlight the subjectivity of photography, engaging in the discourse on photographic truth initiated by Roland Barthes in Camera Lucida (1980).

By foregrounding the techniques of film making and question the notion of representational truth, the Kopystianskys invert Jean-Luc Goddard’s dictum that “Photography is truth. And cinema is truth twenty-four times a second.”

The exhibition at 29 Bell Street consists of vintage photographs, drawings and paintings from the 1970s and ‘80s as well as recent video works and can be as a reflection on the concerns that have informed Igor & Svetlana Kopystiansky’s entire practice.

The roots of the Kopystianskys work can be found in Russia’s Absurdist literature which has its Western European corollary in Samuel Beckett. The Kopystianskys cite as a particular reference the poet Danill Kharms, a central figure in OBERIU, or the Society of Real Art, the Leningrad avant-garde movement of the 1920s

and 1930s. The Absurdists defied narrative, linguistic and logical conventions at the time when the Soviet authorities were codifying their own stifling aesthetics.

Kharms’s work can be seen as a meditation on the meaninglessness of human existence and at the same time the desire of people to have meaning in their lives. His strategy in writing was fairly simple: he posed a situation in which something happened that his reader wanted to make sense of.

Motivated by the same desire as Beckett, the Kopystianskys protest against the prescriptive and limiting nature of realist conventions in art and the “the hypnosis of positivism”. The Kopystianskys’ work is imbued with a sense of playfulness, using the devices of repetition and seriality that mitigate the idea that rationality taken to its logical conclusion is the reductio ad absurdum.

The series of works on paper generically titled ‘Plays’ are based on the endless repetition of banal actions as a direct link to the Russian Absurdist tradition and Beckett. The site for these ‘Plays’ was a sheet of paper which was considered as a scene for the action or in the artist’s private space. In the work ‘Direct Action: Line Drawn From Right to Left’ and ‘Reversed Action: Line Drawn from left to right’, 1980, Svetlana Kopystiansky’s interest in the absurd is continued through the deadpan humour of these works.

A sense of the absurd is evident in ‘Play in One Act’ 1981, in which the seemingly banal placement of two chairs in a sequence of different positions animate the objects and conveys the absence of subjectivity.

Beckett is a direct reference for Svetlana Kopystiansky in her series of Seascape paintings from the 1980s, in which lines from his texts are inscribed on canvas. In the paintings two languages, verbal and visual both complement and contradict each other. It is impossible for the viewer toaccept these languages simultaneously, the consciousness switches from one to another one only: either we can read or see the visual shape created by text. A lyrical whole is created by the interplay between text and image.

Igor Kopystiansky’s ‘Pictorial Study’, 1975 consists of a series of black and white photographs of the artists fingers dipped, one by one, into a pot of ink. With conscious reference to Malevich, the artist took a can containing enough paint to paint a black square but instead of creating an autonomous object, painted his own fingers and returned the work to his own subjectivity. This apparently simple gesture could also be read as a comment on the heroic act of artistic creation and the myth of Jackson Pollock.

The interplay between stillness and movement is re-enacted again in a video projection ‘Yellow Sound’ entitled in a reference to Kandinsky, presented for the first time in the Kunsthalle Fridericianum in Kassel, 2005. The work is composed of found film footage of a vinyl record which appears still if it were not for the incidence of dust and film scratches which indicate that the time is flowing despite an illusion of the opposite. The duration of this work is 4:33 in a reference to the work by John Cage.

The video installation ‘Pink & White: A Play in Two Time Directions’, 2006 contains short excerpts of found film footage played simultaneously forwards and backwards, with the two images overlapping for just 1/24 of a second. The use of repetition in the film footage echoes the Absurdist references of the

Kopystianskys’ early work and the exploration of time and duration in this video Play loops back to those concerns investigated in the Arizona project.

Igor & Svetlana Kopystiansky will have a major two-person exhibition at the new ESPOO Art Museum in Finland, opening February 2007