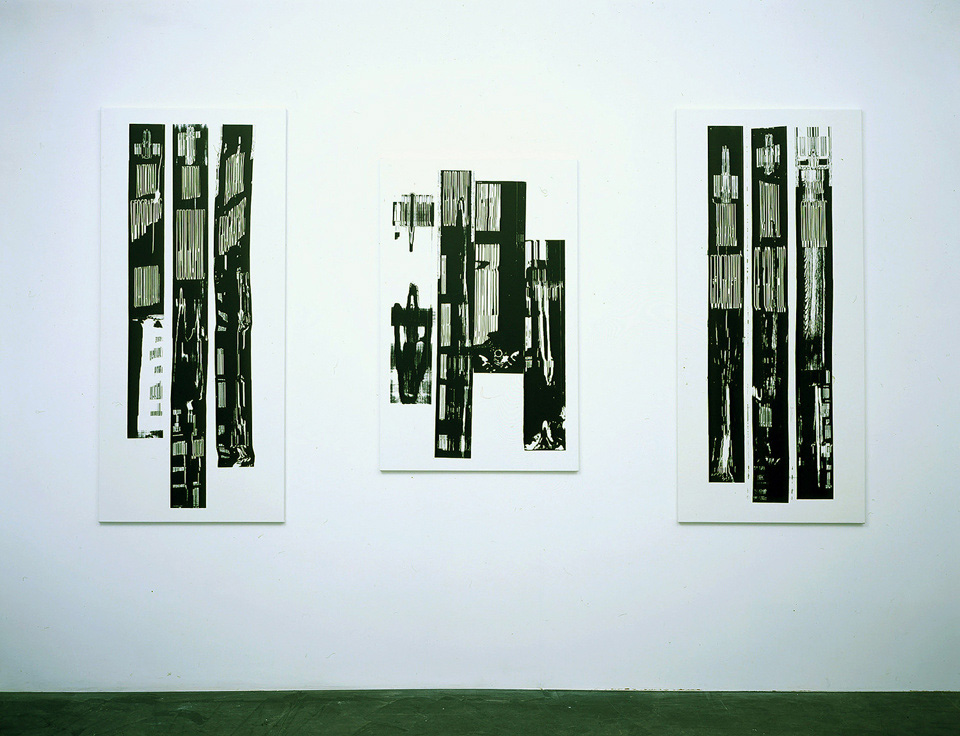 Graham Gussin’s new work deals with notions of the uncanny and the sublime, a recurring theme in much of his practice. Gussin uses film as material and reference and is interested in how filmic images and ideas spill out into reality and occupy space in our subconscious. He takes images that we know to be sinister in origin and inverts them by placing them in contrasting situations or environments. In Dark Light Piece (Texas Chainsaw Massacre Mobile), 2003 he constructs a simple mobile, but instead of primary colours and shapes, he uses stills from the seminal horror classic. Rather than the violence we might associate with that genre, he conversely selects incidental, rather anonymous shots from the film, which would in fact be desolately beautiful if the viewer were unaware of their source. The mobile itself becomes a literal play on suspension, floating above us like a cloud, its dark subject matter in stark contrast to its decorative form.

Spiral, 2003 is a continuous icy white neon spiral of words running one into the other that interrogates the notion of perceived ‘conditions’ and psychological states. ‘Unknown’; ‘vague’; ‘unsure’ are adjectives which trigger atavistic and familiar emotional responses and yet are also terms of disregard; they imply a state of non-existence.

Doppelganger, 2003 investigates ideas of repetition and circularity whereby the artist attempts to see through the eyes of someone else. Using a rotating slide projection Gussin documents a trip he made through Iceland in 2000. Subsequently, in 2001 he advertised for a volunteer or ‘doppelganger’ to replicate his Icelandic journey exactly —the same flight on the same date, same hotel, same room. A mobile phone number was supplied as the only point of contact for the anonymous volunteer to arrange to collect tickets, itinerary, addresses and other necessary information. While Gussin was in London, his doppelganger was to experience, as closely as possible, events that had taken place a year before. The viewer too is intrinsic to the work and inevitably becomes the doppelganger as he or she follows the logic of the work. Again this embodies themes of the visible and invisible, becoming a complex visual trap.