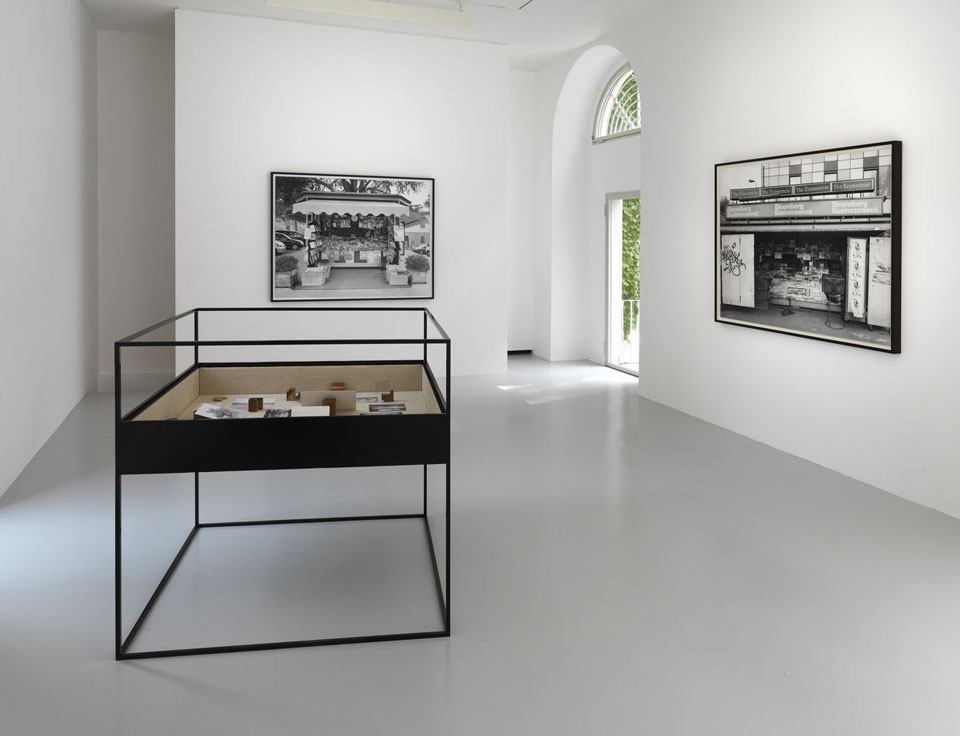 An ongoing practice of time-shifting photographs, depicting recent but dated displays of magazines and newspapers, forms the centre of an exhibition of new work by Gerard Byrne, his first solo show in Italy since he represented Ireland at the Venice Biennale in 2007. Each of these news kiosks, of the sort typically found in city centres and shopping precincts all over the world, has been captured by Byrne’s lens over the past half decade or so, freezing the social, political and cultural contexts relevant to each particular time and place – perhaps revealing the salient headlines of the day or even which cars, celebrities, musicians and sportspeople were popular at that specific moment. Collectively grouped under the heading Newsstands, each unique black-and-white print, printed directly from a single negative – whether photographed in Mexico City, Paris or Brussels, and especially for this exhibition in Milan – has its own constantly morphing title, reflecting in prose the time past from when the photograph was taken: Ten months, three weeks and one day ago, for example.

Downstairs, a new video work further explores Byrne’s already deep engagement with Irish author Samuel Beckett’s En Attendant Godot (Waiting for Godot), previously the subject of a series of sculptures and photographs by the artist, based on the playwright’s minimal stage designs and directions. In Byrne’s new film, He searches for the contrary of saved (2014) the sound of a voice narrates instructions to actors performing the rehearsal of French production the famous avant-garde play. The voice revisits the actors’ instructions as written by Beckett into the script. These instructions are very specific directions on the physical and temporal realisation of the play. Video footage of a full dress rehearsal, shuttles maniacally back and forth across the screen, in an asynchronous, fragmentary response to the call of the instructions. The play, understood here as a literal artefact of 20th century civilisation, is twisted, turned, scrutinised and antagonised in an illiterate manner.  The materiality of the text, of the performance and its documentation emerge as an irresolvable, indefinite loop.

A new sculptural unit, Untitled (die), inspired by Tony Smith’s Minimalist sculpture Die, early Robert Smithson sculptures, Donald Judd works and Poul Kjaerholm table designs, serves to house an aggregation of imagery and various remainders that suggest ideas of the residual fragment, the decontextualized image and the history of photographic imaging technologies. The work offers a dynamic between the whole (the cube) and the fragment (the contents), acting as a time capsule of the artist’s different projects, thoughts and lines of enquiry.

As a cross-section of Byrne’s abiding interests and current practice, this exhibition combines work that variously rehearses and revises historical ‘coordinates’, through reference to canonical theatre (Beckett) and to the quotidian realities of the newsstand, either re-read as a sort of ‘flash-back’ (the photograph), or through a lyrical combination of images combined in a vitrine. 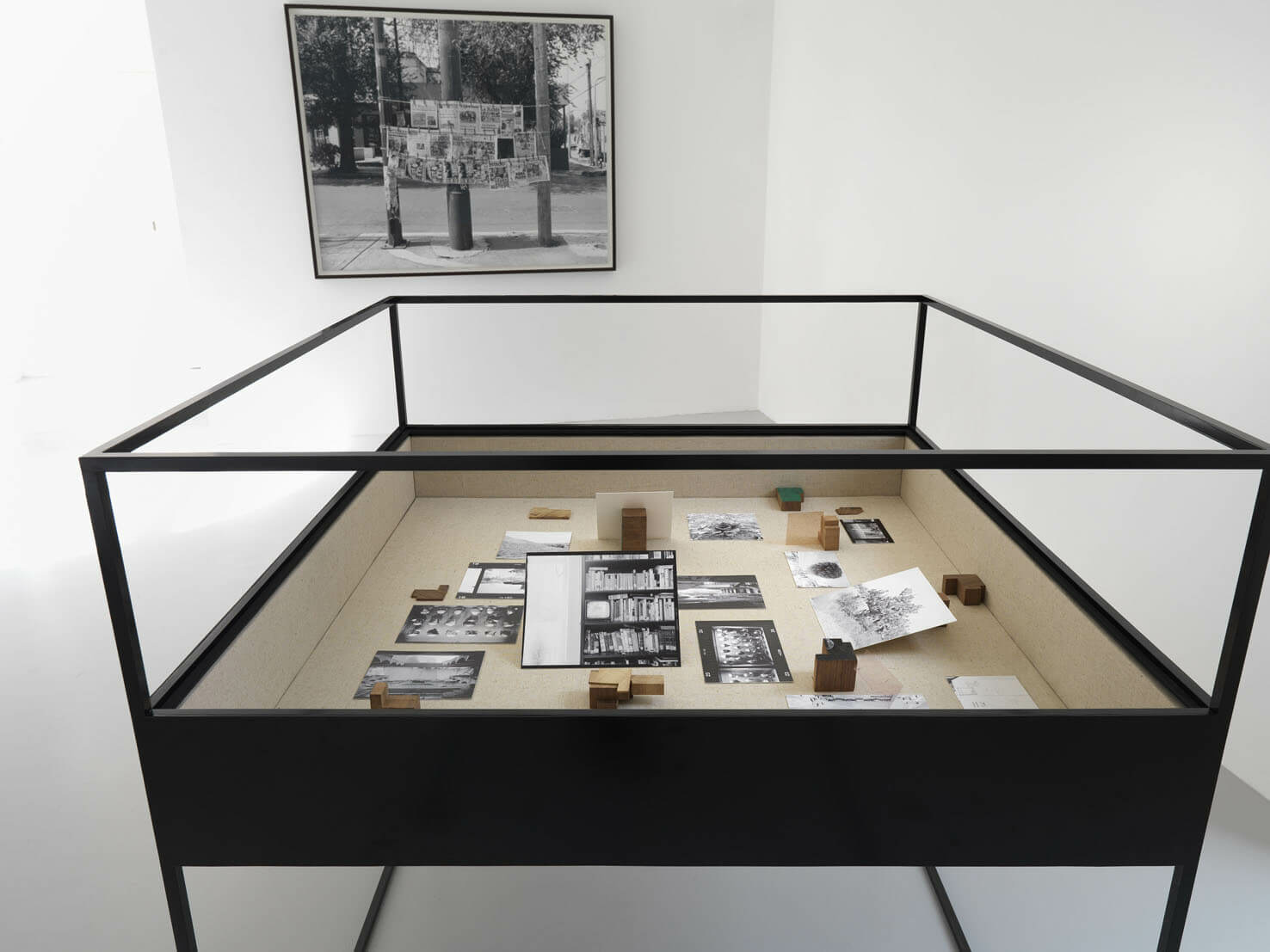 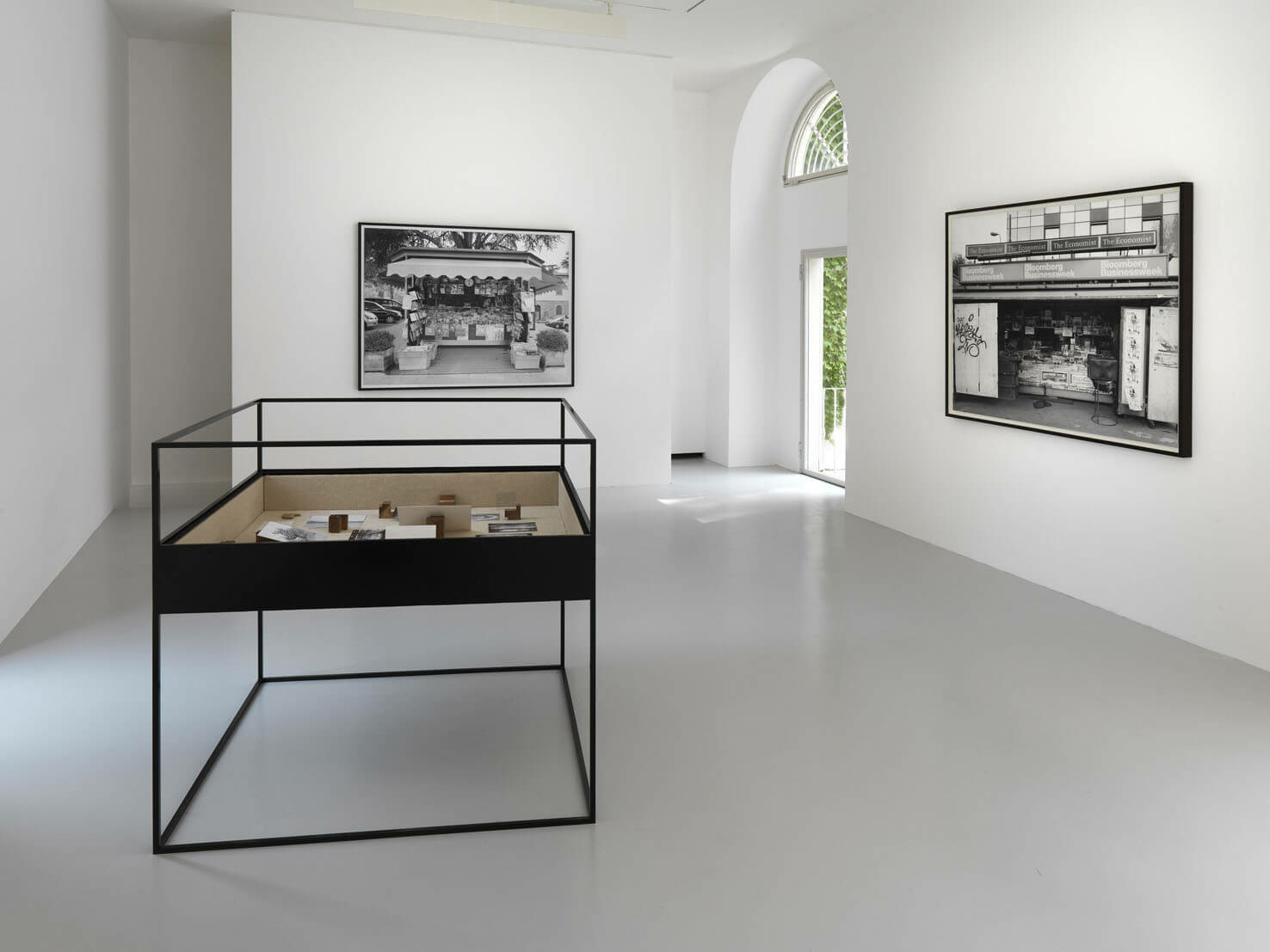 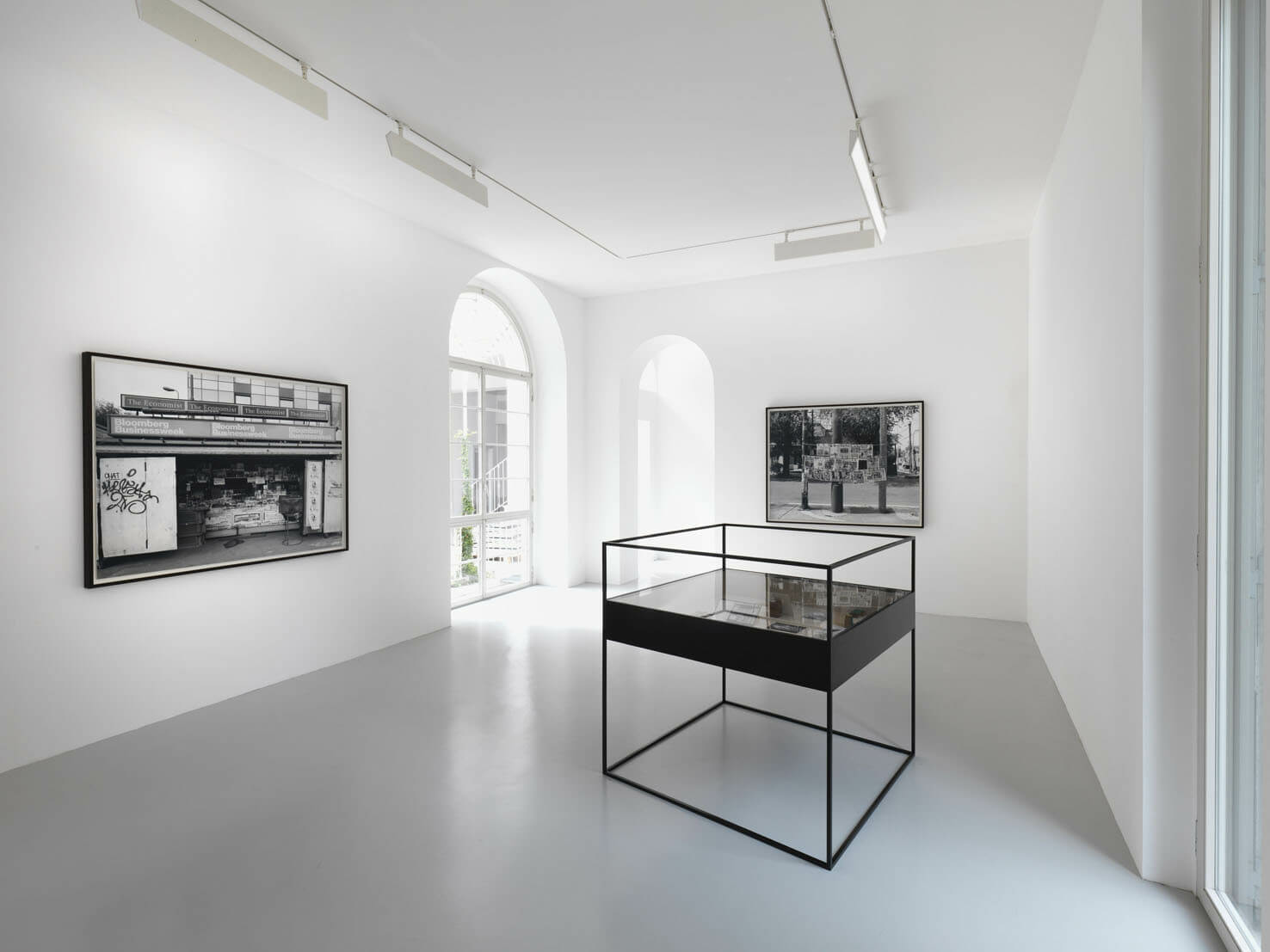 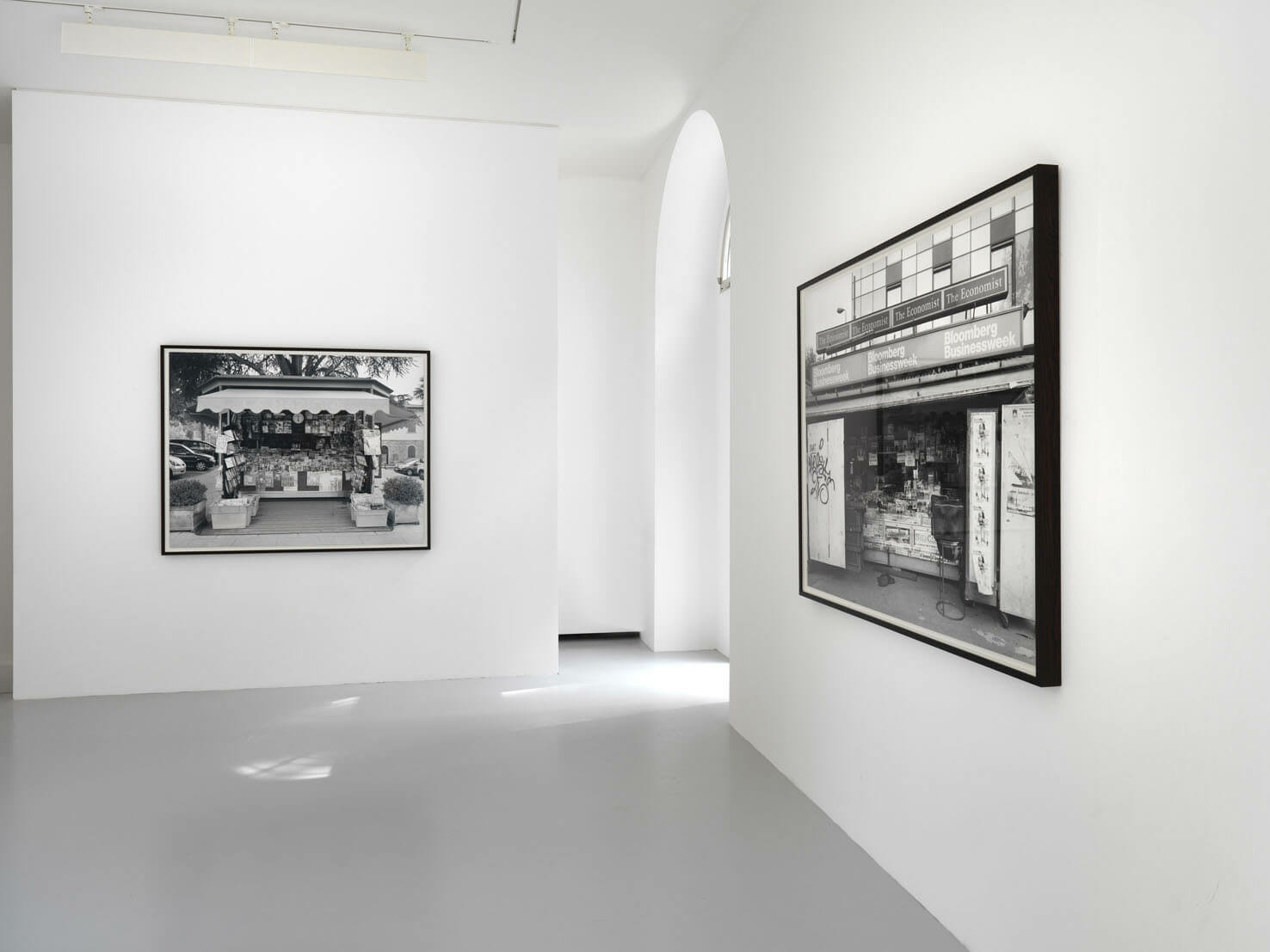