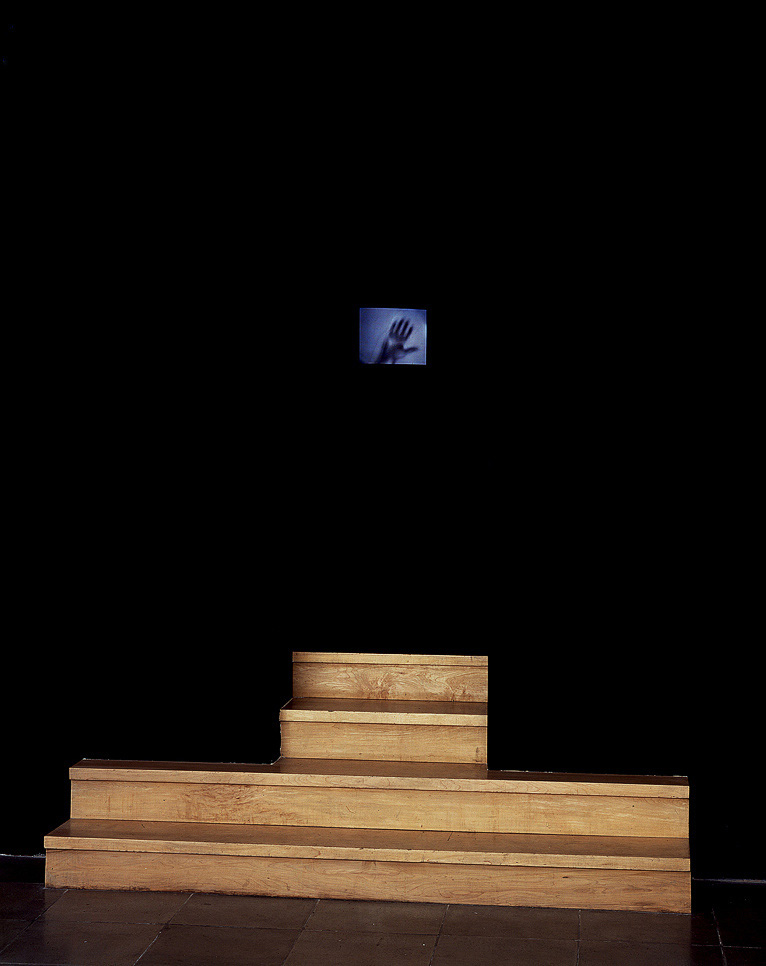 ‘The expression of his face was not so much of terror as of mortal sickness... he reeled, put his hand to his throat, stood swaying for a moment, and then, with a peculiar sound, fell from his whole height face foremost to the floor. I went down on my knees at once. On the floor close to his hand there was a little round of paper, blackened on the one side. I could not doubt that this was the black spot.’
- Robert Louis Stevenson, Treasure Island, 1883

This exhibition presents a new series of Polaroid large scale photographs from the Black Spot series by Douglas Gordon as well as a recent video work Think About It Black Spot photographs are derived from Treasure Island where the portentous black spot on the palm of the hand becomes the mark of death. Gordon has taken thirteen Polaroid photographs of his left (sinister) hand and enlarged it to a monstrous scale where the image of the hand spans up to three feet. This process of one hand taking a photograph of the other produces a fragmented, duplicitous self portrait. Think About It shows a hand endlessly hitting the lens of the camera that films it. As the image shifts to and fro, the hand comes in and out of focus, shedding light and then darkening the space around itself. Like the Black Spot images, the hand suggests suffocation, smothering, and a desire to escape the camera. Douglas Gordon recently had major solo shows at the Musé Arte Moderne de la Ville de Paris, and the Tate Liverpool. He is currently preparing his first large scale exhibition in the US which will open at the Museum of Contemporary Art in Los Angeles on September 15, 2001. This exhibition will tour different venues and finish in New York at the Guggenheim and Public Art Fund venues in late 2002. Gordon’s next solo museum exhibition in Britain will be in Summer 2002 at the National Galleries of Scotland, Edinburgh. This exhibition will also be shown at the Hayward Gallery, London, in Autumn 2002.