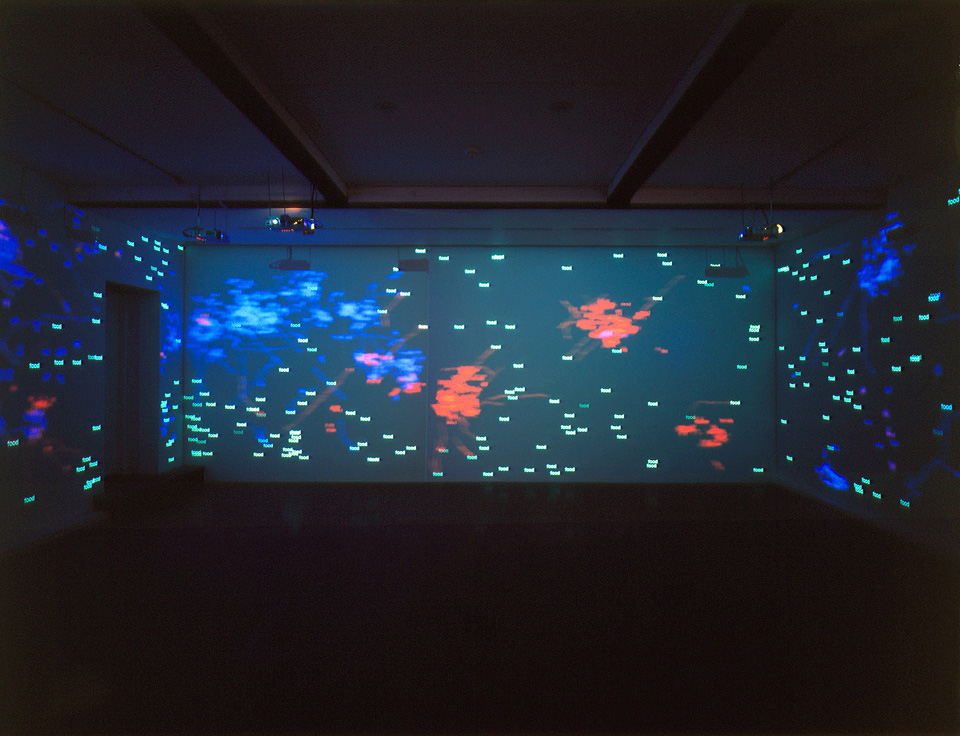 Lisson Gallery is pleased to announce its first solo exhibition of work by Charles Sandison.

The works in this exhibition consist of text generated by computer software and projected site specifically onto the walls at 29 Bell Street. Families of words are programmed to react to each other in particular and random ways, simulating the most basic social networks and fundamental patterns in communication and behaviour.

In Yes/No, two groups of word types (one of YES, one of NO) burst onto the wall. The two word types are programmed to repel each other, with the exception that each individual word within the group randomly selects a target word of the opposite type and seeks it out. On collision, there is a 50/50 chance that either YES will become NO or NO will become YES. The visual effect is that the YES type words maintain a tight knit group, while the NO’s appear to surround them. The YES words become more dominant until they optimistically eliminate one last NO.

In Tribes, Sandison takes a vocabulary of nine words and from this simulates a sequence of human reproduction and development. Words move in different ways; the child’s movement is confused, mothers are never far behind, a virus is rapid and unerring. Given sufficient time and space, the potential exists to develop complex social units that exhibit seemingly organised behaviour.

Sandison will also be presenting 4 new works on LCD monitors – the first time he has presented work in this format. In one piece, the words of Darwin’s The Origin of the Species and The Old Testament disperse and regroup, searching for space on the line. On another screen, male and female characteristics interact and evolve, forming silhouetted figures of a man and woman.

Charles Sandison (b. UK, 1969) lives and works in Tampere, Finland. He studied at Glasgow School of Art and first exhibited at Lisson Gallery in the historical group show Wonderful Life, 1993, with many Glasgow contemporaries including Christine Borland, whose show at Lisson’s new space opens 21 February 2004. Sandison has shown extensively in Europe, exhibiting in both group and solo exhibitions. His work is included in collections including Kiasma, Finland, Fonds National d’Art Contemporain, Pompidou Centre, Paris, the Museum of Contemporary Art, Luxembourg and the Collection Yvon Lambert, France. Sandison currently holds a professorship at Le Fresnoy National Studio of Arts, Lille, France. He will present a solo project at this year’s Art Basel Miami Beach, 2003 with Galerie Frank, Paris and will present a project at Musee D’Orsay, Paris in 2005.