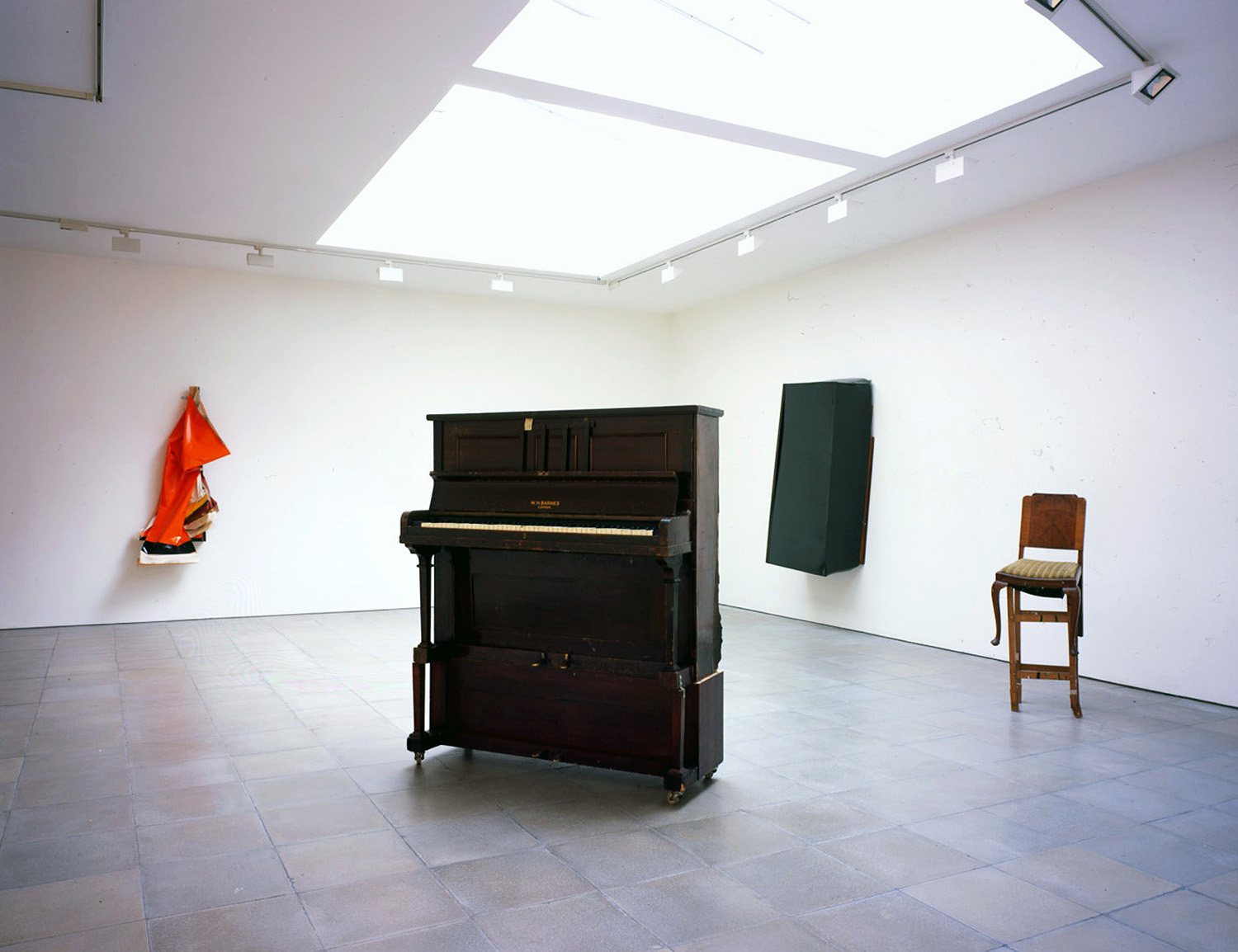 “The first time I cut the canvas, which was in 1996, I hung it in the corner and it became like an animated object, but it retained all the characteristics of painting. The painting was called Ashamed. So even though the paintings have got this object-like quality they still remain paintings. It’s very important that painting is stationed within the parameters of tradition, otherwise it has no meaning. I am trying to research the language of painting.”

At first glance, de la Cruz’s paintings appear to have been vandalised or flagrantly abused. Mangled stretchers, slashed canvases, twisted and violated, are hung on the wall like macabre trophies, and yet it is this deliberate and systematic desecration of the canvases, which informs the end result. Emotionally raw, yet canny and sharply ironic, de la Cruz confronts the ‘problem’ with painting by incorporating its very destruction into the work itself. “The moment I cut through the canvas I get rid of the grandiosity of painting.” Violent, unapologetic and often darkly humorous, her work unabashedly exposes a visceral emotionalism, breaking the barriers of the established norms of painting. Implicit is the sense that a scene of frenetic violent activity has just taken place leaving in its wake the strangely paradoxical feeling of spent energy and a sense of calm; a visual catharsis.

Overtly playing on the commercial side of art, de la Cruz categorises her paintings by serialising them. In her ‘Commodity’ paintings she produces multiples of the same work, each serving to activate and feed the other paintings, some even having a “parasitic” nature. Because of this they can be repeated and made in different sizes large, medium and small, the common denominator being that they each represent the other. “As part of the process I often use every part of my work-- every bit of every painting can often be used in another painting, so I kind of ‘recycle’.” This new work is distinguishable from earlier series in that none of the paintings are recycled as such, but are used as containers of other paintings - “clutter bags”.

In Clutter, de la Cruz reintroduces aluminium and metal objects. These works are based on paintings that stood neglected outside her studio for a couple of years. “I covered them with a very new canvas and called [the new work] “Clutter with blanket”. In another work she puts twelve complete ‘paintings in waiting’ she collected from around the studio, into a metal box. “I took every single painting that was a real object, put it back in the frame, folded it, and then put it in a box. I call the entire series Clutter, which relates to painting, the absurdity and excess of painting. I’m not looking for any kind of spiritual sense of being for the painting. But the excess, the abject is beautiful.”

Angela de la Cruz lives and works in London. Forthcoming projects in 2004 include Forum, Barcelona in May, ‘Manifesta V’, San Sebastian, Spain in June and a 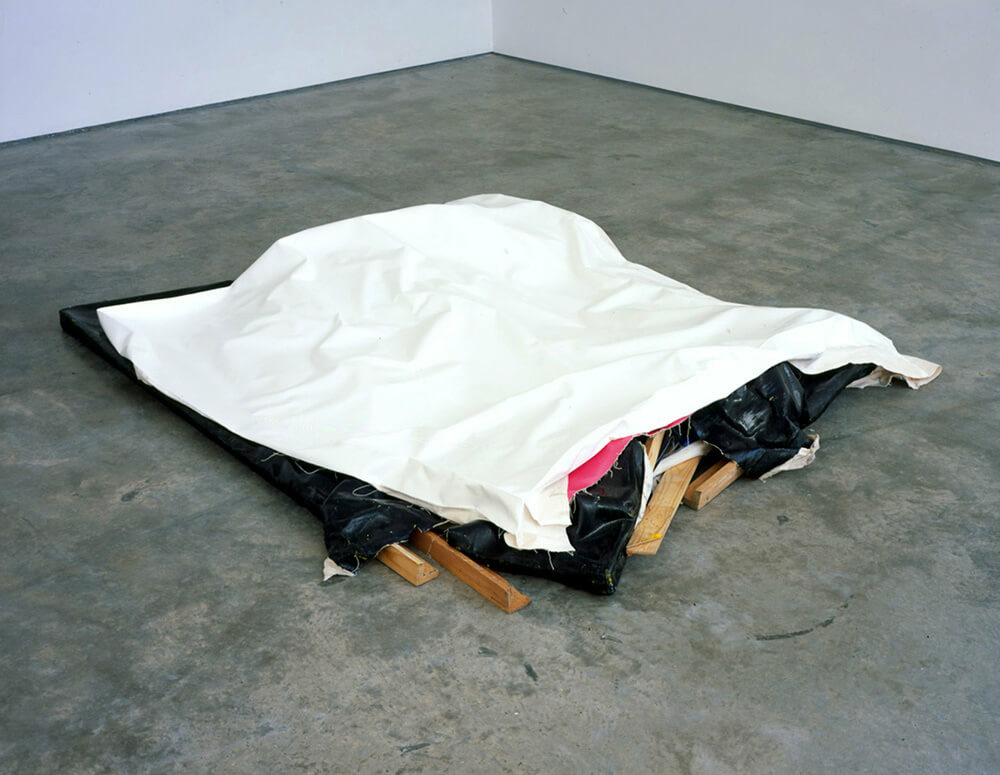 Oil and acrylic on canvas 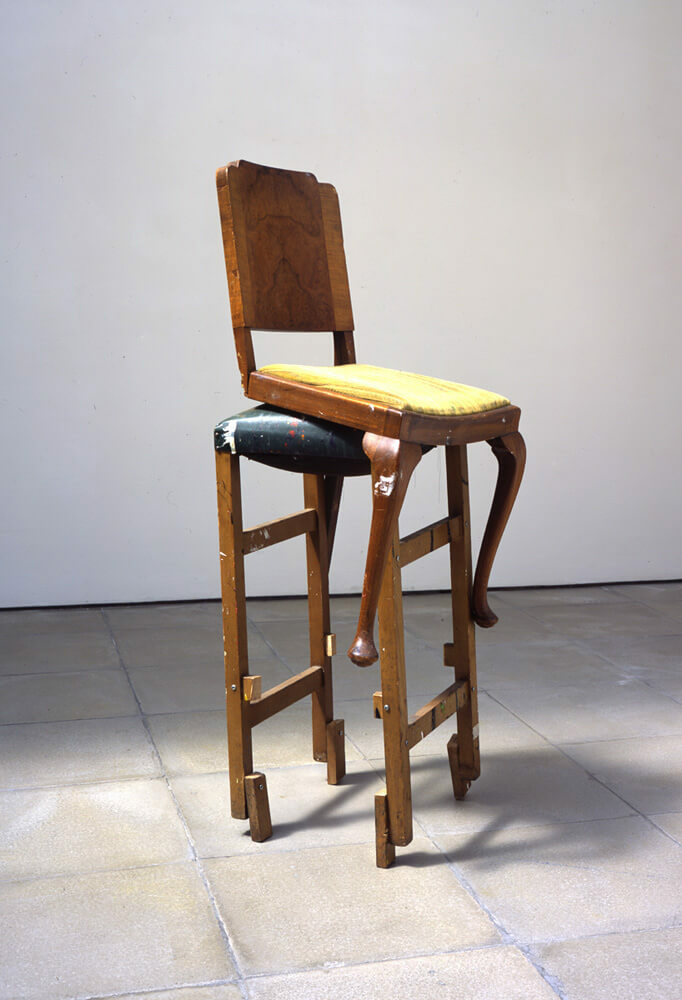