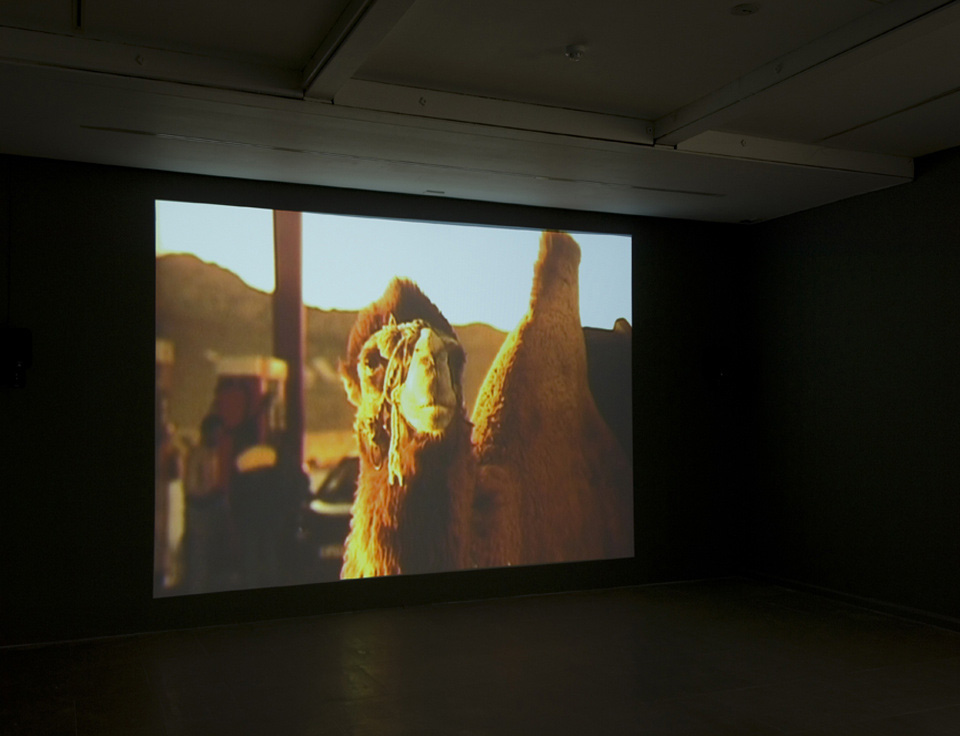 For their second exhibition at the Lisson Gallery, Allora & Calzadilla have developed a group of works that address ‘figures of speech’ in literal, metaphorical and ironic ways.

Sediments Sentiments (Figures of Speech), 2007, is the last in a trilogy of works that explore the interplay between militarism and sound in the context of today’s global state of war. The work consists of two large truncated forms, with tunnel- like passageways that intersect the sculptural masses. Made of foam and white plaster, they were conceived as 1:1 scale models of some future disaster - broken planes, masses of geological rock forms and subterranean tunnels are conjoined together in a manner that recalls the aftermath of an explosion or a natural cataclysm, whose colour can only be added by the events of a history yet to unfold.

These amorphous formations function as stages for a satirical dissection and re- interpretation of the leitmotivs, symbolism and emotional charge of political rhetoric. In fact, lying within the tunnels are four singers, performing in operatic style fragments of speeches by key actors in the global theatre of recent political history: from Martin Luther King and the Dalai Lama, to George Bush and Saddam Hussein.

The speech fragments that are sung act as historical sediments, accumulated over time. They were first uttered in such a passionate and affective way, and had such a resonance, that the present can only be understood as an archaeological site created as a result of the impact and outcome of these powerful orations. From rallying-calls at times of national danger to expressions of moral outrage at the evils of war, the performers enact a range of voices: patriots and sceptics, radicals and conservatives, debaters and polemicists, campaigners and crusaders.

The singers’ physical position within the work also recalls the moments of climax in traditional opera, when a hero or heroine, mortally wounded or lying on their deathbed, deliver their final soliloquy. The performers bring these words back from the dead: isolated and highly mannered. The estrangement of this language from its original setting serves to underscore the allegorical dimension of these expressions, as something from the past that can resonate in the present, to alarming or admirable effects. At the same time, through the operatic delivery, the performances test the speeches’ original functionality, making them in- operative, while exploring the role of the spoken word as it is mediated across a continuum of expressivity: from the weighty depths reached through the grain of the voice to the artificial diction endemic to the language of opera and political speech alike. The cumulative result leads to a kind of frustrated opera: an

orchestra of battles, a contradictory and commemorative subterranean theatre driven by combustion of verbal explosions.

Allora & Calzadilla are also presenting Internal Combustion (Eye of the Needle), 2007. The new film addresses another recurrent trope in Allora & Calzadilla’s work: that of animality and its unstable relationship to the realm of the human. The video literalises an ancient figure of speech - the camel going through the eye of the needle - an expression found in Islamic, Judaic, and Christian traditions alike. The strength of this highly suggestive image remains powerful today - a large animal passing through the smallest of apertures, an image of the impossible. In their video, Allora & Calzadilla take the needle to be a tractor tire “miraculously” squeezed between the two humps of a Bactrian camel, an animal known to be first domesticated in Persia. Standing at a gas station in present day Tehran, this ancient mode of transportation forms part of the scene as a flow of vehicles come and go, moving the needles of their fuel gauges from empty to full.

This absurd scenario is critically underscored by its symbolic purchase on reality: with geopolitical tensions building between the West and Iran, much of which is hinged on the Uranium Enrichment Program that the Iranian government is currently pursuing to provide an alternative energy supply for its country, as it faces one of the most dramatic shortages of refined fuel in its history. Although Iran has over 9% of the world's oil reserves, rapid increases in demand and limited refining capacity have forced the country to import around 40% of its gasoline, at an annual cost of up to $7 billion to meet its consumption needs.

A century long struggle to gain full control of its natural resources and refining capacities has been punctuated by many events: from the exploits of the Anglo- Persian Oil company (later to be known as British Petroleum or BP), in the early part of last century; to the CIA backed overthrow of the first democratically elected government in the 1950s, after it nationalized the country’s oil fields; to the destruction toll of several oil installations during the decade long Iran-Iraq war; to current pressures by large international firms to negotiate contracts for the exploitation rights of oil and gas. Since the time of the Industrial Revolution, the political history of Iran and its relation to the rest of the world have been determined to a large extent by who has access to and control over the country’s black gold.

In the video, the camel stands among the mechanical apparatus of the day to day activities of the proverbial power depot - the lifeblood of the industrial based capital of Tehran and the very backbone of the world’s globalised economy.

Figures Of Speech, 2007, is a photographic work that continues the artists’ investigation into the meaning and impact of political rhetoric in the international arena. Utilizing images from recent world events, the newspaper cuttings spell out quotations, whereby the images collected function as letters forming a type of human alphabet. Allora & Calzadilla take up the tradition of creating figurative alphabets, composites of human figures that graphically form individual letters. Among historical examples are the medieval manuscripts of Giovannino de Grassi, the mannerist engravings of I. Paulini, and the art deco human fonts of Romain de Tirtoff, Erté. With Figures Of Speech the artists have created a contemporary extension of this form of calligraphy by utilizing photographic images from a collection of local and international daily newspapers. The letters made of pictures spell out iconic quotes ranging from Ronald Reagan’s statement “I Am A Contra”, delivered on 4 March 4 1987, addressing the nation on the

Iran Arms and Contra Aid Controversy; to the Ayatollah Khomeini’s famous statement “I Don’t Feel a Thing”, said in response to news reporter Peter Jennings’ question “What do you feel in returning to Iran?”. Khomeini’s statement has been often referred to by those who opposed him, as a proof of his heartlessness, and by those who supported him, as demonstrating his mystic aspiration and the selflessness of his revolution. Other statements include Saddam Hussein’s “God Is Greater, May The Cowards Be Defeated”, spoken to Iraqis on 3 September 1996, after the US missile attack on Iraq; and L. Paul Bremer’s announcement, on 13 December 2003, “Ladies and Gentleman, We Got Him!”, referring to the capture of Saddam Hussein.

Collaborative artists Jennifer Allora (b.1974, USA) and Guillermo Calzadilla (b.1971, Cuba) are based in San Juan, Puerto Rico, have worked together since 1995, and have established themselves as prominent figures in the international contemporary art scene.

Jennifer Allora, Guillermo Calzadilla and Jens Hoffmann are co-curating Apocalypse Now: The Theater of War at CCA Wattis Institute in San Francisco, on view from 30 November 2007 to 26 January 2008.

For Sediments Sentiments (Figures of Speech), 2007, opera singers will perform throughout the first week of the exhibition, from Wednesday 10 to Saturday 13 October. The artists are grateful to all performers for their engagement in the project: Nicholas Martin, Teresa Karcher, Chloe Billington, Julien Marc Roussel, Kevin McLaughlin, Kathy Bass and Sascha Michel. 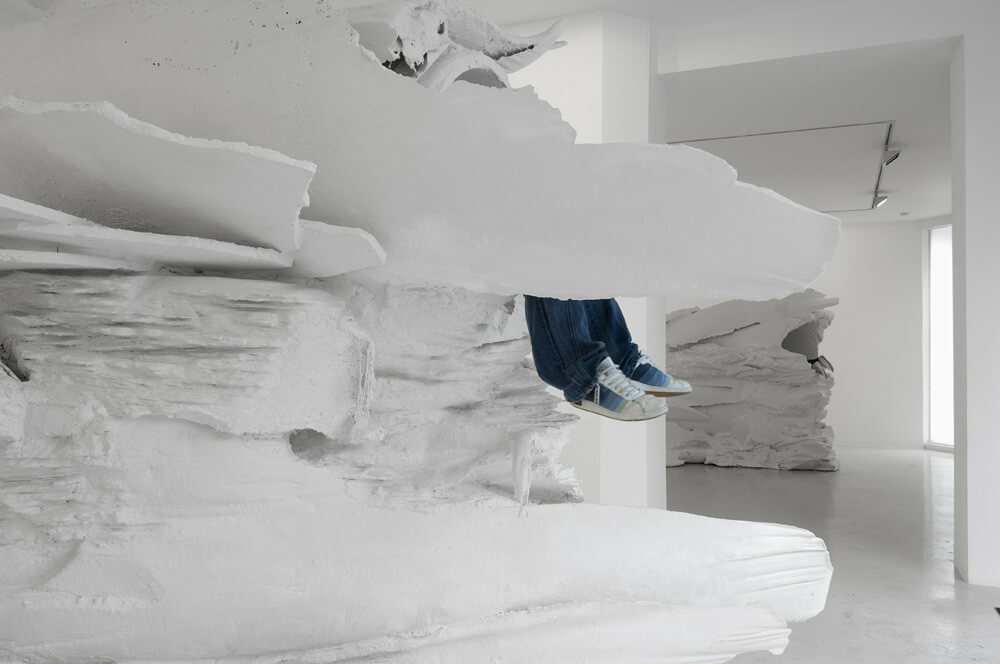 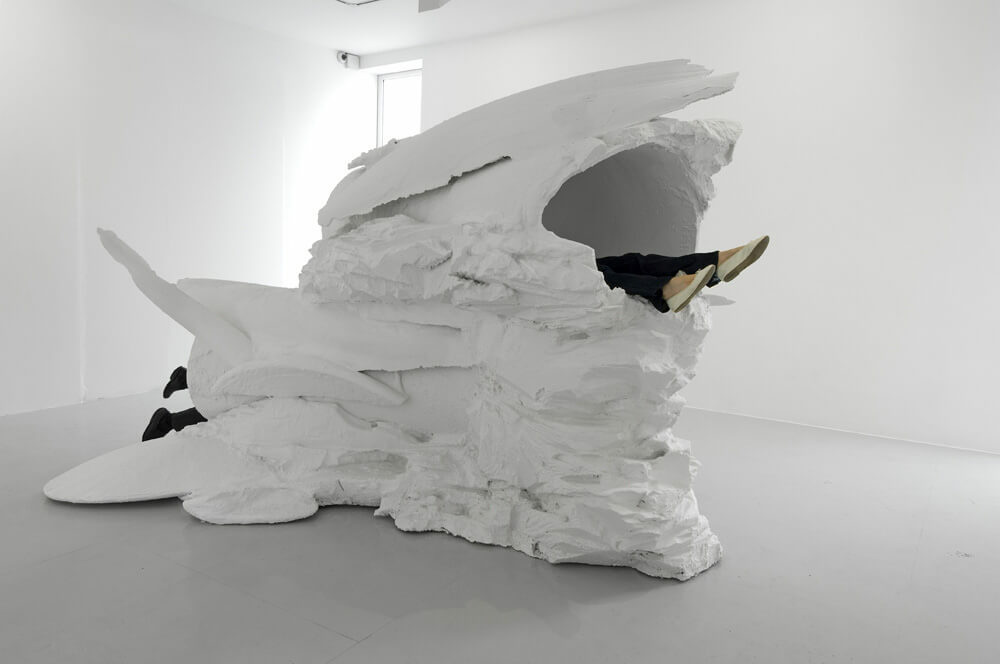