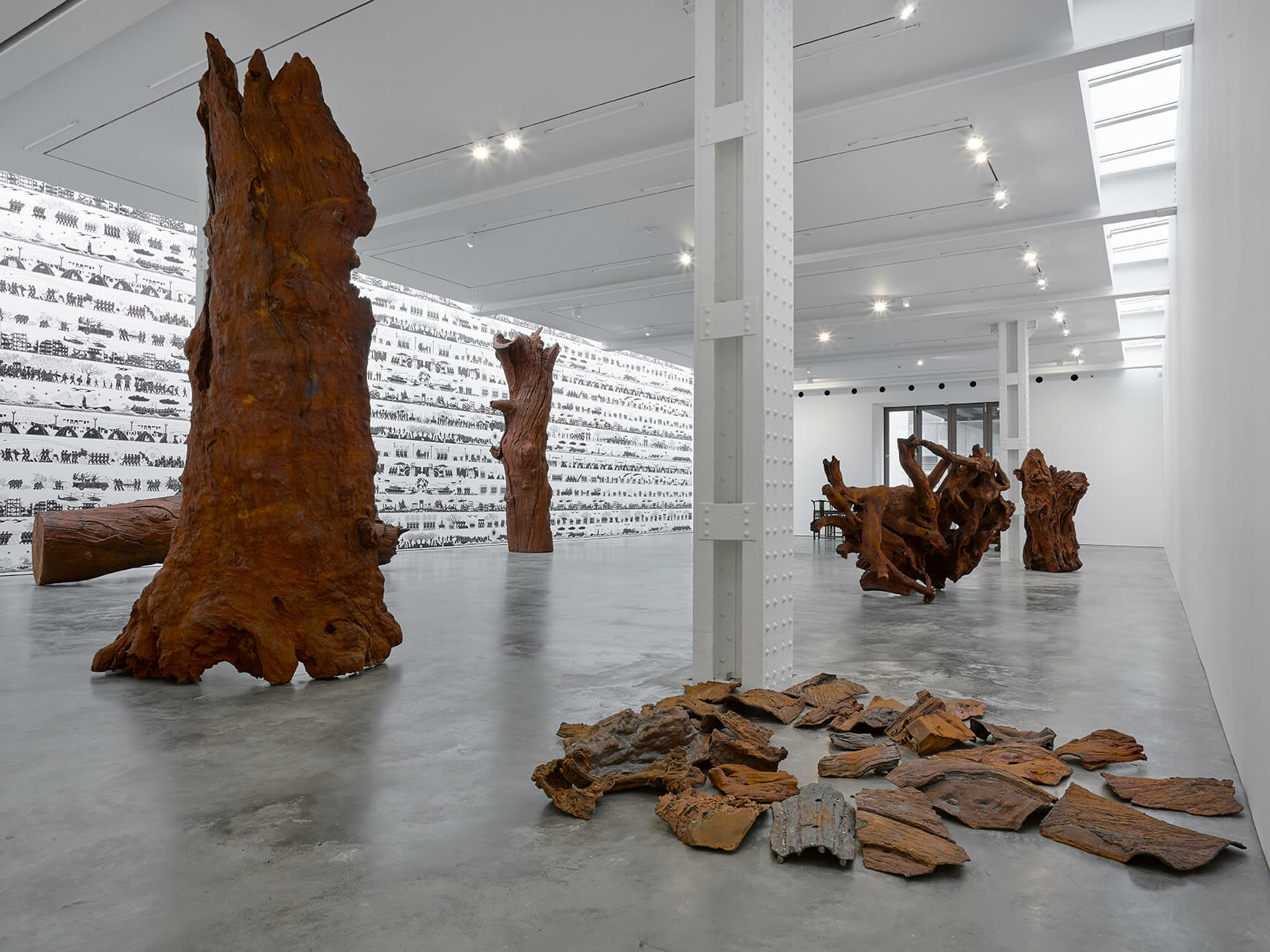 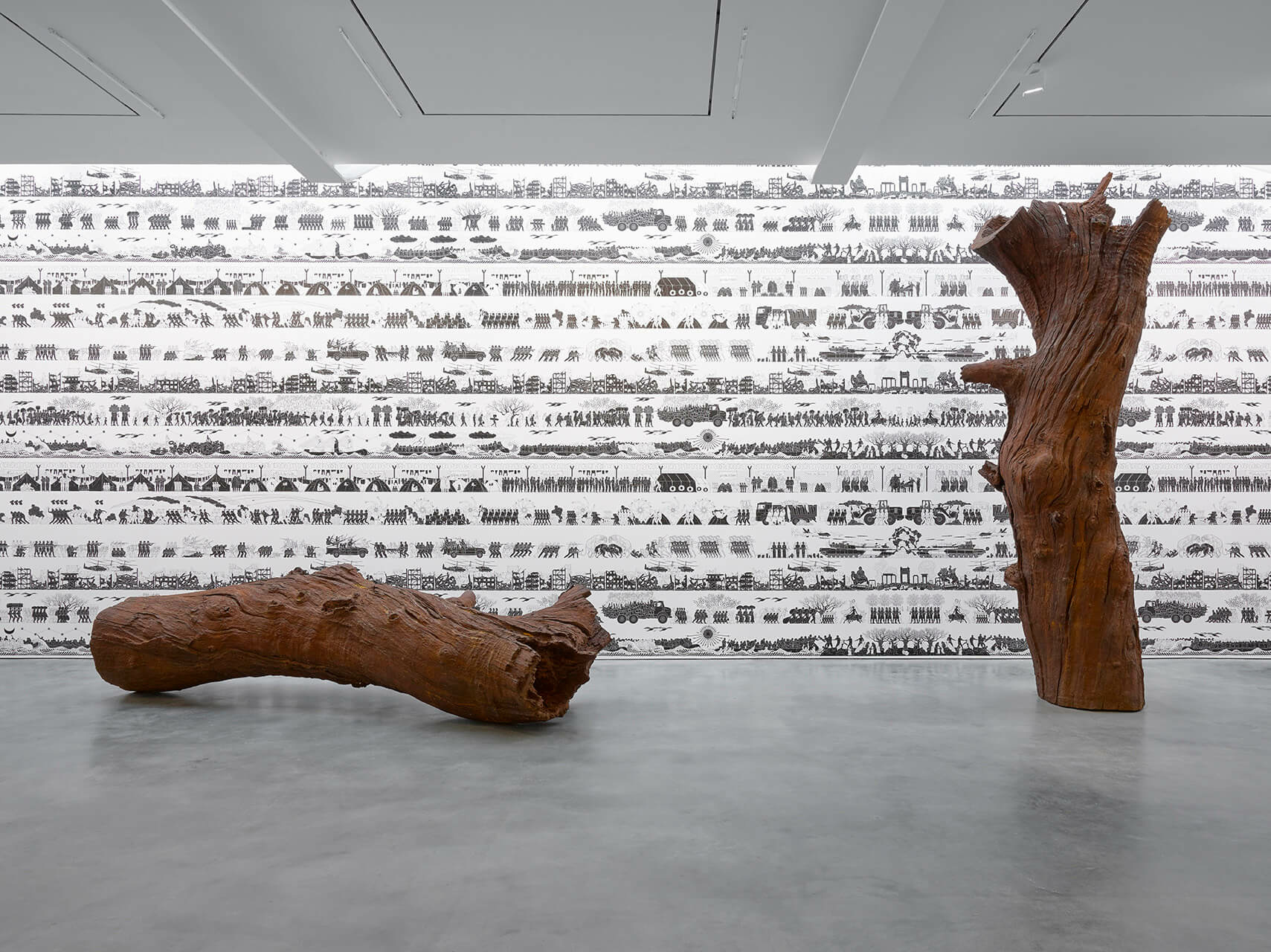 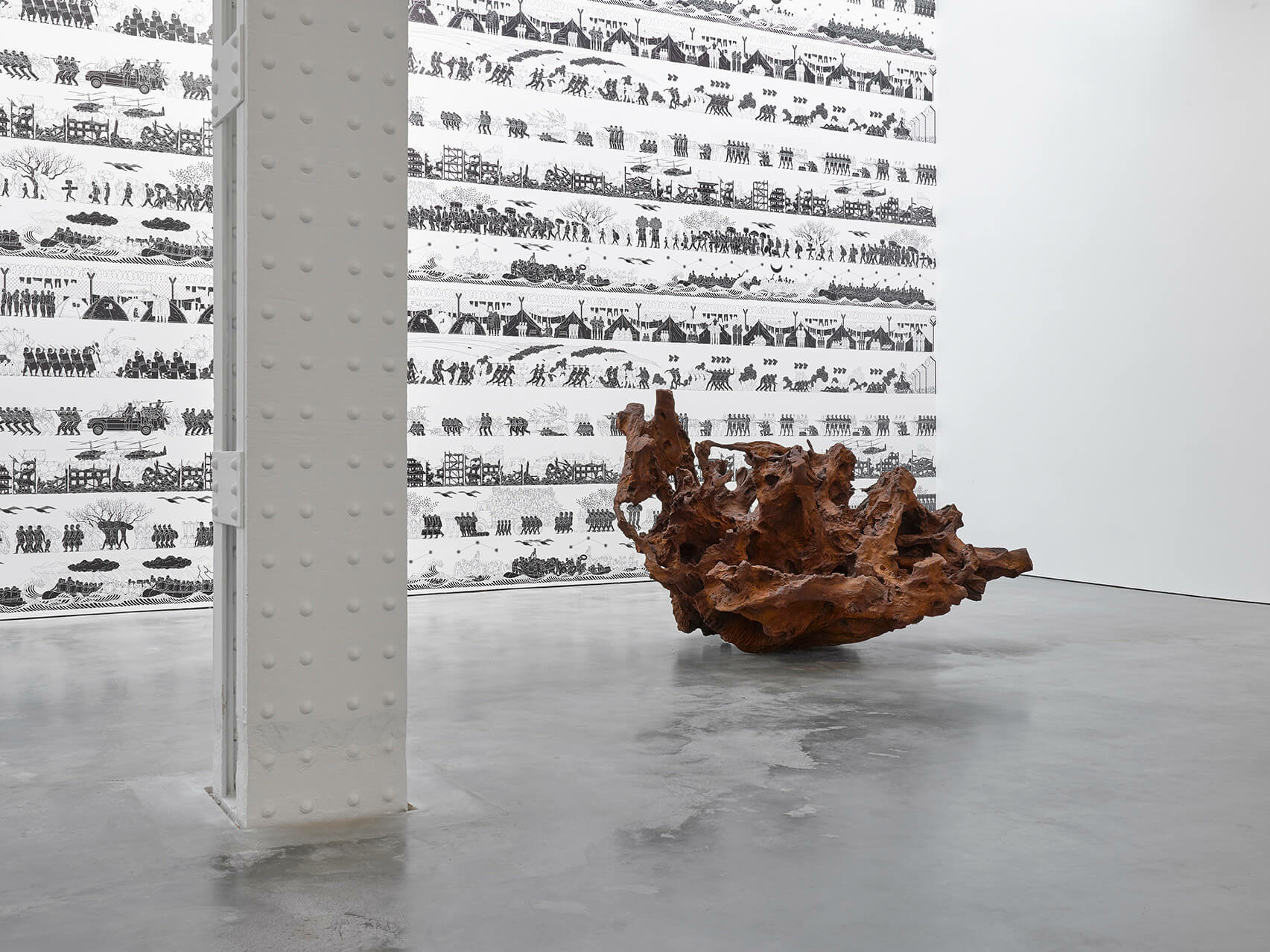 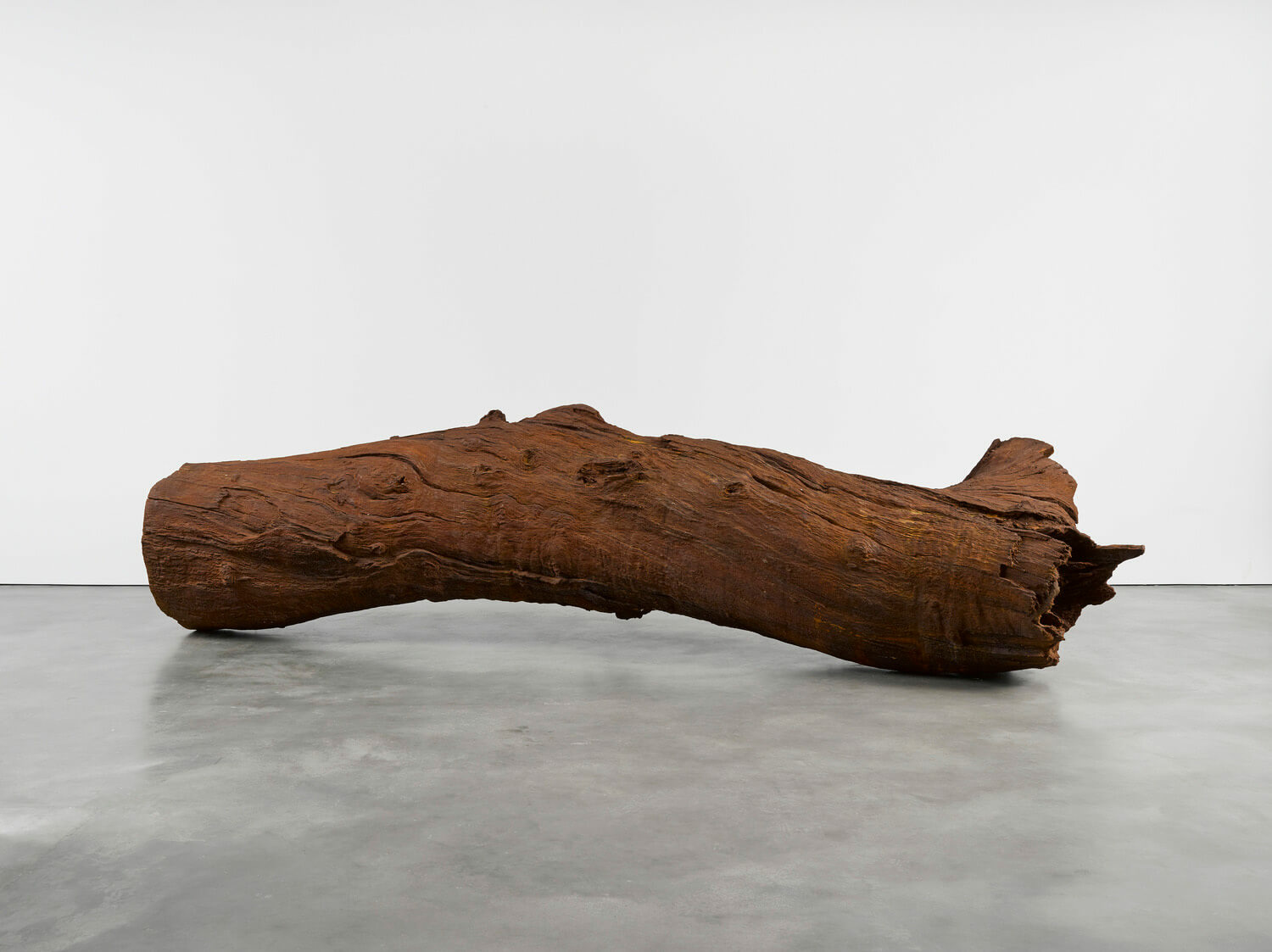 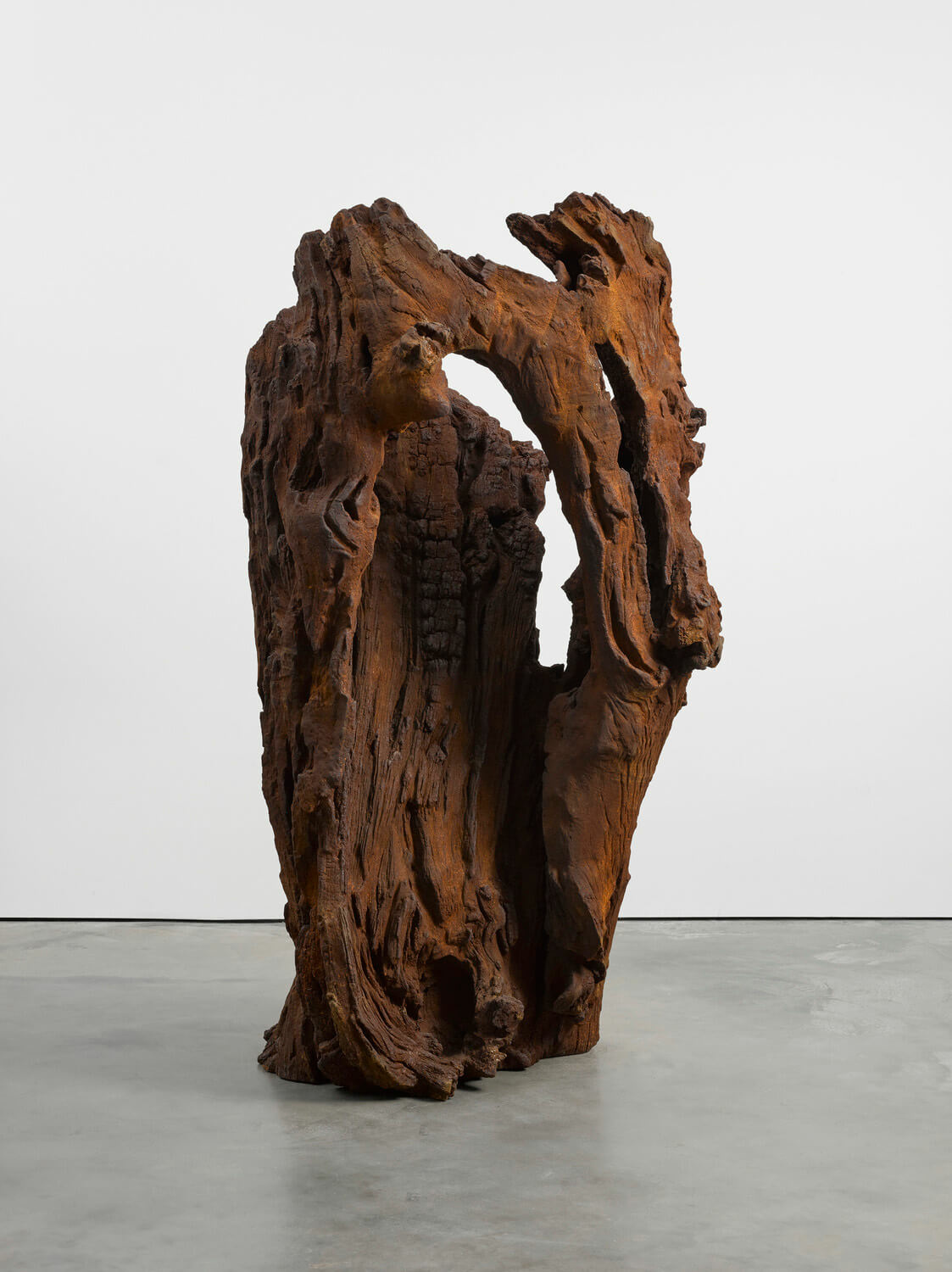 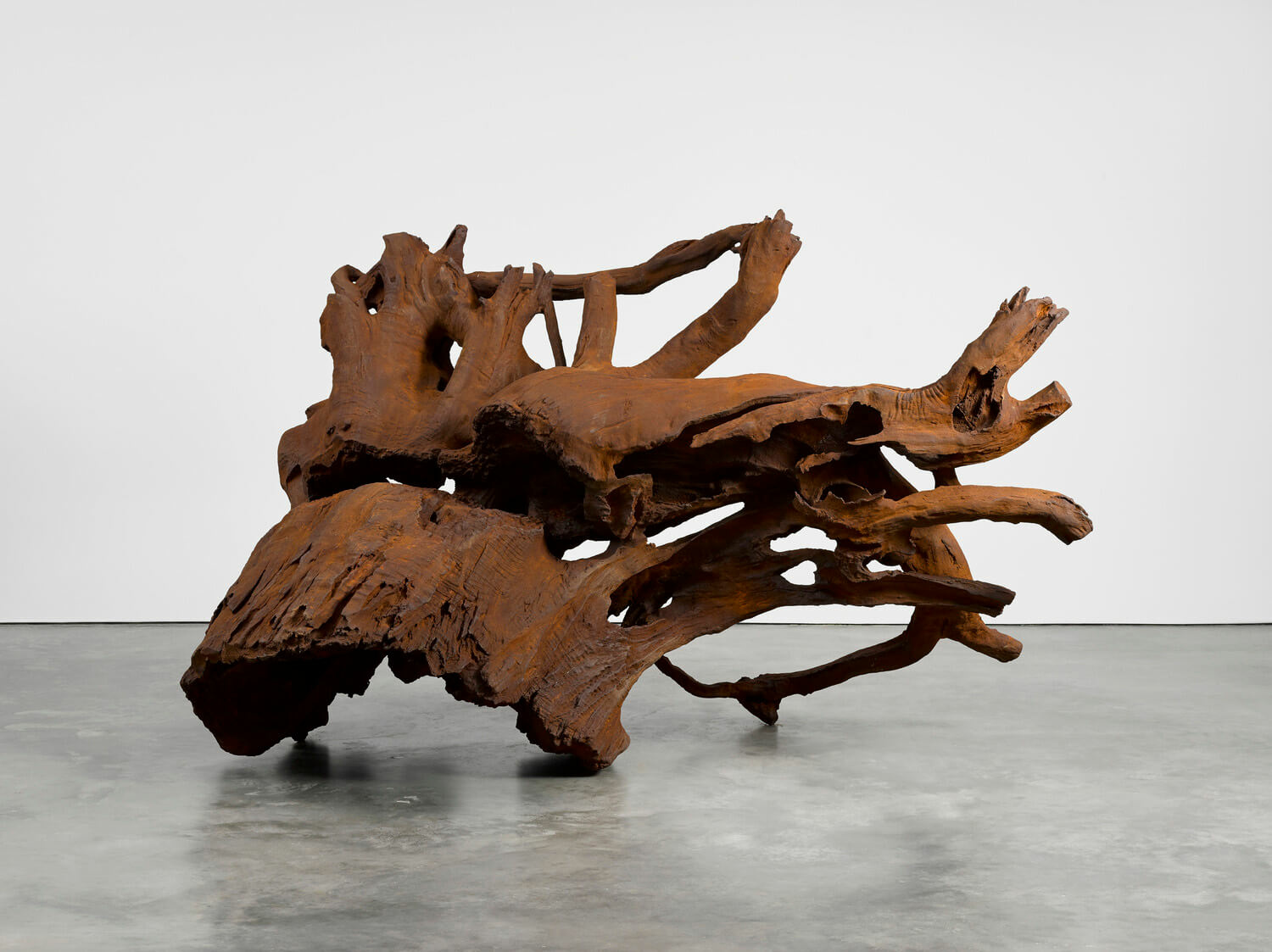 For his first solo exhibition with Lisson New York, Ai Weiwei populates the gallery with felled, cast-iron tree trunks, nearly sixteen feet in length, and a series of iron root sculptures set against the backdrop of a new wallpaper installation. Situated among the beams of the High Line exposed entirely in this exhibition for the first time, the seven sculptures on display combine to create a forest of displaced objects and reveal the artist’s interest in tradition and contemporaneity as well as the prevalence of displacement in post-modern societies.

Natural objects – from the sunflower seeds that carpeted Tate Modern’s Turbine Hall in 2010 to his series of porcelain rocks and watermelons – have been an ongoing source of inspiration for Ai Weiwei, with trees recurring as a spiritual motif in his work since 2009. These monumental wooden or iron multipartite sculptures are all composites of different parts of different trees gathered by the artist from various parts of China in reference to the ancient Asian tradition of collecting dry fragments of trees for contemplation of their complex forms.

Fragments also play an important part in Ai Weiwei’s work as they force attention on foundational elements and the most basic units that combine to create a whole. Here, in line with the artist’s worldview, the whole is not greater than the sum of its parts but rather each individual part is equal and of unique importance. This focus on equality is evidenced in recent projects by the artist that take as their starting point the refugee crisis and challenges to freedom of speech.

The iron roots and tree trunks shown in New York are presented in a natural, untreated state, appearing at first glance as organic forms, yet upon closer inspection, reveal their artificiality. Not born of nature but made by human hands, the works, themselves contorted by the surrounding landscape, represent a society uprooted by industrialisation and modernisation, illustrating how progress can often come at the expense of cultural and societal well-being. By eliminating their original function and value, Ai Weiwei imbues the objects with new meaning and forces us to confront them in a new light.

Elsewhere in New York, Mary Boone Gallery will present a parallel solo exhibition of work sharing the title ‘2016: Roots and Branches’, while Jeffrey Deitch will debut a new body of work by the artist titled ‘Laundromat’. In London this November, Lisson Gallery will exhibit Ai Weiwei’s immersive installation Fondation (2011). Ai Weiwei’s work was recently presented alongside the iconic pop artist Andy Warhol, who Ai Weiwei first encountered when he lived in New York in the late 1980s, in the critically acclaimed touring exhibition ‘Andy Warhol | Ai Weiwei’at the Andy Warhol Museum in Pittsburgh, PA. Palazzo Strozzi’s exhibition ‘AiWeiwei. Libero’, the first retrospective dedicated to the artist in Italy, runs from September 2016 until January 2017, when his work will also be the subject of a major exhibition at the Meijer Gardens in Michigan.